Home » The joy of helping Colin

The joy of helping Colin

(Republished with permission from the diocese of Fredericton eNews)

It’s odd to imagine that a sick’s boy’s plight, his impending brain surgery and the high cost of a trip to Texas to cure him could bring people joy, but that’s exactly what has happened.

“The most amazing thing for us is that churches have said, in their own way, this has brought them joy-our need is bringing joy to them. They’ve come together.”

Those words, from the Rev. Paul Ranson, aptly sum up the vast efforts and successes of fundraisers all over the diocese to help pay for the expensive laser brain surgery Colin, 2, needs. The family estimates $200,000 Cdn is needed to fund the surgery, travel, accommodations, follow-up and lost wages.

Archdeacon Brent Ham of St. John the Baptist in Riverview knows what Paul is talking about when he mentions joy in trying circumstances.

“There is a lot of joy in doing something good for a cause,” he said. 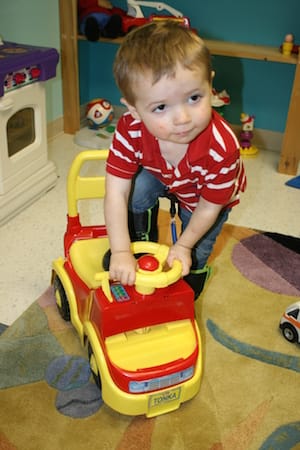 The Parish of Riverview and the Parish of Hillsborough held a joyful, successful event Nov. 22 that raised $3,600. They raised another $3,700 from personal and group donations within the church, and that total continues to climb.

“We couldn’t have asked for an event to go better,” said Brent.

That was despite a water line break in the neighbourhood that shut down the water for their spaghetti supper. It was restored just in time to do the dishes, he said.

The Parish of Hillsborough ran the bring & buy sale, and the Mothers’ Union cooked the meal, despite limited water availability.

But the surprise special guests were the biggest hit.

“The highlight for us was having Paul, Kimberly, Isaac and Colin come up. To have the family here was wonderful,” said Brent.

“We just wanted to be there as a family,” said Paul. “Colin ate a lot of spaghetti in Riverview!”

Colin’s condition, Pallister-Hall Syndrome, manifests itself in about 25 gelastic seizures each day and night, which cause manic laughter and crying he is unable to control.

“Colin has been pretty steady, but his seizures seem to be getting longer,” said Paul.

Their New Brunswick neurologist has sent the application for pre-approval to medicare, but whether the province will cover any costs is unknown.

“It’s sent off and we don’t know how long it should take,” said Paul, “But I’ve had a couple of MLAs ask if they can help.”

Without the surgery, Colin risks brain damage and learning disabilities. The longer the wait, the greater risk to his development and long-term health.

Asked what will happen if fundraising is not enough to pay for surgery, Paul said, “If we don’t make our target, we’ll push back the surgery date. But I’m convinced this is the right time.”

By all accounts, the fundraising is going extremely well.

“The response from across the diocese has been amazing,” said the Rev. Jasmine Chandra, fundraising co-ordinator. “This is what the body of Christ is meant to be – everyone heading toward the same goal. Everyone with the same heart.”

Jasmine admits to feeling the $200,000 goal was impossible in the beginning.

“But to have $70,000 in the first month! It’s a testament to what we can do together,” she said. “People are giving sacrificially. It’s a sign of God’s work in our hearts.”

In the meantime, Paul and Kimberly are overwhelmed by the generosity and the many promises of prayer for Colin.

“We are so thankful for everyone’s support,” said Paul. “It’s been a real blessing – and it’s really weird to say that but it’s true.”

Visit caringforcolin.ca for more information on Colin’s condition and to donate.