Home » Tales from the Road

Tales from the Road 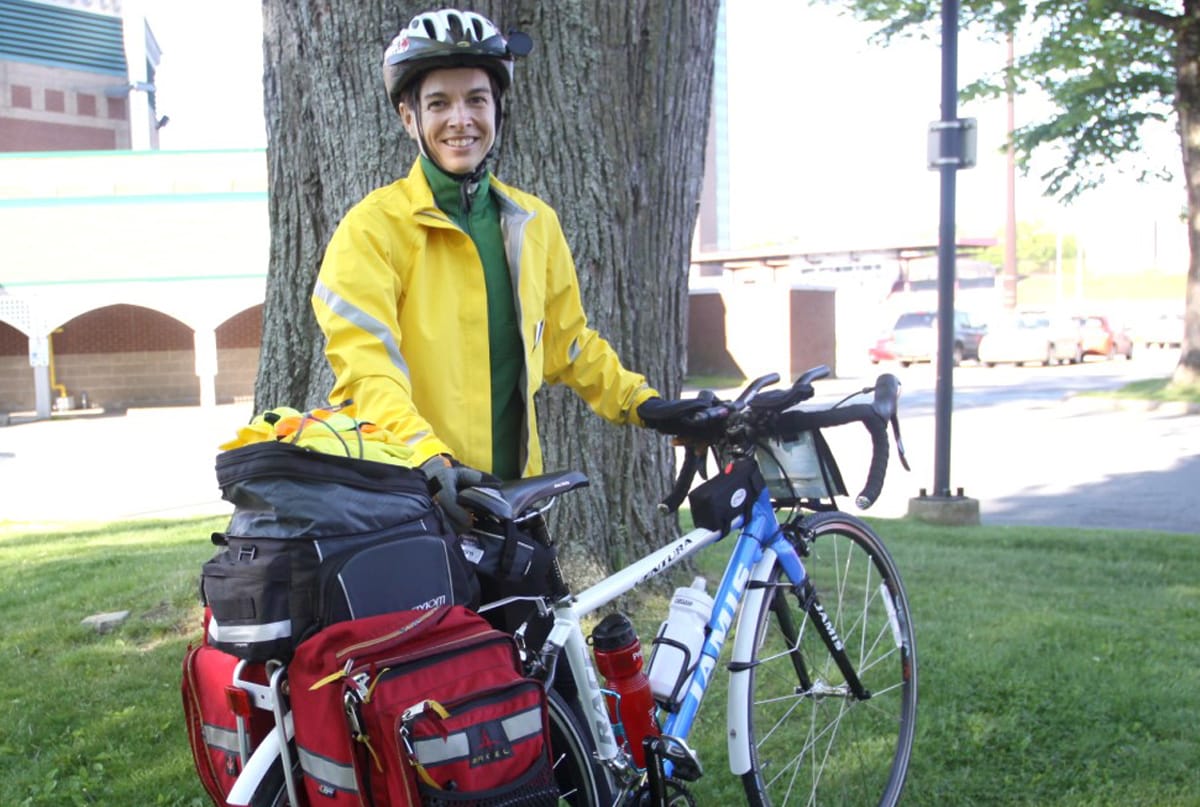 When Suzanne Rumsey of the Primate’s World Relief and Development Fund (PWRDF) set off from Halifax to ride 1,300 kilometres over an 18-day period to Sainte-Anne-de-Bellevue, Que., she really didn’t know what to expect. Since June 9, she’s put 1,200 km on her bike, Olive, and she admits that physically, it’s been quite a challenge. On the other hand, she told the Journal in an interview en route, the warm welcomes she’s received along the way has made it “a really positive experience.”

One moment that stands out is her arrival in Spring Hill, N.S., where more than 50 years ago, PWRDF was created following the Anglican response to a tragic mining disaster. To get into the town itself, Rumsey had to ride up Memorial Hill, which is very steep. Having already clocked 100 kilometres on her odometer that day, Rumsey had to walk Olive half way up. Once at the top, however, it was smooth sailing, Rumsey was able to glide right up to an Anglican church located on the main street. There, the Rev. Brieanna Andrews and a group from her congregation were waiting to greet Rumsey with a welcome sign and balloons. “It was just lovely,” Rumsey recalls.

Having a chance to spend time in the great Canadian outdoors has been another treat, says Rumsey of her trip to raise awareness and funds for PWRDF. Low points may have, ironically–but not surprisingly–come on the hills. On June 22, Rumsey crossed a section of the Appalachian Mountains on her way into Thetford Mines, Que. “It was the last 25 kilometres of the day and it was brutal. It was six long, steep hills, so I’m glad that part is done,” she said, laughing.

She’s had no mechanical problems, no injuries and the weather has been good. “It’s been pretty amazing how trouble-free the trip has been,” said Rumsey. With the exception of two, one-hour rainstorms, “I’ve been lucky,” she said in a phone interview. "I can’t complain at all.”

Rumsey is not sure exactly how much money has been raised yet. She’s been asking people to donate directly to PWRDF because she can’t carry money. She is hopeful she will raise $13,000, although she now realizes this adventure has been more about “building awareness and making connections….” She’s had speaking engagements every day as she travelled through Nova Scotia and New Brunswick, and will complete three in Quebec before the trip ends on June 26.

When she reaches Sainte-Anne-de-Bellevue, she will preach at St. George’s Anglican Church before flying home to Toronto on Sun. Jun. 27. By that time, she expects she will have cycled about 1,600 kilometres, 300 more than originally planned.