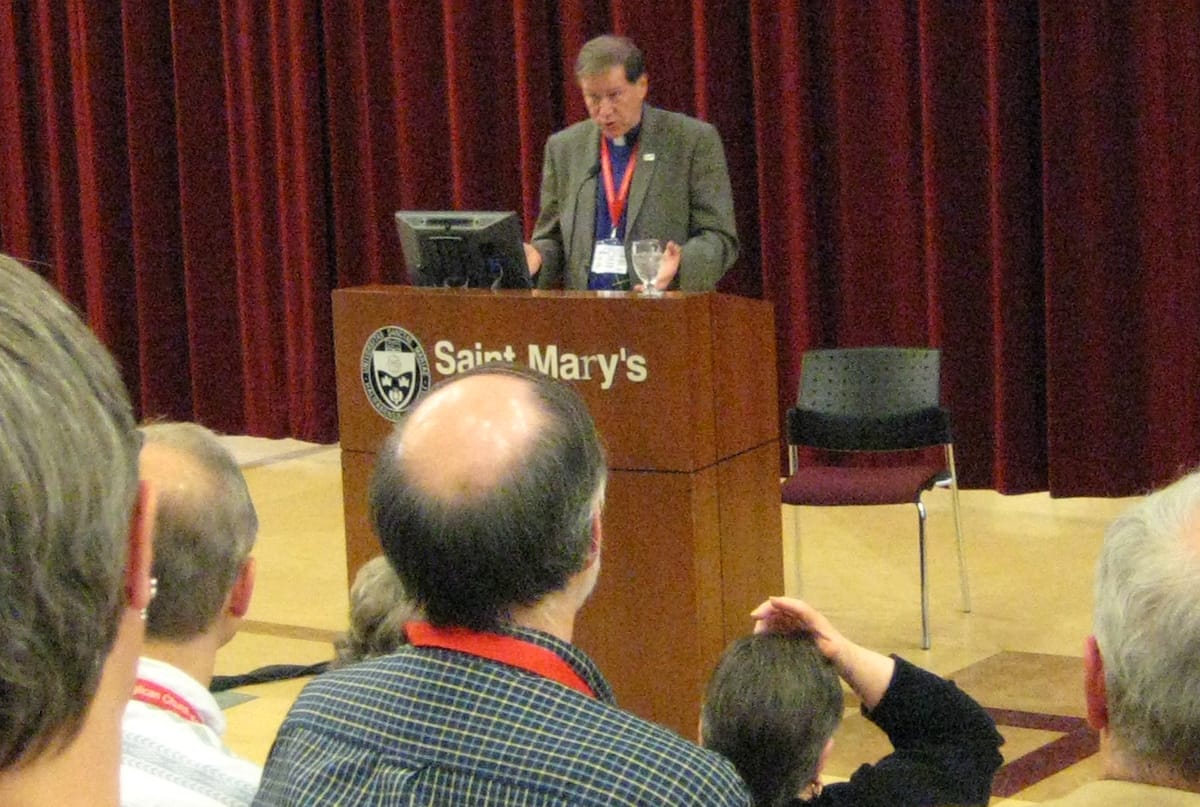 Archbishop Fred Hiltz, primate of the Anglican Church of Canada, received a standing ovation from the Anglican Communion Alliance after he explained his position on the issues surrounding the blessing of same-sex blessings and interventions by foreign primates in Canadian dioceses.

The group, formerly known as the Essentials federation, is made up of conservative Anglicans who want to remain in the Anglican Church of Canada but disagree on the issue of same-sex blessings. In a statement given to the primate in a meeting at General Synod 2010 in Halifax, the group applauded the head of the Anglican Church of Canada for creating an “atmosphere…where genuine dialogue can take place.”

The 50 people present, however, had questions about Archbishop Hiltz’ criticism of cross-border interventions. They also said he had not “addressed the pain felt by many” caused by the same-sex blessings.

In addition, the group expressed concern about his position on the Anglican Covenant which is being promoted by the Archbishop of Canterbury as a way to resolve disputes within the Anglican Communion. The Primate said he wants the Anglican Church of Canada to consider it, and to contribute to the process, even though some people want the Covenant adopted now. “To push that, to force the issue, I think denies the church the opportunity to consider it in depth, and to make the helpful, prayerful, thoughtful response that we as a church ought to be committed to,” said Archbishop Hiltz. “I’m not ditching the Covenant, I’m not dismissing it,” he continued. “But if I have a concern about a particular section, I think I have a responsibility to name that.”

He also said he is “puzzled” by the actions of the Archbishop of Canterbury in imposing sanctions on The Episcopal Church in the U.S. when no one has yet adopted the Covenant. “I find it very difficult to see the cross border interventions inside dioceses where there has not been serious and lengthy conversations about the blessing of same-sex unions in synod. Why are people intervening in the dioceses when in fact that diocese has made no statement from a synodical point of view? But the planting goes on throughout dioceses in the Canadian church.”

Three former Canadian bishops who retired left to serve as bishops under the jurisdiction of the Primate of the Southern Cone is South America. Archbishop Hiltz said he wished some of them could have tried to work within the church. “If I had my prayer answered, people like Donald Harvey, or Ron Ferris, or Malcolm Harding would be offering themselves to metropolitans in the dioceses in which they reside. I would have loved to have seen that happen.”

Their departure means a resource has been lost, added Archbishop Hiltz. “I wish they could see a way to offer their services to the Anglican Church of Canada.”

At the end of the meeting, a prayer was offered up by members of the group for Archbishop Hiltz before he left for a General Synod session. Brett Cane, chair of the Anglican Communion Alliance, expressed appreciation for the fact that Archbishop Hiltz had agreed to talk to the group. His group has as much passion for the unity of the Canadian church as does the primate, said Cane.