Stretching all the way from the dining room to the plenary area, the display booths lining the halls at the Sheraton Parkway Toronto North Hotel & Suites represent a plethora of organizations and causes as diverse as those gathered together for the Anglican Church of Canada’s General Synod 2016. A total of 48 displayers are present at this year’s synod, with space having sold out before the beginning of the event.

The pictures and items on display range from the painstakingly detailed timelines charting the evolution of the relationship between Canada’s Indigenous peoples and the Anglican Church of Canada found at the booth belonging to the General Synod archives, to the intricately detailed vestments found at Broughton’s Church Supplies and Creative Spirit, to a set of finely made, leather-bound Bibles translated into different languages at the Canadian Bible Society. 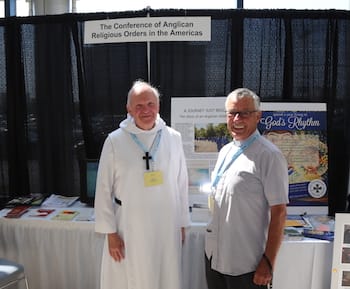 The booth of the Indigenous Spiritual Ministry of Mishamikoweesh not only featured information about its ministries but also handmade beaded moccasins and necklaces for sale.

A number of booths are especially relevant to this year’s General Synod, given the upcoming vote on the marriage canon. One such display, created by Advocates for Changing the Marriage Canon and titled “Our Voices,” features numerous handouts carrying personal stories from LGBTQ+ [Lesbian, Gay, Bisexaul, Transsexual, Queer/Questioning and others] Anglicans detailing their experiences as members of the Anglican Church of Canada. The display’s backdrop is a collage of pictures of smiling LGBTQ+ Anglicans accompanied by captions such as “Your Parent,” “Your Sibling” and “Your Friend.”

Roseanne Kydd, at the booth for the Anglican Communion Alliance (ACA), said the level of interest she has received from General Synod attendees has been high. “We’ve had a wonderful response so far,” she said, adding that they’re already into the second and third runs of several informational pamphlets prepared by students at Wycliffe College in Toronto.

Delegates have also had an additional reason to swing by the ACA’s booth. Yesterday, they offered up a much sought-after Uncle Tetsu’s Japanese Cheesecake as a prize for the lucky winner who could identify the following quote: “You have made us for yourself, O Lord, and our hearts are restless until they rest in you.” (The answer? St. Augustine.)