Home » Primates outline their roles, commit to ‘journeying together in honest conversation’

Primates outline their roles, commit to ‘journeying together in honest conversation’ 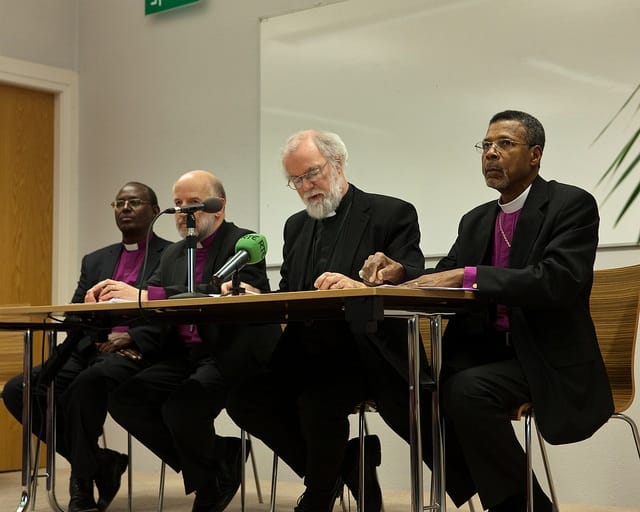 The primates of the Anglican Communion have spent much of their Jan. 25-30 meeting in Dublin, Ireland, developing a working document that outlines the nature and responsibility of their roles as church leaders and emphasizes their commitment to working together "in faith, hope, and love … to build our communion and further the reign of God."

The primates agreed that their key responsibilities are providing a focal point for unity, addressing pressing issues of global concern and advocating for social justice.

"By God’s grace we strive to express … unity in diversity which is the Spirit’s work among the churches of the communion and the community of primates," the document says. "In our common life together we are passionately committed to journeying together in honest conversation."

The primates have written letters addressing several global and domestic issues, such as gender-based violence, the crisis in Zimbabwe, Christian persecution in Pakistan, instability in Egypt, and national division in Korea.

A letter to the Israeli prime minister underscores the primates’ concern that the resident permit of Anglican Bishop in Jerusalem Suheil Dawani has been suspended, making it difficult for him to carry out his pastoral responsibilities. Another letter offers prayers and solidarity to Archbishop Daniel Deng Bul and the Episcopal Church of Sudan in light of the country’s recent referendum on independence.

In three separate statements, the primates spoke out on climate change, the ongoing crisis in Haiti in the aftermath of the devastating January 2010 earthquake, and deplored the murder of Ugandan gay rights activist David Kato, who was bludgeoned to death in his home community on Jan. 26. In the latter statement, the primates reaffirmed that the Anglican Communion condemns violence against members of the lesbian, gay, bisexual and transgender community.

Presiding Bishop Katharine Jefferts Schori, who represents the Episcopal Church at Primates Meetings, said: "It’s been a wonderful meeting, filled with grace, challenging conversations, but a clear sense that everyone is working together."

"The first priority has been to build a working community of primates, to build relationships," she told ENS following the meeting, adding that she is grateful for the prayers of Episcopalians and Anglicans around the communion. "Your prayers have borne fruit in this place," she said.

Fourteen primates were absent from the meeting for various reasons including health issues and diary commitments, but seven stayed away because of Jefferts Schori’s presence and recent developments supporting the full inclusion of gay and lesbian people in the Episcopal Church.

"Conversations can be difficult with anyone. If we’re not willing to continue in conversation, there’s not much opportunity for healing or reconciling. We need to come to the table," she said. "I certainly hope and pray that my brothers who’ve stayed away can find it in their hearts at some point to come back to the table."

Earlier in the day, Jefferts Schori preached at the 9 a.m. Sung Eucharist service at Christ Church Cathedral in Dublin, Ireland. "We’re challenged in this very body to ‘show up,’ to present ourselves ready, willing, and able to help heal this broken world," she said during her sermon.

During a press briefing following the meeting, Archbishop of Canterbury Rowan Williams said that "the fact remains that two thirds of the body of primates was present and something like three quarters, possibly a little more, expressed their willingness to be present but were unable for one reason or another. That means that two thirds of the primates at least wish to continue to meet and wish to continue the conversations they’ve begun."

Williams said that he and his fellow primates are committed to building relationships both with those who’ve attended the meeting and those who’ve chosen to stay away.

"We’ve been aware, sometimes painfully aware of those not with us. We’ve prayed for them daily. We are committed to maintaining relationship with them," Williams said. "But no meeting can allow itself to be shaped wholly by the people who are not there."

Archbishop Bernard Ntahoturi of the Anglican Church in Burundi told the media that the issues that the boycotting primates have raised are "very understandable. But what we have to understand is that the Anglican Communion is like a family."

An audio stream of the press briefing is available here.

The purpose of the Primates’ Standing Committee also was addressed, with the primates agreeing the body should "care for the life and spirit of the Primates Meeting between meetings [and] act as a consultative council for the archbishop of Canterbury."

Earlier in the week, the primates discussed the work of ecumenism in the communion; how to best share the gospel with the world; and how communion members could hold different positions but still work together.

In a BBC Radio interview prior to the meeting, the Rev. Canon Kenneth Kearon emphasized that the Primates Meeting is not a decision-making body. "It is a body which issues guidance and indicates direction," he said. "It has a lot of moral authority based on the fact that it is composed of primates but it isn’t a body that votes on resolutions, it doesn’t have that kind of procedural or constitutional nature."

Primates are the senior archbishops and presiding bishops elected or appointed to lead each of the 38 autonomous provinces of the Anglican Communion. They are invited to the Primates Meetings, which are held every two or three years, by the archbishop of Canterbury to consult on theological, social and international issues.

The Primates Meeting is one of the three instruments of communion in the Anglican Communion, the other two being the once-a-decade Lambeth Conference of bishops and the Anglican Consultative Council, the communion’s main policy-making body. The archbishop of Canterbury, as primus inter pares, or "first among equals," is recognized as the focus of unity for the Anglican Communion.

Each province relates to other provinces within the Anglican Communion by being in full communion with the See of Canterbury. Archbishop of Canterbury Rowan Williams calls the Lambeth Conference, chairs the meeting of primates and is president of the ACC. Kearon serves as secretary to the instruments of communion.

In some Anglican provinces the primate also is called archbishop and/or metropolitan, while in others the term presiding bishop — or as in Scotland, primus — is used.

The united ecumenical churches of North India, South India and Pakistan are led by moderators, who also are invited to the Primates Meetings by the archbishop of Canterbury.

The Primates Meeting was established in 1978 by Archbishop Donald Coggan (101st archbishop of Canterbury) as an opportunity for "leisurely thought, prayer and deep consultation."

The provinces and primates of the Anglican Communion are listed here.