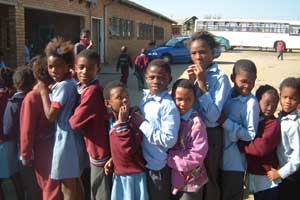 PWRDF supports projects that care for HIV-AIDS orphans in Africa. The development organization’s Partnership for Life Campaign aims to raise $1 million for HIV-AIDS projects but is stalled at $500,000.

The Primate’s World Relief and Development Fund (PWRDF) has been working to revitalize its Partnership for Life Campaign: For a Generation Without HIV-AIDS, which has a goal of raising $1 million to help increase the capacity of its partners here and overseas to fight the scourge of the deadly disease.

“One of the major challenges has been the number and magnitude of emergencies,” particularly in 2005, said Adele Finney, PWRDF communications co-ordinator. She noted that Canadian Anglicans had given generously for the victims of the tsunami that hit parts of Asia, hurricane Katrina in the Gulf Coast, the earthquake in India and Pakistan, among others. Relief funds were also set up for victims of a December 2003 earthquake in Iran and of hurricanes that hit parts of the Caribbean in September 2004.

Ms. Finney acknowledged that staffing issues have likewise affected the campaign – three senior PWRDF staff, including the director, Andrew Ignatieff, left in 2004 and it took time to find their successors.

The stigma of HIV-AIDS, including myths that it is confined to developing countries or that it only afflicts homosexuals, has also been a contributing factor. “Yes, there’s still a wall,” said Ms. Finney, adding that fighting the HIV-AIDS stigma has been a priority of PWRDF’s partners in Africa, where the highest number of HIV-AIDS cases are found.

“Stigma exists in all societies, including ours. It affects how ready we are to give financially, whether or not we think people with AIDS are responsible for their disease,” said Ms. Finney. “More importantly, it affects how ready we are to befriend and accompany people living with AIDS in our own communities.” She added that stigma also affects the “availability, access and delivery of health care.”

A General Synod resolution from 2004 specifically targeted the eradication of AIDS-related stigma and discrimination and asked PWRDF to develop a comprehensive education strategy to achieve this goal. Ms. Finney said this strategy would be developed as the Anglican Church of Canada gets involved in the International AIDS Conference to be held in Toronto from Aug. 13 to 18. A two-day ecumenical pre-conference is scheduled from Aug. 10 to 11.

To raise the profile of its Partnership for Life campaign, PWRDF has created a new Web site, www.partnershipforlife.ca, where parishes and individuals may download materials to bolster community or church initiatives on HIV/AIDS. The resources include suggestions for involving church and community groups in HIV/AIDS campaigns, worship resources, and HIV/AIDS information. It also includes stories about HIV/AIDS fundraising campaigns that have been launched by parishes and individuals across Canada.

Archbishop Andrew Hutchison, primate of the Anglican Church of Canada, has issued a letter urging Anglicans to support the campaign. In his New Year’s message, delivered at Ottawa’s Christ Church Cathedral, he reiterated his request citing that in 2005 alone, six million people died of HIV-AIDS.