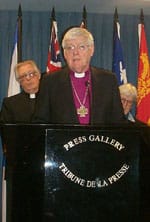 Archbishop Michael Peers at a press conference of church leaders on Parliament Hill: Civilian casualities were predictable outcome of bombing.

Archbishop Michael Peers and other church leaders have urged Prime Minister Chretien to press for a unilateral moratorium on NATO’s bombing campaign in the Balkans during a rare meeting on Parliament Hill, but came away without a commitment.

It was the first formal meeting between church leaders and a Canadian prime minister in 16 years, the Primate of the Anglican Church of Canada noted at a news conference following the one-and-a-half-hour meeting with Mr. Chretien and Foreign Affairs Minister Lloyd Axworthy on April 15.

It was predictable that the NATO bombing campaign would not stop Serbian leader Slobodan Milosevic, the archbishop said in response to a reporter’s question. And even those Serbs who had openly opposed Mr. Milosevic in the past, now find themselves “no more in favour of Milosevic as a person, but united in their concerns about their country, which they perceive to be besieged by the West,” he said.

The Primate said it was clear before the bombing attacks began that civilians could be causalities.

“And what is euphemistically called ?collateral damage’ is absolutely, certainly, going to be a reality.” But it was a consequence that “was there from the very beginning,” he said.

With Archbishop Peers were the senior leaders of seven other member churches of the Canadian Council of Churches including Msgr. Peter Schonenbach, general secretary of the Canadian Conference of Catholic Bishops. The United Nations should be “brought back into the picture,” said the Catholic Church official.

“It’s important that we do not create these precedents that pull us away from the proper forum for the international solution to these questions, the United Nations.”

The delegation also asked the prime minister to encourage a wide range of diplomatic alternatives to the bombing attacks.

“It’s not just that the bombing would be stopped and there would be no other activity,” said Rev. David Pfrimmer, chair of the CCC’s Justice and Peace Commission. Other initiatives need to be developed and strengthened at the same time, he said.

The church leaders termed their meeting with the prime minister successful but none would comment on Mr. Chretien’s response to their concerns. Janet Somerville, executive director of the Canadian Council of Churches, suggested reporters ask the prime minister himself.

In the House of Commons later in the day, Mr. Axworthy said the meeting “was one of those particularly important exchanges because of the morality and the sense of urgency the churches brought.”

He also said the delegation understood as well that “Canada is actively engaged in trying to stop as much as it can through NATO, the persecution, the violation, the harassment and the deportation of hundreds of thousands of Kosovars.”

Archbishop Peers, in an interview with the Journal, said the meeting between the church leaders and the prime minister met the “expectation of preachers everywhere – that you get heard. And once you get heard, then, perhaps the people are prepared to act on what they hear.”

The churches had originally asked for the meeting to press for global nuclear disarmament but the crisis in Kosovo was added to the leaders’ agenda.

Among their concerns was the missile base defense system proposed by the United States which, they said, could mean increased spending on armaments and undermine arms control and peace building.

The archbishop pointed out that Canada is a country that has taken the lead on issues such as banning land mines and controlling small arms. It should be taking a strong lead on nuclear disarmament as well, he said.

In a letter sent to the prime minister two days earlier as part of the joint initiative of the national church councils in Canada, the U.S. and Europe, the churches said that nuclear weapons “have no moral legitimacy” and that even their legality under international law is “in serious question.”

The national councils called upon the governments of NATO members to ensure that their new strategic doctrine affirms the organization’s support for the rapid global elimination of nuclear weapons.

Other members of the delegation were Anglican Archbishop Barry Curtis, president of the CCC, Bishop Seraphim of the Orthodox Church of America (Canada diocese), Virginia Coleman, general secretary of the United Church of Canada, Carol Dixon of the Canadian Friends’ Service Committee (Quakers), Rev. Stephen Kendall, principal clerk of the Presbyterian Church in Canada, and Ernie Regehr, director of Project Ploughshares, the Canadian ecumenical disarmament group.

Art Babych is a freelance writer based on Parliament Hill in Ottawa.