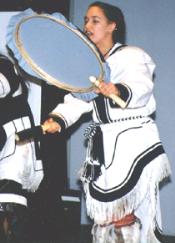 Two entertainers from Agsarniit, an Inuit dance troupe, demonstrate drum dancing during their on-stage performance at the opening ceremonies of the mid-winter Qaggiq at Christ Church Cathedral in Ottawa.

Ottawa
Bannock anyone? How about a tasty bowl of Caribou stew? The congregation of Christ Church Cathedral in Ottawa not only sampled Inuit food but also learned to sing hymns in Inuktitut, the language of the Inuit.

The occasion was a two-day mid-winter Qaggiq – an Inuit festival – organized by cathedral parishioners to celebrate Nunavut, which will become Canada’s newest territory on April 1. It included demonstrations of soapstone carving and sewing, entertainment by a troupe of Inuit performers, a concert by the cathedral choir and the first visit to Ottawa of suffragan bishop Paul Idlout of the Arctic.

Bishop John Baycroft of the Diocese of Ottawa noted at the opening ceremony Feb. 20 that he and Bishop Idlout meet at least twice a year. “We pray for each other on a regular basis because we do believe that we are brothers in Christ,” he said. To the group of about 100, including Inuit artists and entertainers, Bishop Baycroft said “We not only welcome you but we truly believe that we are sisters and brothers in Christ, that this is our father’s house and we hope that you will feel at home here.”

Bishop Idlout delivered the opening prayer speaking in both English and Inuktitut.

The bishop from the Arctic had arrived the previous night and managed to catch a rehearsal of the cathedral choir rehearsing for its premiere performance the next evening of Light, an ancient Inuktitut poem set to music. He told the Journal he was thrilled and surprised to hear the poem performed in southern Canada.

As well, he said, the people of the North are pleased that they will soon have their own government. “I was talking with a friend and he said we will see a change in the life of our parish and communities,” he said. The Nunavut Land Claims Agreement, settled in 1993, is the largest land claim ever settled in Canadian history. It fulfills the dream of the Inuit, who make up 85 per cent of the population of the new territory, comprising one-fifth of Canada’s total land mass.

The idea for the Qaqqig came from Garth Hampson, a cathedral parishioner and volunteer worker who, as a former RCMP officer, was stationed in the North for several years. “A lot of southerners know nothing about the North,” he said in an interview. “If we’re getting a new territory, we should knowa bit about what’s up there, what are the boundaries, and about the people.”

The cathedral’s Qaggiq also showcased Inuit art and crafts and drum-dancing by an Inuit group known as Aqsarniit, and a Sunday morning church service with Bishop Idlout and the Cathedral Choir.