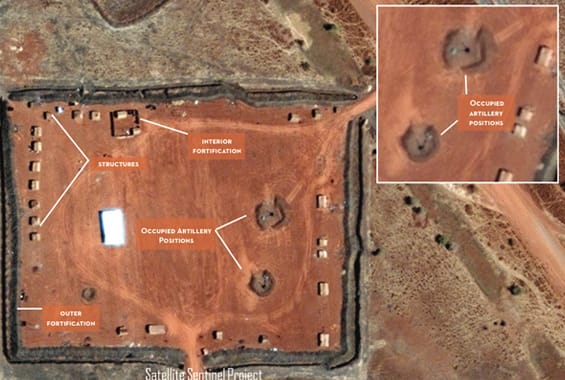 “Friends, brothers and sisters, children, my flock, have been killed mercilessly….”

[A little more than two weeks] after South Sudan celebrated its long-awaited independence, Bishop Andudu Adam Elnail of the Episcopal Diocese of Kadugli has said it is "devastating and saddening" to learn that his people of the South Kordofan region, "friends, brothers and sisters, children, my flock, have been killed mercilessly and are lying now in mass graves in Kadugli."

Elnail was responding to the Enough Project’s Satellite Sentinel report that revealed the extent of the atrocities committed along the north-south border in recent weeks and identified what it says are three vast excavated sites used to dump the bodies of those who’ve been slaughtered.

Parkins said that the latest atrocities depict "in graphic and compelling terms the extent to which the Government of Sudan has committed the extermination of civilians in Kadugli and further confirms what many have claimed that the elimination of persons from this area are victims of genocide."   The Satellite Sentinel Project (SSP) has revealed visual evidence of mass graves in South Kordofan, which it says "corroborates new eyewitness reports…of systematic killings and mass burials in this conflict-torn region of Sudan," the report noted. "The evidence found by SSP is consistent with allegations that the Sudan Armed Forces (SAF) and northern militias have engaged in a campaign of killing civilians."
Elnail, whose cathedral and home in Kadugli have been destroyed by the incursions, asked people around the world to "open your eyes and your heart for the suffering of the people of South Kordofan. To me, these people are not numbers and statistics but people I interact with in the market, in the church pews, in schools and villages."

By chance, Elnail had traveled to the United States for medical treatment before the attacks began. As he is unable to return home to Kadugli, he will remain in Baton Rouge indefinitely with Deacon Jim Tomkins of the Diocese of Louisiana.

In a statement e-mailed from the Enough Project, Elnail called on the U.S. and the larger international community to send an effective peacekeeping force to monitor the situation, "as serious new negotiations have to start to bring freedom and lasting peace for all marginalized people in Sudan."

He also noted the humanitarian crisis caused by the violence and the urgent need for food, medicine and aid to reach the tens of thousands of displaced civilians in South Kordofan.

"I hope that the sources of the evidence, the eyewitnesses, will be protected, and the evidence of mass graves preserved and fully investigated to seek justice for the slaughter of an untold number of civilians," he said. "At this time, I call all marginalized people to unite for peace and reconciliation, to stop this state-sponsored ethnic cleansing campaign, and to show the strength and unity that comes from a respect for our diversity."

Jonathan Hutson, director of communications for the Enough Project, said that Senator John Kerry will have Elnail’s statement read into the congressional record on July 14.

Most peaceful regions of the new Republic of South Sudan enjoyed a weekend of celebrations July 9 to10 to mark their independence from the Islamic north following several decades of civil wars that have decimated the oil-rich south.
President Barack Obama on July 9 formally recognized South Sudan as an independent and sovereign nation and called on all Sudanese to honor the Comprehensive Peace Agreement (CPA), a deal signed in January 2005 that brought an end to those civil wars. Almost 99 per cent of southerners voted to secede from the north in a January 2011 referendum that had been called for in the CPA.

Yet instability along the north-south border–particularly in Abyei, South Kordofan and the Nuba Mountains–is threatening to destabilize the peace process.
The U.S.-based Episcopal Church, which continues its long-standing commitment to partnership and advocacy with the ECS, has observed a season of prayer for Sudan since September 2010.

Parkins, from AFRECS, is joining Bishop Geralyn Wolf of the Diocese of Rhode Island in Washington, D.C., on July 14 to press the U.S. government on its role in ensuring lasting peace in Sudan. Wolf has been invited to lead the U.S. Senate in prayer during its July 14 session.

The Diocese of Rhode Island entered into a companion relationship with the Sudanese Diocese of Ezo in October 2008.