The two existing primates of the Anglican Church of Aotearoa, New Zealand and Polynesia (ANZP) have announced that the province’s third primate will be Bishop Don Tamihere, currently bishop of Tairawhiti. The Church of ANZP is unique in the Anglican Communion in having three primates of the whole province, but with special responsibility for the three Tikangas, or geographical and cultural streams: Polynesia, Maori and Pākehā (people of European descent).

Tamihere will succeed the late Archbishop Brown Turei, who died in January 2017 at age 92, just two months ahead of his planned retirement.

As part of the planning for Turei’s retirement, Tamihere was nominated as bishop of Tairawhiti—or Te Pihopa o Te Tai Rawhiti—in October 2016. The diocese serves the tribal district on the eastern seaboard of New Zealand’s North Island. He was consecrated and installed in March 2017.

In September, he was unanimously nominated for the post of archbishop by the three houses of an electoral college held during Te Runanganui—the biennial synod of Te Pihopatanga, the Maori Tikanga of the church in ANZP. That nomination has now been ratified by the province’s wider House of Bishops, and approved by a ballot of members of the ANZP General Synod.

In his new role, the archbishop-elect will become Pihopa o Aotearoa—leader of the Maori Anglican Church. At age 45, he will be the youngest primate in the Anglican Communion. He will serve alongside Archbishop Philip Richardson, bishop of Waikato and Taranaki, and senior bishop of the Pākehā Tikanga; and Archbishop Winston Halapua, bishop of Polynesia.

“We rejoice with the people of Te Pihopatanga o Aotearoa and look forward to sharing the primacy of our church with Bishop Don,” the two serving archbishops said.

The archbishop-elect said that he views the Maori church as “laden with great potential.”

Speaking to Anglican Taonga, he said: “All of us who love the Pihopatanga want it to fulfil that potential—to become the thing that our ancestors dreamed it would be.

“I’ve honestly felt, all through these last few months, that people are just waiting for that opportunity to move into a new future. There’s lots of excitement about the possibilities, lots of renewed energy. It’s a new season, and we need to step into it—and for me, the key is: we move together.”

He described his confidence in what lies ahead: “For me, it’s all captured in the phrase: ‘Ko te amorangi ki mua, ko te hapai o ki muri’—‘Put God first, and everything else will fall into place.’

“The biblical underpinning for that is Matthew 6:33: ‘Seek ye first the kingdom of God, and all these things will be added unto you.’ God has put a mustard seed of faith within us. And if you put God first, there’s no limit to what you will grow and become.” 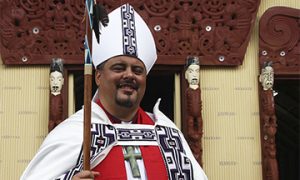 Tamihere was born in Gisborne in 1972 and grew up on the coast. He obtained a master’s degree in theology at the College of St John the Evangelist in Auckland, before being ordained as a deacon in March 2003 and as a priest in December 2004.

He described the six months between his nomination and today’s announcement of his election as “a long journey,” adding: “It was a very thorough process…and in many ways, the process has proven itself. The way the sanctioning process has concluded can give us all great confidence that the call of God that we perceived, and discerned, and celebrated at the electoral college, has been thoroughly proven.”

Tamihere is married to Kisa, and they have three children: Tiana, 22; Danielle, 19; and Ethan, 16. The family share their life with their 18-year-old nephew Toka.

Arrangements for Tamihere’s installation will be announced shortly by the Anglican Church of ANZP.

This article draws heavily on a longer report from Anglican Taonga, the communications arm of the Anglican Church in Aotearoa, New Zealand and Polynesia.