Home » New Chaplain General a man with a plan

New Chaplain General a man with a plan 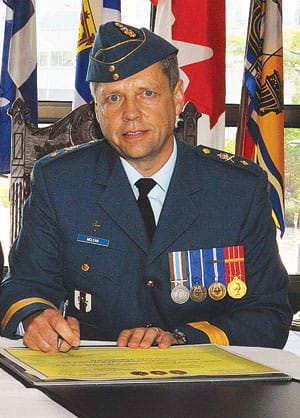 Support from the Anglican Church of Canada has been tremendous, says McLean.

Brigadier-General Karl McLean is a man with a plan. An Anglican priest appointed in September to the top job of Chaplain General to the Canadian Forces, McLean’s mission is to put into action a strategic plan that will better prepare the military chaplaincy to care for troops, families and the chaplains who serve them. Crafted with input from chaplains across the country, the strategic plan will also focus on helping chaplains to be more effective in serving the needs of people of different faiths.

McLean has worked in the chaplaincy headquarters for the past nine years. He says the goal has always been to provide members of the Canadian Forces and their families with spiritual and religious support. Now, with 3,000 troops deployed to Afghanistan, the challenge is greater than it has been since the Korean War. Having the support of the Anglican Church of Canada has been “tremendous,” says McLean. “That’s very meaningful to me.”

Today’s military chaplains are filling a tall order that goes far beyond the rigours of basic training. “Our chaplains need to be capable of going out and being present with the troops, going from place to place, staying with the troops, ministering to them, counselling them, providing worship services, praying with them,” explains McLean, whose son is serving in Afghanistan.

On the home front, military chaplains must also minister to the needs of troops and their families. “We need to provide quality religious programs and worship from a whole variety of traditions,” says McLean.

Care for the chaplains is a high priority. Recruiting the right balance of chaplains from different faith communities is also a significant piece of the work, says McLean. The chaplaincy currently has two full-time Muslim chaplains and three Jewish chaplains. A plan to create a network of aboriginal elders to help care for the spiritual needs of aboriginal members is also in the works. While all the chaplains minister to people of different faiths, having a balanced representation of the faith groups means that they can move around and offer a variety of services, he says.

The plan also emphasizes advanced training and education. “I want to develop our specialties in spiritual direction for the troops,” says McLean. “Especially for people suffering the effects of stress in an extreme way, we’ve learned that chaplains being involved and providing spiritual direction has aided tremendously in the healing process.”