From the standpoint of the Church of England’s intellectual heritage, Justin Welby’s new archiepiscopy is off to a very positive start.

A large cache of valuable historical books has been returned to the venerable Lambeth Palace Library, more than three decades after their theft by a former library associate.

According to BBC History magazine, the now-deceased employee confessed to the crime and the whereabouts of the books in a sealed letter sent to the library by his lawyer soon after his death in 2011. No further details about the mystery perpetrator are being released-perhaps to encourage other book stealers to imitate the repentant thief of Lambeth.

Searching the attic of the man’s modest London house, library staff found box after box of volumes-about 1,000 in all, comprising 1,400 individual publications. Their stolen index cards were stored in nearby drawers. Staff had known for decades that many of the library’s works were missing but understandably assumed they had fallen casualty to a 1941 incendiary bomb that hit Lambeth Palace’s Great Hall, where many early volumes were kept. The library, established in 1610, lost an estimated 10,000 books in that strike.

In 1975, librarians noticed empty spaces on shelves that had housed important works known to have survived the bomb, and empty spaces in the catalogues where their index cards should have been. Some of the collection’s most precious books-16th- and 17th-century volumes with maps dating from the great age of exploration of mariners such as Martin Frobisher-had disappeared. 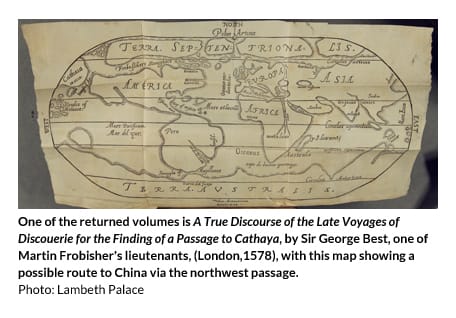 Many of the books came from the collections of three 17th- century Archbishops of Canterbury: Richard Bancroft, George Abbot and John Whitgift, the last a trusted adviser to Queen Elizabeth I. They included an early edition of Shakespeare’s Henry IV, Part Two, as well as Theodor de Bry’s America, a 10-volume account of early expeditions to the New World, and illustrated medical texts such as Jacques Guillemeau’s The Frenche Chirurgerye.

According to James P. Carley, a retired distinguished research professor from Toronto’s York University, the heist also removed books by Daniel Defoe of Robinson Crusoe fame, and contemporary political tracts such as A Defence of the Honorable Sentence and Execution of the Queene of Scots, published days after Mary’s beheading in 1587. Carley, who first became interested in the Lambeth Library when doing research there, chronicled the history of the stolen collection in the April 13 issue of the UK magazine The Spectator.

Some items are still missing, says Carley, including the magnificently illustrated Mariners Mirror with its 45 engraved maps of Europe’s maritime coasts.

Despite alerts to booksellers in Britain and around the world, not one of the missing books had ever turned up, even though it became clear the thief had intended to sell them.

Now in the process of restoring the books, library conservationists found that the thief had excised or chemically removed identifying marks. “He cut out the archbishops’ coats of arms from the armorial leather bindings, and removed ownership stamps and library markings showing which case, shelf and spot each volume occupied,” says Carley, who is an associate fellow at Toronto’s Pontifical Institute of Medieval Studies and author of The Books of King Henry VIII and His Wives. “The books themselves were in good condition-they were not covered in mould-but some had been taken apart to remove the maps,” says Carly, who hopes to help organize an exhibition of the restored books for 2015. 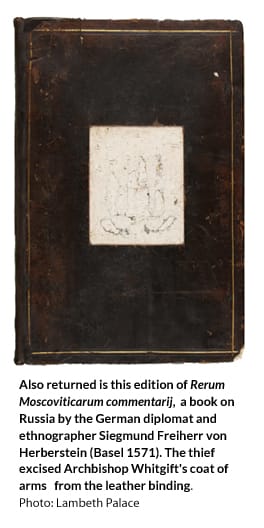 “We’re about 10 per cent of the way through the restoration program,” says Declan Kelly, director of libraries, archives and information technology for the national church institutions of the Church of England. “While the restoration will be challenging-for example, where a coat of arms was removed from a leather binding-our expert conservation staff are doing all they can to restore the books.” In addition to that, the staff is creating fresh coats of arms in matching leather and placing them into the gaps created by the removal of the originals.

“We are definitely giving some thought to an exhibition, which might be either physical or virtual, but at the moment don’t have definite plans,” Kelly adds.