Home » Is wearing your Christian message a good thing?

Is wearing your Christian message a good thing? 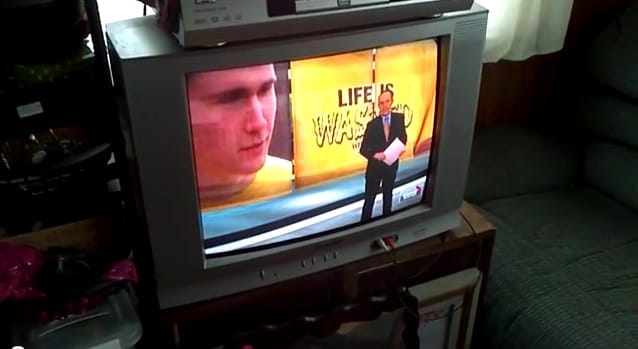 William Swinimer’s church has posted the TV stories about his suspension on YouTube.

Christians and non-Christians alike are weighing in on whether or not Nova Scotia high school student, William Swinimer, should have been suspended for wearing a T-shirt with the slogan “Life is Wasted without Jesus.”

Swinimer, a Grade 12 student at Forest Heights Community School in Chester Basin, Lunenberg County, was suspended for five days and is due to return to class on Monday, May 7. He has vowed to continue wearing the T-shirt, saying that he is simply exercising his rights to freedom of speech and freedom of religion.

At press time, Swinimer along with his church pastors, was meeting with South Shore Regional School board officials to try and arrive at a possible compromise. A devout Christian, Swinimer is a member of the Jesus the Good Shepherd Church in Bridgewater, N.S.

Board superintendent Nancy Pynch-Worthylake said the suspension was prompted by complaints from students and teachers who found the T-shirt’s message offensive. "We do ask that students express their views in a way that would not be interpreted as a criticism…[of others’ beliefs]," Pynch-Worthylake told CTV-Atlantic.

Reached for comment, Sue Moxley, bishop of the Anglican diocese of Nova Scotia and Prince Edward Island, said that by suspending Swinimer, “The school missed an opportunity for teaching and learning and building respect among all involved.”

Phil Colvin, youth coordinator for the Anglican diocese of New Westminster said he finds the school’s reaction to the T-shirt "interesting…when there are many clothes students regularly choose to wear which might cause offence to one or more people." He cited sports shirts and clothes with the label of a corporation involved in sweat shops or labour disputes.

"Wearing an item of clothing does not mean that you live out any particular
set of beliefs or ideals: wearing a ‘Life is Wasted without Jesus’ shirt
makes you no more an evangelist than a sporting a Playboy logo makes you
promiscuous," said Colvin. "What they both do, however, is to invite a response."

Comment boards of mainstream newspapers as well as Twitter have been flooded with reactions to Swinimer’s suspension. To date, the CBC has received 2,016 comments on its story and National Post, 702.

“Is he putting a gun to people’s heads and telling them to ‘accept Jesus as their Lord and Saviour?’ “wrote Rajiv50 at the Post’s comment board. “The Charter of Rights and Freedoms gives people the right to freely propagate their religious beliefs without fear of reprisals.”

Another Post reader, Snollygoster, wrote: “The problem, for me, with religious people is that they get so righteous and full of themselves that they think they have a duty to impose their beliefs on others. Look at the missionaries that were sent to ‘convert the heathens’ over the centuries. The more religious you are the more high and mighty you seem to get. Let the boy have his beliefs but he has no right to try to impose them on others–which is what his T-shirt is doing.”

On Twitter, the Center for Inquiry (CFI), a group composed mainly of atheists and agnostics, defend Swinimer, saying “This shirt causes no harm and is [a] perfectly acceptable contribution to the marketplace of ideas.”

The Anglican Journal asks you to share your thoughts and feelings: Should William Swinimer have been suspended for his “Life is wasted without Jesus” T-shirt? Should messages on T-shirts be banned in schools?