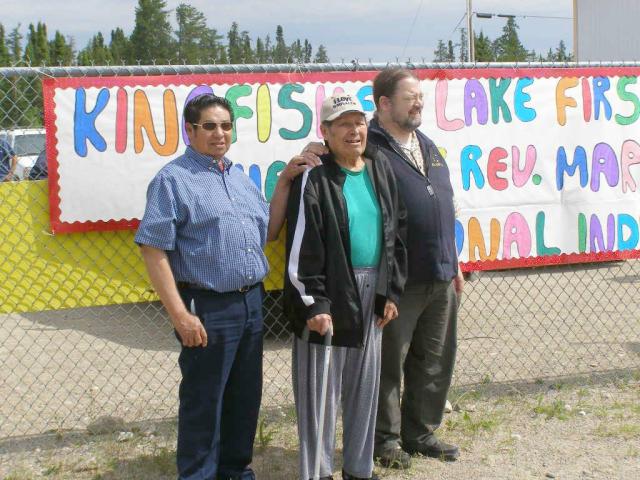 Archdeacon William Winter, an Anglican priest and highly respected elder who pioneered a program for training indigenous people for ministry in Canada, died on March 31. He was 89.

Archdeacon Winter died in Kingfisher Lake, Ont., where the community-based school specializing in Indigenous Anglican Theology that he founded and which bears his name, Dr. William Winter School of Ministry, is located. It is also where he was valued as a visionary spiritual and political leader.

“He held on to so many of the dreams that have animated indigenous ministries for a long time. His vision, his dreams, were so in advance, we’re really still trying to catch up with him,” said National Indigenous Anglican Bishop Mark MacDonald in an interview with the Anglican Journal.

“All of us will miss seeing him and receiving his encouragement,” said Bishop MacDonald, whose first act after his appointment in 2007 was to visit Archdeacon Winter and his community. “On the other hand, it’s a moment full of Christian hope. Hope not just for his life in the next world and our rejoining him…But also hope that what he started which at one time sounded crazy, so wild and out there, what he started is now… what the whole church has agreed is a good idea.”

At its General Synod in 2010, the Anglican Church of Canada approved the introduction of a new canon (church law) that firmly establishes a self-determining national indigenous ministry within the church. It was a dream and vision that Archdeacon Winter had nurtured for a long time, said Bishop MacDonald.

Another dream that came to fruition was the election of the first bishop for an indigenous area mission in the diocese of Keewatin’s northern Ontario region. The bishop, Lydia Mamakwa, who he had encouraged to become a non-stipendiary priest, is his granddaughter. “That was one of the crowning moments of his life,” said Bishop MacDonald.

The primate of the Anglican Church of Canada, Archbishop Fred Hiltz, called Archdeacon Winter “one of the great elders” in the aboriginal community and said he was “much-beloved.” Archbishop Hiltz and Bishop MacDonald will attend Archdeacon Winter’s funeral scheduled on Monday, April 4.

Archdeacon Sidney Black, co-chair of the Anglican Council of Indigenous Peoples (ACIP), described Archdeacon Winter as a “friendly, caring, compassionate man” who was a “truly a role model for the church.”

Bishop MacDonald concurred. “He was well-loved because he was lovable; he was a very courageous, and one could say, resolute person,” he said. “He treated everyone with great compassion and generosity. One of the things you noticed about him was that everybody gravitated to him.”

The first aboriginal priest to become archdeacon in northern Ontario, Archdeacon Winter preferred to work quietly and wasn’t one to “take the stage front and center,” he added.

Bishop MacDonald explained why, despite his stature and contribution, not much has been written about Archdeacon Winter: “He was almost totally oriented towards the world that he lived in. He saw the future of [indigenous people] in God, in Scripture, in learning, but he didn’t see [their] future in elite institutions far away. That’s why none of them have really taken notice in him.”

Archdeacon Winter’s influence goes beyond northern Ontario. The school, which he founded in 2003 in the diocese of Keewatin and in association with The College of Emmanuel and St. Chad in Saskatoon, has trained many indigenous clergy, including Bishop Mamakwa.

His death anniversary will be commemorated with prayers and thanksgiving by indigenous Anglicans each year, said Bishop MacDonald.

The diocese of Keewatin announced that when he died, Archdeacon Winter was surrounded by his family, community members, elders, diocesan bishop David Ashdown, Bishop Mamakwa and clergy.