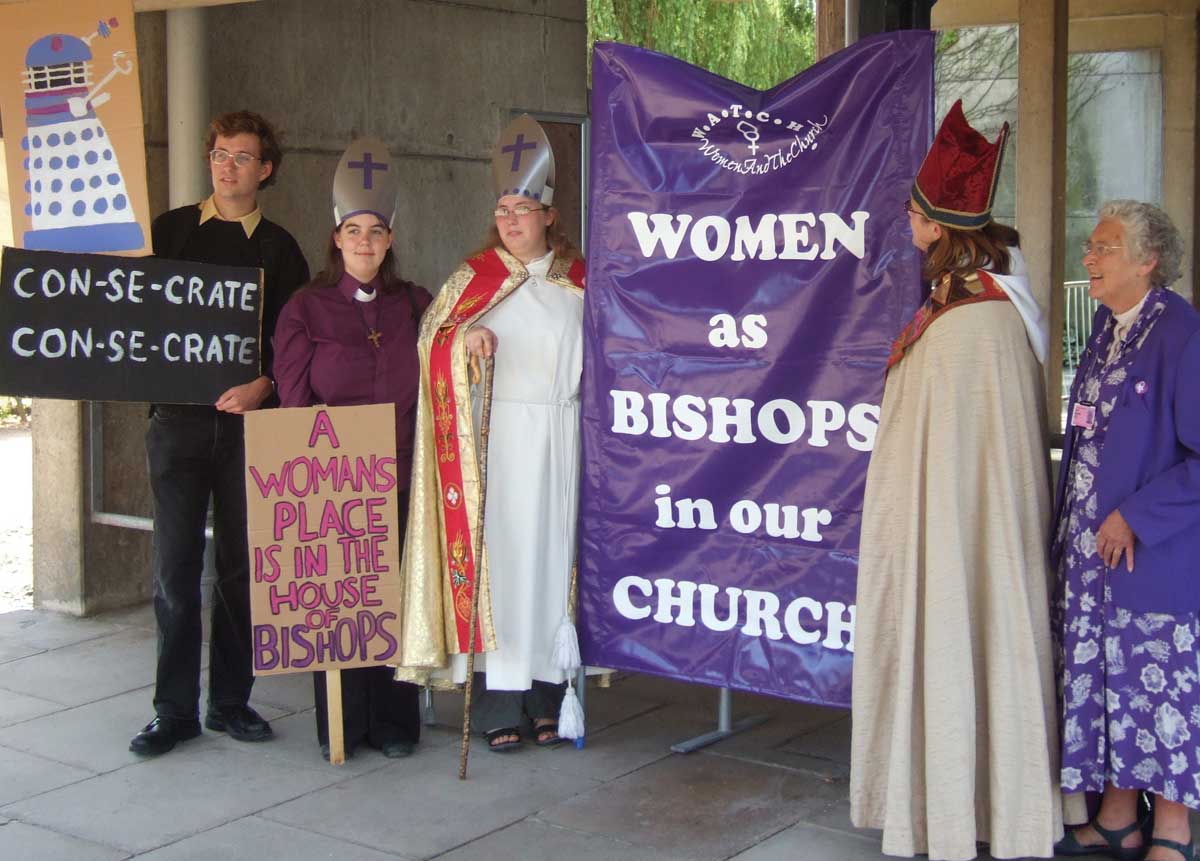 Protestors in favor of women bishops gathered in July 2006 on the campus of York University before the debate began on a motion that addressed the process of ordaining women to the episcopate. ENS Photo/Matthew Davies

The Church of England’s General Synod has rejected a bid to provide greater concessions for those opposed to women bishops. A final vote on the legislation that will enable women to become bishops is expected to come before synod in July.

The Manchester Diocesan Synod Motion, introduced in September 2011 and backed by the archbishops of Canterbury and York, would have supported amending a draft measure to enable two bishops to exercise episcopal functions within the same jurisdiction by way of “co-ordinating” their ministries.

The same amendment was rejected 18 months earlier when in July 2010 General Synod backed the currently unaltered measure that paves the way for women to become bishops, a setback for traditionalists who had hoped for more robust provisions for those in opposition. Some supporters of women bishops feared the Manchester Motion would force women bishops to accept limitations on their authority.

During the past 18 months the legislation supporting women bishops has been given the nod by 42 of the 44 diocesan synods throughout England, but it now requires a two-thirds majority in each of the three houses of General Synod – bishops, clergy and laity – for it to be adopted. Before the legislation comes to synod for final approval, likely when it next meets in July, the House of Bishops will have one last chance in May to tweak the text of the draft measure.

The text of the Manchester Motion was entirely replaced by the text of an amendment that calls for the women bishops measure to return to synod “substantially unamended,” meaning a woman diocesan bishop would not be obligated to cede any of her episcopal authority to a male alternative.

The Rev. Canon Clare Edwards of the Diocese of Canterbury said during a Feb. 8 synod debate that the Manchester motion “would fundamentally change the episcopacy creating a barrier between those on either side. Our Christian identity needs to be in being equally loved sons and daughters of God … I believe we will have nothing to say to our world if we resort to legislation to coexist.”

The Rev. Canon Kathryn Fitzsimons, from the Diocese of Ripon and Leeds, reminded synod of the Feb. 7 address from Sally Keeble, director of the Anglican Alliance, in which they heard about the value of empowering women throughout the Anglican Communion. “Let’s not let our statement of public policy let down women throughout the communion,” she said, urging them to reject the Manchester motion.

Motions identical to the one proposed by Manchester were passed by four other diocesan synods.

The Diocese of Wakefield supported the Manchester motion “even though a majority are in support of women bishops,” said the Rev. Paul Cartwright. “I think this is a lesson to learn. Today’s business could be a make or break for the Church of England. We need to ensure that we care for those who do not support women bishops … We need to work for a win-win situation and one way we can do this is to support the Manchester motion in tact and unchanged.”

Archbishop of York John Sentamu reaffirmed Archbishop of Canterbury Rowan Williams’ earlier plea that “all desire to proceed in a way that would maintain the highest degree of communion,” and that the Manchester motion would provide an opportunity to accomplish that goal.

Bishop Michael Perham of Gloucester, who received the loudest and longest applause throughout the three-hour debate, disagreed. He explained that the current draft measure unamended already represents “a huge sacrifice by the supporters of women bishops. The draft legislation is a huge compromise. It is the middle way … The last thing we want is for the legislation to go down at the last moment. Supporters of women in the episcopate won’t be able to vote for the [amended] legislation. Manchester ties everyone’s hands unhelpfully… and it is not the way forward.”

Christina Rees, a lay member from St. Albans and former chair of women-bishop advocacy group Women and the Church, or WATCH, said that passing the Manchester motion amendment would send the message that “we are a church that has said yes to women bishops, but in law they are not quite the same as their male counterparts. At a stroke passing this … motion [creates] a two-tier episcopate.”

Anne Foreman, a lay member from the Diocese of Exeter, also urged synod to reject the motion because it would further delay the appointment of women bishops, restrict their role and authority “and it will change what the dioceses have voted for.”

But Emma Forward, a lay member also from the Diocese of Exeter, described herself as “a young Anglo-Catholic who cannot in conscience accept women bishops … We’re relying on this amendment to pass” she said, describing it as “our best chance to have a future in the Church of England.”

A measure is a piece of legislation that, once passed by the General Synod, requires approval by the U.K. Parliament. Parliamentary approval is necessary because the measure effectively changes English law as the Church of England is an officially established Christian church with Queen Elizabeth II as its supreme governor. Assuming all stages of the legislative process proceed without delay, the first woman bishop could not be consecrated in England until at least 2014.

According to the Church of England’s constitution, only the House of Bishops has the authority to alter any measure because of the implications it has on English law. Any debate in the General Synod, therefore, is simply advisory.

Only if the legislation is “substantially” amended, would it need to be referred back to the dioceses for approval, thus delaying the process by a further 12-18 months. The decision on what determines a “substantial” amendment, falls to a committee of six people – appropriately named the “Group of Six” – made up of the presidents and prolocutors of the Convocations of Canterbury and York, and the chair and vice chair of the House of Laity.

History of women’s ordained ministry The General Synod began its steady course toward allowing women in the episcopate when in July 2005 it passed a motion to remove the legal obstacles to ordaining women bishops.

In July 2006, synod called for the practical and legislative arrangements of admitting women to the episcopate to be explored. It also called for the formation of a legislative drafting group to prepare a draft measure and amending canon necessary to remove the legal obstacles.

At its July 2008 group of sessions, synod agreed that it was the “wish of its majority … for women to be admitted to the episcopate” and affirmed that “special arrangements be available, within the existing structures of the Church of England, for those who as a matter of theological conviction will not be able to receive the ministry of women as bishops or priests.”

General Synod voted in February 2009 to send a draft measure on women bishops to a revision committee so it could rework the legislation.

The revision committee met 16 times beginning in May 2009 and considered 114 submissions from synod members, and a further 183 submissions from others. In May 2010, the committee published its 142-page report, which offered a detailed analysis of the draft legislation in time for the July 2010 synod debate and vote.

The long path towards accepting women’s ordained ministry in the Anglican Communion began in 1920 when the Lambeth Conference called (via Resolutions 47-52) for the diaconate of women to be restored “formally and canonically,” adding that it should be recognized throughout the communion.

The first woman priest in the communion, Li Tim-Oi, was ordained in Hong Kong in 1944. Due to outside pressure she resigned her license, but not her holy orders, following World War II. In 1971, the Rev. Jane Hwang and the Rev. Joyce Bennett were ordained priests in the Diocese of Hong Kong, though their ministries were not recognized in many parts of the Anglican Communion.

In 1974, there was an “irregular” ordination of 11 women in the U.S.-based Episcopal Church, which officially authorized women’s priestly ordination two years later.

Bishop Barbara Harris, now retired suffragan of Massachusetts, was elected in 1988 and became the Anglican Communion’s first woman bishop after her consecration and ordination in 1989.

The Rt. Rev. Penelope Jamieson made history in 1989 when she was elected as bishop of the Diocese of Dunedin, New Zealand, and became the first woman to serve as a diocesan bishop in the Anglican Communion.

The Rt. Rev. Mary Adelia McLeod, who was ordained a priest in 1980, was consecrated in 1993 as bishop of the Diocese of Vermont, becoming the first woman diocesan bishop in the U.S.-based Episcopal Church. She retired in 2001.

The Rt. Rev. Canon Nerva Cot Aguilera became the first woman Anglican bishop in Latin America when she was consecrated bishop suffragan of the Episcopal Church of Cuba in June 2007.

The Church of England opened the priesthood to women in November 1992, five years after women were first ordained to the diaconate. More than 5,000 women have been ordained as priests in England since 1994 and today they represent nearly 40 percent of all clergy.

The General Synod is the national assembly of the Church of England which came into being in 1970 replacing an earlier body known as the Church Assembly. It continues a tradition of synodical government which, in England, has its origins in the medieval period.

– Matthew Davies is editor/reporter for the Episcopal News Service.