Home » I prayed to God for a mission’

I prayed to God for a mission’ 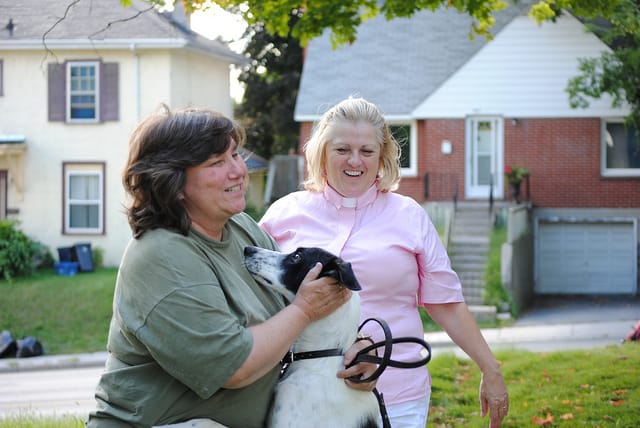 Surrounded by the beautiful Kawartha Lakes, a popular destination for tourists, Peterborough, Ont., seems an unlikely hometown for people struggling to survive.

And, indeed, most of the poverty is invisible, says the Rev. Cathy Stone, deacon of St. Barnabas Anglican Church in downtown Peterborough. “People are couch-surfing or they’re living in cottages that do not have running water or proper insulation.”

Domestic violence, even in idealized rural areas, is a big issue, as Stone discovered when she and her husband, Ron, moved to Peterborough from Toronto in the 1990s. They had given up their executive recruitment business, and Stone, who was not yet ordained, got involved in community work with the Ontario Provincial Police.

“I started to realize that there was a lot missing in my life from a spiritual sense. Life is not about making money,” says Stone. Baptized and married in the Anglican Church, she started attending St. Matthew/St. Aidan in Buckhorn, a cottage-country town near. “I actually prayed to God for a mission, something he wanted me to do.”

The answer came in 2000 through a YMCA initiative that provided funding to groups working to raise awareness about domestic violence in rural communities. Stone and others in the congregation decided to build an emergency shelter in the church. With an additional grant from Faithworks, an outreach ministry of the diocese of Toronto, and additional funds from St. Matthew/St. Aidan, a shelter was built in the church basement. The group formed the Rural Outreach Committee (ROC) to run the emergency shelter, and Stone became its chair.

No longer located in the church basement, the ROC shelter continues to provide emergency housing for women and children in need “regardless of race, religion, social/economic situation, political views, sexual orientation or preference,” says Stone. “Violence against women knows no geographical or cultural boundaries and it affects all women regardless of their income level,” Stone told an Anglican Church Women (ACW) annual meeting in May 2009. “The numbers are staggering. We know that 90,000 to 100,000 [Canadian] women and children seek refuge in shelters each year.”

Poverty, she said, “adds another dimension to the pain and suffering experienced as a result of being abused.” It limits the choices of the abused and bars her from access to services and programs that can help. She noted that in 2004, 2.4 million (one in seven) Canadian women lived in poverty compared with 1.9 men.

Stone notes that there was a noticeable spike in the number of calls to the ROC hotline (about 60 to 80 per day) following the 2009 global economic meltdown and it hasn’t gone down yet. In 2008, about one in 10 people in the city and county of Peterborough were living in poverty, according to a report of the Mayor’s Action Committee on Poverty Reduction.

“For low-income women, the constant struggle to make ends meet is extremely stressful, wearing them down emotionally, undermining their confidence and making it more difficult to be healthy and provide a positive environment for their children,” says Stone. They face multiple challenges, which include “navigating a complex and often confusing welfare system, finding and keeping a job, finding adequate housing and childcare and dealing with the stigma and stares associated with being poor.”

Poverty rates are higher among women in rural areas, says Stone. Most suffer from isolation. Rural women who are poor often find it difficult to leave an abusive relationship or seek counselling. Sometimes they live in situations where elder abuse co-exists alongside spousal violence. “Long-distance calls may be beyond their means; they may not have a car and most live in areas that do not have public transportation,” Stone explains. A big chunk of ROC’s budget goes to transportation, often to get women to court appearances.

Women trapped in rural areas frequently have a strong attachment to the land. A woman may not want to leave her farm animals “for fear that her abuser may hurt them” in retaliation.

Those who do decide to leave end up moving often, living with friends and family, using shelters and living in their cars. It is not uncommon to see a battered car with a woman driving and children in the backseat, says Stone. Others who are unable to provide for their children go back to their abusive partners.

Social-support services are often lacking or nonexistent in rural communities, says Stone. The ROC frequently receives calls for food toward the end of the month.
Without adequate welfare support, affordable housing, childcare and access to jobs that pay a living wage, abused women will be unable to permanently leave violent situations without falling into poverty, adds Stone.

There are also misconceptions that domestic violence only touches poor women, she adds. Lack of self-esteem can play a big role for women of any income level. “They really don’t think that they’re worthy of an individual who could be kind to them or love them,” she says. “It’s a societal issue that has to do with women and men and the way they treat each other. The most important thing women can learn is to educate themselves and learn that they can do it on their own.”

When Stone was ordained a deacon in 2005, she was in a wheelchair, following a car accident that left her in chronic pain. She had to be courageous then and she remains as resolute as ever. “You have to not be afraid to fall,” she says, noting that God was with her when she went through her own “wilderness” after the accident.

And when the ROC needed to find another place to set up its shelter, help came from the least likely place. The county stepped in and offered to lease an old abandoned schoolhouse to the ROC for $1 a year. It provided funds to refurbish the place and convert it into a shelter with two rooms, a finished basement, a kitchen, a laundry room, and a pantry.

Painted in cheerful colours, the shelter doubles as a training space for workshops ranging from self-esteem and empowerment to healthy eating. It is also here that donations of food, clothing and toys are sorted and placed in hampers that are given once a month to ROC clients and to others struggling in the community.

Stone’s big wish is that there will be funds enough for ROC to hire its own staff; needs are great and growing. Both the ROC and Cameron House, where Stone has a weekly ministry bringing church to the residents (see Coming Home, February 2011), deal with women who, in Stone’s words, “have hit rock bottom.”

“My feeling is that when God brings them to us, there’s a reason.”