Home » How to wear a poppy

How to wear a poppy 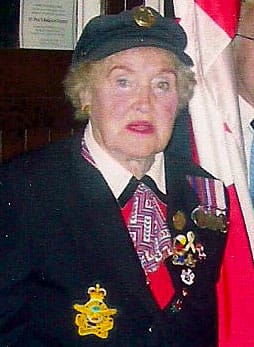 The tone of her letter is delightful. The Thunder Bay, Ont. sticky address label proudly states that she is a Royal Canadian Air Force Airwomen veteran. Beside the label is a red smiley face sticker, and below it, a cut out photograph of a church steeple.

“Thank you for the insert ‘Lest we forget…’ showing artificial poppies,” Dorothy Chambers writes on December 2009, thanking the Anglican Journal for a Remembrance Day photograph published the previous month. “Please notice (and enjoy) the pictures enclosed of how and where the poppy is worn! Always on the left lapel, over your heart, showing total sincerity!”

Another photograph shows her with a group of Anglican veterans “in readiness” for the Sunday service commemorating Remembrance Day. She is the only woman in the group and she is standing with a cane decorated with small Canadian flags.

I write her a letter asking her to tell me about her years at the RCAF.

Dorothy’s next letter, which arrives in January, is heavy and adorned with three images of the Canadian flag. There’s also a photocopied photograph of her on a scooter. She is dressed in red and white, flanked by RCMP parade marshals on Canada Day. “Because I’m a veteran, I do this proudly for Canada!” she writes on the back of the parade photo.

Dorothy writes that she was engaged at 21 to an RCAF air gunner named Jack “who had gone away to England!” She didn’t see him again for three years, then they married in 1947. “We had 48 years of happiness,” she says. Jack died of a stroke in 1993.

Included with her letter is a photocopy of an RCAF certificate. It states that she was in active service from Aug. 30, 1943, and was honourably released and transferred to the reserve on Jan. 3, 1946. There is also a photocopied photograph of young Dorothy, in full uniform, smiling shyly, her big, expressive eyes looking away from the camera. There’s another of her behind the wheel of an RCAF car.

“I enlisted as a stenographer, but they needed military drivers, so that’s what I did,” she writes. She was sent to Guelph, and transferred to a flying training school in St. Hubert, Que.

The call for women to join the Canadian Women’s Auxiliary Air Force (later renamed RCAF WD) came on July 1941. “They Serve That Men May Fly,” was the RCAF WD’s motto. Most had administrative, communications and support jobs.

By the time it was abolished on Dec. 11, 1946, 17,038 women had worn the uniform. “It amounted to 8 per cent of the overall RCAF personnel during WW II,” according to the Juno Beach Centre, a museum and cultural centre in France dedicated to presenting the Canadian war effort during the Second World War.

In 1951, women were allowed to join the RCAF directly. They were accepted as military pilots in 1979, and since 1987, all Air Force jobs, including fighter pilot, are open to women.

For months later Dorothy writes again, sharing her plans to attend two Anglican Church Women events. She admits she “can’t tackle much” since she has osteoarthritis,”which gives me an aching back if I overdo functions.” At 88, Dorothy uses a scooter. “Not driving anymore due to eyesight diminishing-but a walker and cane come to my rescue for easier mobility at functions like attending church,” she writes. “My scooter is parked in the lobby on Sundays and then I use my cane.”

After the war, Dorothy became Fort William, Ont.’s only driving instructor for women. Her students included teenagers, widows and housewives of all ages. Having been drafted to the RCAF’s driver section turned out to be fortuitous.

It wasn’t unusual for women to join the service, writes Dorothy. How did the men react to their presence? “Little said.” The hardest part was getting up early and missing friends, she says.

Coming home after the war, Dorothy says she had to get used to plain clothes again, since “we were always properly dressed in our clean buttons and shoes every day.” Other than this, she doesn’t say much about the experience. I can only surmise it was good because Dorothy is an active veteran; she never misses a Remembrance Day or Canada Day celebration.

Last Canada Day, Thunder Bay’s Chronicle Journal wrote about Dorothy giving out Canadian flags to people in and around the local park. “Chambers had her pride on full display, wearing red and white and the maple leaf wherever she could find room, from her helmet and scooter to her cane, which was covered in maple leaf tape,” it said.

I look at the letters I’ve received from Dorothy, all adorned with maple leaves. She explains that she belongs to the Military Resource Centre, which promotes Canada wide Red Rally Day. Each Sunday, as she enters the 10 a.m. service of her local Anglican church, Dorothy writes ‘Pray for troops” in her prayer request. “Prayers do work,” she adds.

She also advocates for troops by writing letters to the editor of her local newspaper. In one, she counsels a returning soldier frustrated about the challenges of shifting from military to civilian life and points to services that are available to him. “Military life is fulfilling and makes one a strong character to face the challenges of the future,” she writes. “I personally say God bless you, son, and all the best to you and your family as your character grows stronger.” Ω