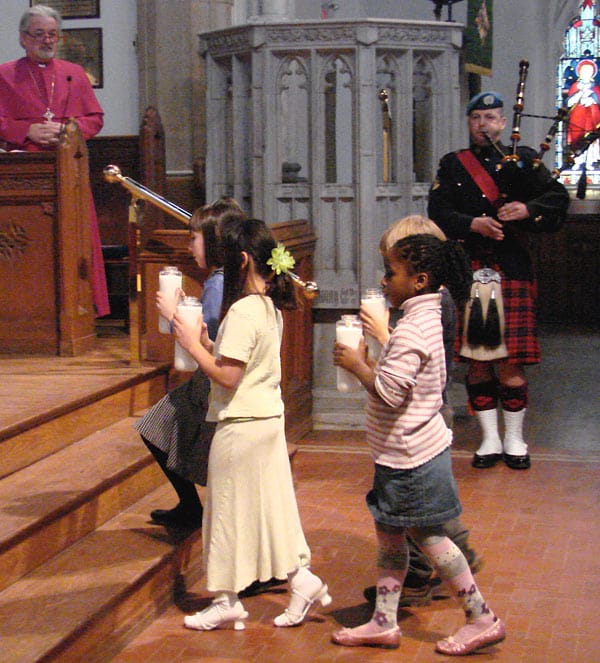 LAMENT AND VIGIL: Watched by Bishop John Chapman, four children carry candles to the chancel at Christ Church Cathedral, Ottawa, as police Staff Sgt. Brad Hamspon plays “Lament of the Flowers” during a special service for Haiti held on Jan. 24.

Anglicans have been quick to respond following the 7.0 earthquake that tore apart the tiny country of Haiti on Jan. 12. In this special report, Marites N. Sison documents the outpouring of support from across Canada as well as the efforts of the Episcopal Church inside Haiti.

A nine-year-old parishioner from Trinity Anglican/Lutheran, Port Alberni, B.C. made hundreds of bookmarks that she sold for $1 each. A Western Newfoundland parish, struggling after the collapse of the cod fishery, organized a benefit concert.

Like the rest of the world, Anglicans in Canada were so moved by the plight of Haitians affected by the devastating Jan. 12 earthquake, that they responded quickly to appeals for donations.

“Give generously,” urged Archbishop Fred Hiltz, primate of the Anglican Church of Canada, a day after the 7.0 earthquake, said to be the most powerful to hit Haiti in 200 years. “The people in Haiti have suffered so much in the past 10 years.” “Hurricane Jeanne ripped through the island in 2004 and in 2008, tropical storms took a huge toll. Now, a new disaster.”

And Canadian Anglicans are giving (see A BIG THANK YOU, at right). At press time, PWRDF had sent an initial $50,000 to Action by Churches Together (ACT) International, a global alliance of church-based agencies working in emergencies worldwide. PWRDF is a member. ACT member agencies responded within hours of the earthquake, providing safe drinking water, food and tents for the hundreds of thousands left homeless. Another $50,000 was sent to the Episcopal diocese of Haiti, confirmed Naba Gurung, PWRDF humanitarian response co-ordinator.

PWRDF is also exploring the possibility of joining forces with other Canadian churches to map out plans for a longer-term rehabilitation effort that will be done in partnership with Haitian NGOs. Such an effort will be similar to the multi-year rehabilitation effort undertaken by the Presbyterian, United, Mennonite and Anglican churches in the aftermath of the Asian tsunami.

From Anglican parishes across Canada, the response has been overwhelming and creative. The Parish of Isle aux Morts-Fox-Roost-Margaree, one of 32 dioceses in Western Newfoundland, organized a benefit concert that featured the gospel music of New Wine, a church music group based in the adjacent Parish of Grand Bay. “Like a lot of communities in Newfoundland and Labrador, this sector of the province is suffering from the collapse of the cod fishery,” said its rector, the Rev. Duncan Granter. Still, parishioners felt compelled to do something.

In Victoria, B.C., the dean of Christ Church Anglican Cathedral, Logan McMenamie, invited citizens and all churches, temples, and mosques to gather for a day of “silence, prayer, or meditation to lift up the people of Haiti.” A benefit concert was held at St. Paul’s Anglican Cathedral in London, Ont., and other similar fundraising events are being organized elsewhere around the country.

The generosity of Canadian Anglicans is nothing new. They have responded in the same way to other major disasters. In 2005, PWRDF received a record-breaking $4.639 million in donations from individuals, parishes and dioceses in response to some of the most devastating disasters in recent memory: the South Asian tsunami, Hurricane Katrina, the Pakistan earthquake, the civil war in the Sudanese province of Darfur, famine in Niger and Hurricane Stan in Central America.

Haiti is no exception. The compelling images of hope and courage in the midst of so much suffering among millions of Haitians–the majority of whom are impoverished to begin with-has struck a chord with Canadian Anglicans.

The Anglican Church of Canada’s long history of partnership in mission with the Episcopal diocese of Haiti has also made Haiti’s tragedy more personal for many Anglicans, particularly those who have made visits to the various ministries in Port-au-Prince and neighbouring Leogane.

Archbishop Hiltz himself noted that Canon Oge Beauvoir, a graduate of Montreal Diocesan College, served the church’s national office as Partnerships’ regional mission co-ordinator for Africa and the Middle East. A Canadian Haitian, he was sent to Haiti in 1991 by the Anglican Church of Canada as one of the last paid overseas personnel. He has been serving as principal of the Seminaire Theologies d’Eglise Episcopal du Haiti (STEEH). Canon Beauvoir and his wife, Serette, survived the earthquake and are helping to supervise relief efforts organized by the diocesan bishop, Jean Zache Duracin.