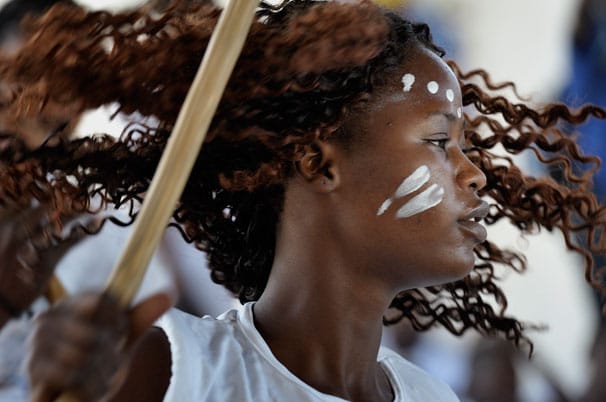 A girl participates in a dance, which is part of a comprehensive psychosocial programme supported by the ACT Alliance in post-earthquake Haiti. Photo: Paul Jeffrey/ACT

A year after a 7.0 magnitude earthquake reduced Port-au-Prince to rubble, leaving more than 200,000 dead and 1.5 million displaced, questions remain about whether or not recovery is possible, and if so, what that would look like.

Today, a million Haitians continue to live in sprawling tent cities. Only five per cent of the 24 million metric tons of debris has been removed, and refugees continue to flock to struggling rural communities. Crowded and unsafe conditions have given rise to spiraling rates of domestic violence, and rape of women and girls and exploitation of children in the sex industry has reached a four-year high, according to Unicef.

Charities have acknowledged that the relief phase of the humanitarian mission to Haiti is far from over. An outbreak of cholera, which killed more than 3,000 people and infected 157,000 others, has hampered progress. So has “a year of indecision” by the Haitian government, and lack of co-ordination among donors as main culprits, according to Oxfam, an aid organization.

The United Nations has fended off criticism about lack of progress, claiming the scale of Haiti’s disaster was “apocalyptic.” Other charities have echoed that sentiment, pointing out some New Orleans residents affected by Hurricane Katrina in 2005 have yet to return to their homes.

Allegations of widespread fraud in last November’s general elections, which led to riots, has made matters worse. Now, anxiety runs high in anticipation of the presidential run-off election, scheduled for Jan. 16.

“…the earthquake has exposed the suffering of the Haitian people,” said Constantine Triantafilou, executive director of the International Orthodox Christian Charities (IOCC). “Much remains to be done to address the long-term needs for permanent housing, clean water and sanitation, and other basic necessities that will help to restore justice, dignity and peace to the people of Haiti.”

Haiti was in trouble before the earthquake struck: Soaring poverty, poor governance, violence, lack of infrastructure and inadequate social services were already a way of life. “The quake seriously undermined what little was there,” Save The Children CEO Charlie MacCormack, told The NonProfit Times, a publication for non-profit management.

Still, some charities report progress. Action by Churches Together (ACT), an alliance of more than 30 church-backed aid organizations, has mobilized more than $100 million and 12 of its member organizations are providing shelter, health and hygiene support, rubble removal, emergency schooling, school reconstruction, and livelihood support.

More than 400,000 people have benefitted, said Genevieve Cyvoct, who co-ordinates ACT’s emergency response. [The Primate’s World Relief Fund or PWRDF, the relief and development arm of the Anglican Church of Canada, is a member of the ACT Alliance.]

Examples include the building of temporary and semi-permanent classrooms at 50 schools by the Lutheran World Federation, Finn Church Aid and Norwegian Church Aid. The Christian Reformed World Relief committee has provided 10,000 people with hygiene and cooking tools, and shelter materials.

“There’s still an ongoing emergency phase in the sense that we still need to distribute water, we still have to take care of latrines, especially now with the cholera outbreak. This is now a new emergency,” said Cyvoct. “But also gradually, we have seen a shift in the response in that some ACT members have already started to rebuild permanent shelters, permanent homes and in some cases, transitional shelters, depending on the land issues.”

Naba Gurung, PWRDF humanitarian relief program co-ordinator, said more than half or $1.3 million of the $2.2 million received in donations from Canadian Anglicans have already been disbursed to its ACT partners and the relief and development agency of the Episcopal diocese of Haiti, which is working in Port-au-Prince and other areas affected by the earthquake.

Of funds disbursed, about $750,000 has gone to ACT partners, and $550,000 to the Episcopal diocese of Haiti and Episcopal Relief and Development (ERD), the aid organization of the Episcopal Church in the U.S..

More than $300,000 of the amount disbursed to the diocese and ERD is being used to build 145 provisional shelters, toilets and bathing enclosures in communities outside Port-au-Prince. The provisional home project aims to “restore a sense of physical and emotional security” to affected families and create 435 construction jobs.

The diocese has also reopened and built temporary schools, offered cash for work programs and other livelihood support to victims. Gurung said the diocese and PWRDF are discussing a meal program for students who attend schools managed by local Anglican parishes. PWRDF has no plans to issue another appeal for Haiti, said Gurung.

Cyvoct acknowledged that “a lot of uncertainties” remain. The level of frustration among Haitians is high and this is understandable, she said. “They feel that their voice hasn’t been taken into account, they feel that…their needs have not always been answered correctly.”

The Haitian government needs to show more leadership, “and take decisions that reflect the priority needs of the Haitian population,” said Oxfam in a followup report. Infrastructure projects should put people to work and build skills, land must be allocated for new homes, support must be given for people to return home, among others.

The international community “should do more to support these efforts by increasing the capacity and capability of Haitian institutions rather than sidelining them,” said the report. More than half of the $6.1 billion pledged by more than 30 countries has not been donated.

In the long-term, however, Cyvoct said the major issue that needs to be addressed is “the vulnerability [Haitian] people experience” as a result of poverty, huge disparities between rich and poor, and poor governance.