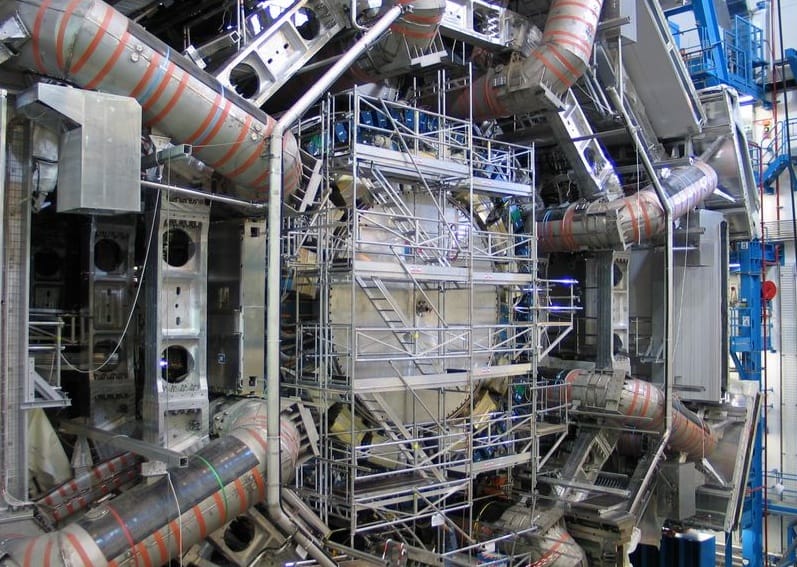 Geneva’s Large Hadron Colllider is closing in on the particle that creates mass in the universe. Photo: CERN

Scientists at the 17-mile-long Large Hadron Collider in Geneva are homing in on the most sought-after particle in physics, the Higgs boson. The so-called God particle is considered the subatomic prime mover behind mass and the means by which things acquire matter.

Finding the hidden boson, a cosmic building block posited in the mid-1960s by English physicist Peter Higgs, would be a huge advance in understanding how fundamental particles interact. The Higgs is purported to be linked to a field of the same name that imparts mass to elemental particles. It is the last missing component in the “Standard Model,” the working blueprint for the interaction of forces and particles in the universe.

At a symposium on Dec. 13, physicists at CERN, the European Organization for Nuclear Research announced that after sifting through the debris from trillions of proton collisions, they had significantly narrowed the range in which the Higgs probably lies. “We have restricted the likely region of mass for the particle,” said Dr. Fabiola Gianotti, a CERN particle physicist. “If we’re lucky, we’ll know more by the end of 2012 or sooner.” The finding came out of two complex experiments.

While militant atheists such as Stephen Hawking and Christopher Hitchens will doubtless rejoice at cornering this physical prime mover, people of faith will doubtless ask,” “Who’s behind the Higgs particle?”