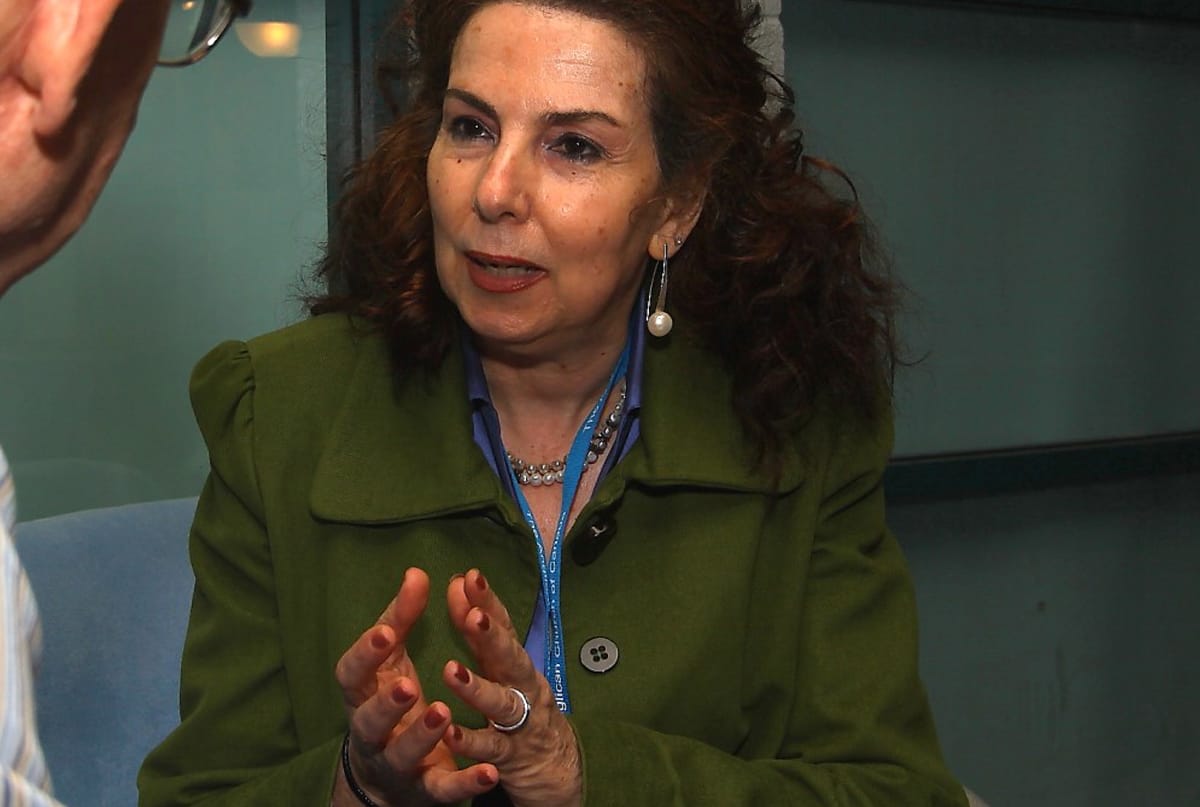 Shafeeqa Dawani’s mission is to empower the women of Jerusalem and the Middle East to work together for peace.

Three years ago, her husband, Suheil, became the Anglican bishop of a diocese that encompasses 27 parishes in five countries-Israel, Palestine, Lebanon, Syria, Jordan-and supports hospitals, clinics, schools, and other institutions. Shafeeqa saw an opportunity as the bishop’s wife.

“I decided that in my position I could do wonders. I believe it is my responsibility and duty to reveal our women to the outside world.”

In an interview, the lively and attractive native of Palestine-whose parents lost nearly everything in 1948-said her work with hundreds of once shy and withdrawn Palestinian women, young and old, is showing signs of much success.

There are female leaders in Arab culture but for most women, their sphere of influence is the home. Otherwise, they defer to men. It is often an isolated and lonely life.

Through a series of conferences and workshops, women, including the wives of many of her husband’s priests, have taken on a much wider role.

“They are active. They have beat their shyness. And there is encouragement-in every step they take they are encouraged by their husbands and by other women,” she said.

“They are finding more creative ways of dealing with their children also, and they are learning to respect elderly women and elderly people. Also they are helping the priests-their spirit towards the church and the priests has become much more positive.”

Dawani, 55, says that she was once a shy, retiring university student studying for a psychology degree. Her Christian family had re-established itself in Ramallah, part of what is now the West Bank. But she wasn’t all that religious.

“You want me to be frank? I wasn’t a churchgoer. But one day my aunt, an elderly lady, encouraged me to come to church one time. She said there was a very handsome young man in the church. She said, ‘Come and meet him.’ So I went.”

“After I met him, I never left church,” she said, laughing. The young man was Suheil Dawani, destined for the priesthood eventually becoming bishop of the diocese of Jerusalem.

Still, as a clergy wife, Dawani stayed at home-until her husband was posted for six years to Jerusalem. She was called upon to talk to some of the many visitors, and tell them what the Anglican Church was doing in the Holy City.

“I had to stand up and speak, or I wasn’t ever going to. I decided to beat my shyness.”

Was it hard? “No, just the first time. As a young priest’s wife, I had to swim in the sea and find my way. I followed my husband. I’m proud to say, I sort of imitated him. But now I do it on my own. I am beside him.

“Tradition is culture, it is art. For example when we cook, it’s a traditional role-we show our traditions to the people and our art in cooking to the people.”

She still does a lot of cooking, although since becoming the bishop’s wife she has more help. Her favourite dish is mensaf, a Bedouin dish of lamb and yoghurt served with rice.

The Dawani’s have three daughters, all in their 20s; the middle daughter is married and lives nearby. The elder two are quite traditional, but the youngest is not and she has her mother’s approval to be assertive.

Luban, 20, a university student, “feels she has the right to speak her mind in front of anybody."

If, while walking down the street, either of the other two daughters heard an unpleasant comment from a young man, they were too shy to reply. “This daughter, the third one, isn’t shy. She answers back.”

“When I was young I got mad easily… but I have learned from my husband that I have to accept the other, no matter how his views are different from mine-not to agree, just to accept and respect the other person.

“It’s hard when the person in front of you does not feel with you, and does not accept me as a Palestinian Christian, or that my family once lived in Jaffa.” (Jaffa has been incorporated into Tel Aviv in Israel.)

“Sometimes that person doesn’t know the truth, but a distorted story. I feel sad inside, not mad, sad inside now. And I am learning from my husband, really…”

What has your husband learned from you?

“He’s learning from me to look not only with his eyes but to look with his heart. He had a very soft heart but it didn’t show in the beginning because he was too shy to express it, because in our culture this is more the woman’s role. Now he’s…different.”

Shafeeqa Dawani’s hope now is to expand her work and empower women of other denominations and faiths.

“We are trying to get all the Christian voices together as women, and we are trying to be involved with the Muslim women-involved of course in a decent way with give and take.”

“So I think as we get together, women can be heard not only as Christian women. Even the Jews [can be heard] as the voice of the women of Jerusalem, in order to bring more peace and reconciliation.

“We have always to hope, live in hope. If I do not have hope I cannot give it to others and encourage others to stick to hope and faith and love. We live in hope.”