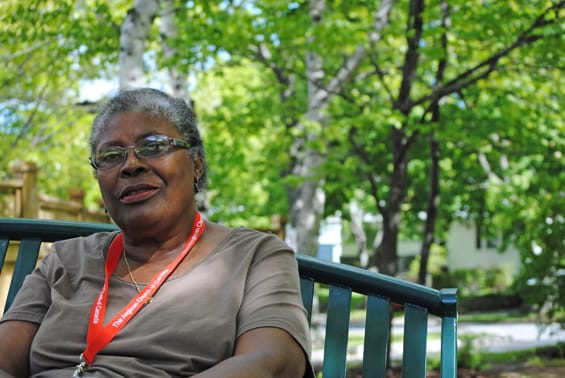 This is Patsy Grant’s first General Synod and she is determined to make every minute count.

Grant has been to the national gathering of other church denominations during her term as national president of the Anglican Church Women (ACW) of Canada. This is the first time she’s attending her own church’s meeting and she is looking forward to it.

One of four lay delegates from the Winnipeg-based diocese of Rupert’s Land, Grant has come prepared. Having been exposed to national gatherings of other churches, she knows that the triennial meeting of the Anglican Church of Canada’s governing body can be mentally and physically taxing. “I know what to expect having been to those conferences; I know how to pace myself,” she says.

Grant has also read all the resolutions that are coming to the floor in the course of the nine-day meeting. “I’ll try to glean whatever I can from this synod and take it back to my diocese. If I could make a contribution, I would, ” she says.

Grant says she would have let her name stand as a delegate many years ago had she not been working full-time as a teacher and as women’s ministry co-ordinator of Rupert’s Land and later, national president of ACW.

A respected educator, community organizer and parishioner from All Saints’ parish in Winnipeg, Grant hopes that at this General Synod, Canadian Anglicans will “get some conclusions to some of the questions that have been floating out there,” especially around the issue of same-sex blessings. Asked what she thought the implications would be if no clear direction emerges around what the church ought to do with the issue that has bedeviled Anglicans in Canada and around the world, she says, “We’ll have more disgruntled people and maybe lose some.”

Official business aside, Grant says she’s looking forward to renewing acquaintances she made during her time with ACW. She also sees General Synod as a crucial moment for putting her faith into action.

Grant recalls that she really grew into her faith and learned a lot as ACW-Rupert’s Land ministry coordinator from 1995 to 2005. “Working with different people from varying backgrounds and different age groupings is not easy,” she explains.

Becoming the first black national president of ACW-Canada (1980 to 1982) was “even more of a challenge,” Grant says, citing some instances of overt racism. “When I went to represent Canada up front and I had to bring greetings, they would be looking all over…because they expected it would be a white person bringing greetings on behalf of Canada… I would just smile,” she says. She recalls an “unfortunate incident” when one church lady refused to shake her hand during a visit to Mississippi.

Those instances have not, however, dampened Grant’s enthusiasm for her faith and her church. “As far back as I can remember, I have always been a member of the Anglican Church,” says Grant. At an early age her grandmother and mother instilled in her that having faith in “a living God” will help her get through life. “I have faith like you won’t believe it,” she says emphatically. Things can still go wrong and she can get frustrated, “but I can quickly turn away and find some solace,” she adds.

One thing that did go wrong: Air Canada put Grant on one flight and her luggage on another. But Grant has faith, even in Air Canada. Instead of fretting, she is calmly waiting for her luggage to arrive.