The recent discovery of one of the two ships from the doomed Franklin expedition has sparked renewed interest in the tragedy, and a small Anglican church in The Pas, Man., has some surprising connections to that history and some remarkable artifacts.

The English explorer Sir John Franklin led two overland expeditions in search of the Northwest Passage through the Arctic in 1819 and again in 1825, both of which brought him to The Pas (or Opasquia, as it was known then). According to information from Sam Waller Museum in the present-day town, Franklin was impressed by the small “island of civilization” in the wilderness, and he and his wife, Lady Jane Franklin, later sent a sundial as a gift to the Church of England Mission at the site, which later became Christ Church.

Franklin’s next attempt to find the Northwest Passage was the ill-fated one in 1845. According to A Historical Sketch of Christ Church, The Pas, written by rector David Greene in 1931, one of the first efforts to find Franklin and his men was led by Sir John Richardson, who had been a comrade of Franklin on some of his first voyages. The Richardson party spent the winter of 1847 to 1848 in the area. It was during a time when the Rev. James Hunter was overseeing the construction of a church for the Devon Mission, as it was then called, and records indicate that carpenters from the Richardson company made some articles of furniture, such as chairs, chests of drawers, the font, communion rail and a reading desk. Greene noted that some people said the pews were made by the Richardson crew as well, but he questioned that notion. (Illustration: A Historical Sketch of Christ Church, The Pas, General Synod Archives) 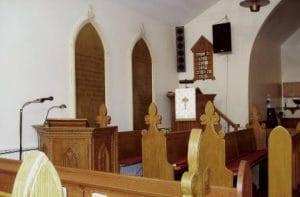 The Rev. Rebecca Graham is now the priest at Christ Church, and her husband, Remi Rheault, has been researching the history of the Devon Mission ahead of its 175th anniversary, which will be celebrated in September 2015. “We are the second oldest mission in Canada, [that was originally] sponsored directly by the diocese of Canterbury,” he explains.

Rheault began his research, he says, while looking into the possibility of restoring four 1836 panels of art hanging in the church that are transliterations using Roman characters to spell Cree words of the Ten Commandments, the Lord’s Prayer and I Corinthians 11:24-26. Along the way, he has made some interesting discoveries. A chest of drawers in which church paraments are stored is stamped 1835, U.K., which leads him to believe that it came from the captain’s quarters of Richardson’s ship. He also says that the church bell and an antique lock that was used on the church doors until recently also came from the ship. (Photo: Remi Rheault)

In his spare time, Rheault has been examining boxes of documents from the mission’s history in the attic of the present church, which was completed in 1896 after the first church burned. He hopes funding can be raised to archive and scan all the documents, some of which are frail. “The history out here is so rich,” he said.