Ex-vice regal ‘at home’ in communion 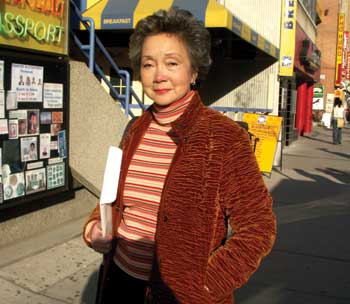 A cradle Anglican, Adrienne Clarkson said not one Canadian young person ever asked about her faith during her visits across Canada as governor general. Churches, said the retired vice regal, &quopthave not adequately explained” the meaning of faith to young people. “We haven’t attracted them by all means possible.”

There were times in Adrienne Clarkson’s life as governor general that people whom she did not know and who were dying would request that she visit them.

“I would always go,” recalled Ms. Clarkson, one crisp day in early November, more than a month after she retired as Canada’s 26th governor general. “I didn’t know if they were religious or not, but I would always go and while I was with them, interiorly pray.”

Such was the Anglican faith that her parents instilled in her as a young child that when Ms. Clarkson became the nation’s second woman and first non-white governor general she said that prayer “was no more important than it’s always been in all my life.”

So important, in fact, that she adopted Anglican church symbols in her coat of arms when she became governor general – around the necks of the tigers (her favourite animals; also the year she was born in the Chinese calendar) that support the shield are two white plates with a red cross on each. The cross and white disc were taken from the badge granted to the Anglican Church of Canada in 1995. She also adopted as a motto at the base of the coat of arms the phrase Verum solum dicatur, verum solum accipiatur, from the collect for the Nativity of John the Baptist, which means, “May only the truth be spoken, may only the truth be heard.”

The statement she wanted to make, she said was, “I am an Anglican and that is a part of my life; that I really feel at home in the Anglican Communion.”

Observers have suggested that Ms. Clarkson’s legacy is that of making the office of governor general visible, relevant and engaged in a way that it had not been in a long time.

For people of faith who struggle in what has become a secular society, it can perhaps be said that one of her enduring contributions has been to put her Christianity and spirituality front and centre.

As Canadians tried to comprehend the brutality of the Sept. 11 attacks in the United States, Ms. Clarkson and her husband, John Ralston Saul, joined Ottawans in hopeful prayers recited by inter-faith leaders from Christian, Jewish, Muslim, First Nations, Hindu and Sikh traditions. She attended the service, head bowed in prayer, as a parishioner; she did not speak but her presence was unmistakably eloquent.

Ms. Clarkson’s visits across Canada were also not complete without a visit to a local Anglican church. “I loved seeing how they were in different places and it was always familiar; it was always very much what I knew and know by heart,” she said.

In an interview with the Anglican Journal at a restaurant in Toronto’s Annex neighbourhood, Ms. Clarkson talked about Anglicanism and its role in her life.

“My roots of faith are nothing extraordinary,” said Ms. Clarkson. “I was brought up by a family that was Anglican and that had been Anglican for five generations. I had an uncle who was an Anglican priest in the Chinese Anglican church in Hong Kong.”

When her parents – William and Ethel Poy – came to Canada when she was three years old, she said the Anglican church became “one of the focal points” of their lives; her mother immersed herself in the activities of the Women’s Auxiliary.

The Anglican church became an important source of comfort for the Poy family, who had come to Canada as refugees using the “special circumstances” clause in the Chinese Immigration Act of 1923, which allowed Chinese into Canada during the Second World War in 1942.

“I always thought of the church as a very big support for us and it was a place that we loved,” she said.

The choice of university for her bachelor of arts and master of arts degrees was decidedly Anglican – the University of Toronto’s Trinity College.

“It was very wonderful because we had beautiful services there and I learned a lot about different kinds of things that Anglicans can do like services of the Compline,” she said. After studying late in the library, she often attended Compline at 10:30 p.m. “It’s a wonderful, wonderful service – a liturgy that is as old as anything could be. Those were the things that gave a rhythm to your life; it was very beautiful.”

It was also at Trinity that she struck a friendship with (and even casually dated) the former primate, Archbishop Michael Peers, who was a divinity student. The two have become lifelong friends – Archbishop Peers’ wife, Dorothy, worked with Ms. Clarkson during her stint as producer, host and writer with CBC television; Archbishop Peers presided at Ms. Clarkson’s wedding to Mr. Saul shortly before she became governor general, he officiated at her installation as governor general and he presided at her mother’s 1988 funeral and her father’s 2002 funeral.

At Trinity she imbibed what she refers to as the “Anglican view of life” which is “tolerant, nuanced and basically intellectual.” Most of the people she has looked up to have Anglican roots: Elizabeth I (“a very clever woman; she knew how to take those hatreds between the Protestants and Catholics and meld them together into something that was the Anglican church), Nobel Peace Prize winner and former primate of South Africa Desmond Tutu and Archbishop Trevor Huddlestone (“people who have fought for social justice are the people that I admire.”)

“I think the way I’ve looked at my fellow citizens and people as human beings comes from my religious faith,” she said. “There’s no question that when you have a belief in God, you believe in other people because that’s what it means, that God is in other people. That’s what it meant for Christ to become a man. So I think the way in which you deal with other people you have that full sense that they are a part of this great creation of which we are a part, and that you’re not better than they.”

She is saddened by the fact that “young people don’t realize what is there that could be offered to them in terms of the real messages of meditation, prayer and all those sort of meaningful things that (they) search for in other cultures.” Not one Canadian youth whom she met during the course of her visits across Canada ever asked her about her faith, she said.

Churches “have not adequately explained” the meaning of faith to young people, she said. “We haven’t attracted them by all means possible.”

“I feel badly about that because I wonder what will happen to all the lovely fabrics of the church,” she added. “On the other hand, I’d rather have a building disappear than the people … I like the paintings and the vestments and the altar frontals; all of that is lovely but if we don’t have to have that and we can’t have that, I’d rather have the people.”

She counted as particularly meaningful her visits to aboriginal communities in the North, among the Inuit, where she said spirituality is “so palpable.”

“There’s such a feeling when you go to a service there that it is just so alive with the spiritual. They usually hold hands at a certain point instead of just a brief, embarrassed, you know, ‘Peace,'” she laughed. “There, people hold hands for a whole bit of liturgy because they use slides and stuff through a whole hymn or a whole part of the service. That really has a lot of meaning. I find our native peoples have enormous spirituality because they have it in their own traditions.”

Ms. Clarkson also waxed ecstatic about Anglican music, which she said is one of the faith’s greatest treasures. “My Catholic friends think it’s absolutely extraordinary to go to a Benedictine convent in deepest Quebec and hear plain chant. But we have plain chant all over the place in the Anglican church in every city,” she said. On any given Sunday in Canada, she said, one can listen in an Anglican church to “music the way it was supposed to be played,” she said, naming Mass by William Byrd, motets by Giovanni Pierluigi da Palestrina and Thomas Tallis. “And they’re not in a concert hall, they’re in the context of a liturgy.”

Ms. Clarkson said that, like many Anglicans, the deep divisions in the Anglican Church of Canada and the Anglican Communion over homosexuality have troubled her. “I so regret it because what I believe in is human beings loving each other and being able to accept each other no matter what they are,” she said. “Romeo Dallaire, who I admire as one of the finest Canadians alive says we are all human beings and no human being is more human than any other. And I think that’s absolutely true.”

She “never asks for things particularly,” when she prays, said Ms. Clarkson. “But I do pray for people if they’re sick and if they have problems and I just ask that they be noticed because often they won’t ask for themselves or they don’t know how.” She tries to read Scripture when she can and has gone (and plans to go again) on a retreat with the Jesuits. “I’m very interested in the whole meditative life and I always have been,” she said. “What I’ve learned in order to get on in the world was to be outward acting and so on. But I really believe that the inward invisible grace is very important.”

Having returned to Toronto, Ms. Clarkson has rejoined her old parish of St. Mary Magdalene (which she attended during her university years and where she married Mr. Saul).

She described St. Mary Magdalene as “a very friendly and warm place,” that holds a lot of meaning for her, resonating perhaps the comfort and solace that her family sought and found during their early years in Canada. “I have found that in my adult life I prefer to go to churches which are very mixed,” she said. “There are a lot of people who are single, alone and you know afterwards when you have coffee downstairs or in the parish hall that for a lot of them it’s the only social contact that they have all week. Their sense of isolation is at least being broken there and that’s why I like those sort of churches … I like parishes where I know people are not only friendly but also you have a feeling that this contact means a lot to them, they’re not just slipping in and slipping out again.”