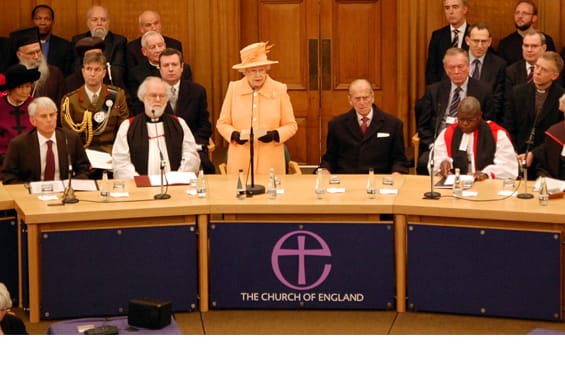 London-Queen Elizabeth II and the Duke of Edinburgh visited Church House, Westminster, on Nov. 23 to inaugurate a new General Synod that will govern the Church of England for the next five years.

"The new synod will have many issues to resolve to ensure that the Church of England remains equipped for the effective pursuit of its mission and ministry," the queen said in her address to the synod. "Some will, no doubt, involve difficult, even painful, choices. But Christian history suggests that times of growth and spiritual vigor have coincided with periods of challenge and testing. What matters is holding firmly to the need to communicate the gospel with joy and conviction in our society."

About 160 synod members, or one third, are new to the gathering.

On behalf of the synod’s 484 members, including 53 bishops, Archbishop of Canterbury Rowan Williams told the queen that "we value your wisdom and understanding, your care and concern and your manifest devotion to our church."

The inauguration followed a service of Holy Communion at Westminster Abbey where Dame Mary Tanner, president of the World Council of Churches, preached, and Williams presided.

Addressing the synod, Archbishop of York John Sentamu offered thanks for Queen Elizabeth’s "gracious words" and to Tanner for her sermon.

But the celebrations did not proceed without controversy.

Bishop Peter Broadbent of Willesden has been asked by the bishop of London to "withdraw from public ministry until further notice" due to comments posted on his Facebook page speculating that the marriage of Prince William and Catherine Middleton would not last for more than seven years and referring to the media attention surrounding the couple’s recent engagement as "nauseating tosh" — a British slang word meaning "nonsense."

Williams, addressing synod members in the presence of the queen, said: "I am sure that I speak for everyone here in expressing delight" at the couple’s engagement, adding that they "will be very much in our thoughts and prayers in the coming months." Williams’ comments were met with a prolonged applause from synod members. Broadbent was not present during the inauguration ceremony.

Continuing its historic association with the state, the Church of England maintains an established relationship with the parliamentary structures of the U.K. government and the queen, who is the church’s supreme governor and titular head. It continues a tradition of synodical government which has its origins in the medieval period. Measures passed by synod also need parliamentary approval. An overview of the Church of England’s legislative processes is available here.

Described as "the national assembly of the Church of England," the General Synod first was inaugurated in 1970 under the Synodical Government Measure 1969, replacing an earlier body known as the Church Assembly.

Unlike the Episcopal Church’s General Convention, which meets for the most part in its two separate houses of bishops and deputies, the three houses of synod — bishops, clergy and laity — meet in joint sessions biannually, once each in London and York. A third session is scheduled for later in the year, usually November, should synod need to convene for additional legislative meetings or for its quinennial inauguration.

General Synod comprises the Convocations of Canterbury and York, the two internal provinces of the Church of England.

The new General Synod, which is meeting Nov. 23-24, will be asked to approve the Anglican Covenant, first proposed in the 2004 Windsor Report as a way that the Anglican Communion and its 38 autonomous provinces might maintain unity despite differences, especially relating to biblical interpretation and human sexuality issues.

Various groups have been campaigning against the covenant in the lead-up to the synod vote.

– Matthew Davies is editor and international correspondent of the Episcopal News Service.