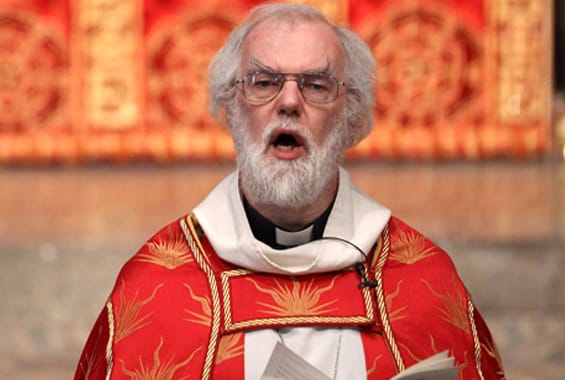 London-The General Synod of the Church of England has voted in favor of continuing the process towards adopting the Anglican Covenant, a set of principles intended to bind the Anglican Communion in light of its differences.

The Nov. 24 decision — which was passed by synod’s three houses of bishops, clergy and laity — recommends that the church should consider a draft Act of Synod that "solemnly covenants with the other churches which enter into and adopt it in making the affirmations and commitments that it contains."

The draft act will now be sent to the church’s dioceses for consideration before returning to General Synod, which may be asked formally to adopt the covenant as early as February 2012.

Before the synod debate, Archbishop of Canterbury Rowan Williams encouraged its members to support the motion and the ongoing conversation towards adopting the covenant.

"The drift of the covenant has been towards … ways with which we can, in some sense, act in coherence together for the sake of God’s mission," he said. "I hear and partly understand the anxieties about legislating family relations [but] I do want to resist very strongly that the covenant creates a central authority."

Williams said the covenant is about "trying to understand what it is to be completely accountable to one another," acknowledging that the context of the Anglican Communion is a global one to which all Anglicans have a responsibility.

The three-hour synod debate included a broad diversity of opinions about the pros and cons of a covenant, with repeated concerns expressed about section 4 of the document, which outlines a method for resolving disputes in the communion. Some critics of the covenant are concerned that section 4 may be used as a means to discipline certain provinces.

The Rev. Miranda Holmes, chaplain at the University of York, urged synod members to vote against the covenant, saying that the church should decline to use such structures to express its relationships.

"Local and global are increasingly blurred and a clash of contexts is something that we need to keep thinking about," she said. But in section 4 of the covenant, "suddenly our contexts are irrelevant," she added. "This text sounds like a couple in marital difficulties asking their wider family about whether they should divorce or not. I ask you to vote against a document that has such negative and legalistic terms."

The Rev. Mark Beach from Coventry said he hadn’t yet decided how to vote but warned that "if the communion survives it will be because we have conversed in mother tongue, not because we have tried to legislate for unity."

Julie Dziegiel of Oxford compared the Anglican Communion with the situation in Northern Ireland in the 1970s — "two sides entrenched and it doesn’t look like a solution can be found," she said.

"The covenant is intended to address these issues," she said, but added that the effect of section 4 "can only be to split the communion further and permanently. What is needed is lengthy and permanent negotiation until both sides agree to respect one another’s views and co-exist."

The Rev. Simon Cawdell of Hereford spoke in favor of the covenant, which he believes "is trying to find ways where the disagreement in our common life can be resolved in love."

Cawdell said it is a mistake to understand the covenant in judicial terms and that voting against it would send a negative signal to the rest of the communion.

Following years of discussion and several draft versions, the final text of the covenant was sent in December 2009 to the communion’s 38 provinces for formal consideration.

The covenant first was proposed in the 2004 Windsor Report as a way that the Anglican Communion and its 38 autonomous provinces might maintain unity despite differences, especially relating to biblical interpretation and human sexuality issues. The Lambeth Commission on Communion, the group that produced the Windsor Report, was formed in response to the 2003 election of Gene Robinson, an openly gay priest, as bishop of New Hampshire, a development that caused some provinces to declare broken or impaired communion with the Episcopal Church.

Bishop Peter Price of Bath and Wells told synod members about his experience of attending a recent Episcopal Church House of Bishops meeting and finding a church "offering vibrant worship, engaging theology and a profound sense of mission … There was a commitment to addressing differences in an adult way, and a commitment to staying together."

He acknowledged that the Episcopal Church also is committed to studying and considering the covenant.

"Section 4 has been revised and clearly states that it cannot override the canons and constitutions of a particular province," he said. "The issue of governance will not go away [but] if we stay with the process we are not committed to tablets of stone. Although I still have some reservations, I shall nevertheless vote in favor of continuing this process."

Canon Elizabeth Paver of Sheffield, vice chair of the Anglican Consultative Council, the communion’s main policy-making body, said that many provinces look to the Church of England for leadership in difficult times. "The covenant should be seen as a positive means for handling our diversity. It calls us to responsibility," she said. "The Church of England, the Anglican Communion, and the archbishop of Canterbury need this vote to go through overwhelmingly so that we can be seen to give some leadership."

Saxbee said the covenant seems to be "more about factory-farmed religion that about free-range faith. I hope you will continue to enjoy discussion the idea of a covenant, but hesitate long and hard before signing on."

A procedural motion to adjourn the debate until July 2011 failed as did three proposed amendments to the Act of Synod text.

In February 2009, members of the Church of England’s General Synod signaled their overall support for an Anglican Covenant but remained divided on how much authority or influence it should marshal in the communion’s 38 provinces. About one third of General Synod members are new at this November meeting.

Various groups and individuals had been campaigning against the Anglican Covenant in the lead up to the General Synod debate.

An international coalition — made up of Anglicans in Canada, England, New Zealand and the United States — on Nov. 3 said the covenant would constitute "unwarranted interference in the internal life of the member churches of the Anglican Communion, would narrow the acceptable range of belief and practice within Anglicanism, and would prevent further development of Anglican thought."

The coalition launched a website, called "No Anglican Covenant" that it says provides resources "for Anglicans around the world to learn about the potential risks of the proposed Anglican Covenant."

"We believe that the majority of the clergy and laity in the Anglican Communion would not wish to endorse this document," said the Rev. Lesley Fellows, the coalition’s moderator and a member of the Church of England. "Apart from church insiders, very few people are aware of the covenant. We want to encourage a wider discussion and to highlight the problems the covenant will cause."

Following the synod vote, Fellows issued a statement saying that the No Anglican Covenant Coalition is "disappointed" with the decision, but that it that it would "continue to oppose the covenant in the Diocesan Synods and work to defeat it when it returns to the General Synod."

Meanwhile, the conservative GAFCON/FCA Primates Council, in a Nov. 24 statement, described the current text of the Anglican Covenant as "fatally flawed," adding that "support for this initiative is no longer appropriate."

In the U.S.-based Episcopal Church, congregations are being urged to study and discuss the covenant during the next two years in preparation for General Convention in 2012.

Executive Council has predicted that any formal approval of the covenant by the Episcopal Church could not come until at least 2015 should endorsement require changes to the church’s constitution.

– Matthew Davies is editor and international correspondent of the Episcopal News Service.