Home » End of an era as Anglican House closes

End of an era as Anglican House closes

Saint John, N.B.
Victims of declining demands for print products and the trend toward making online purchases at more competitive prices, Anglican House and its neighbour, Ten Thousand Villages, will close at the end of this year.

Costs for repairing Anglican House’s aging infrastructure-a two-storey heritage property at 116 Princess St., in uptown Saint John-has also cut into its shrinking revenue. After much discussion, says Archdeacon Stuart Allan of the diocese of Fredericton, the Church of England Institute (as Anglican House is formally known) is dissolving and will cease its storefront operations.

While Anglican House has been an ever-evolving stomping ground for Anglicans, the faithful and the fair-minded, it has long fought to stay relevant as people’s attention and priorities shifted away from the church.

Once a site of dialogue and discourse for issues of the day, Anglican House became one of many options for the converging of the like-minded, having to compete against rapid forms of communication on the Internet and its various platforms.

It’s now up to the church to adapt and become involved in places where discussions have migrated, said Allan, who is president of the institute.

“Our resources have dwindled and we are led to believe that God is leading us to consider different and innovative ways to go out into the world to spread the Good News,” Allan said in a written statement. “How that will look will be an ‘Abraham Moment.’ ”

Efforts to revive the space by partnering with Ten Thousand Villages have been undercut by the ailing New Brunswick economy, which has struggled to fully recover from the global recession in 2008 and has seen the out-migration of many of its people.

There was hope that offering fair-trade goods would attract a diverse following, yet one that reinforced its ministry.

But with a shrinking consumer base, the expansion failed to boost revenues to a sustainable level. “The merchandise [at Ten Thousand Villages] has beauty of craftsmanship, country and people history, [but the] fair share prices” of these goods are often beyond what struggling earners can afford, said Allan.

Efforts were made to cater to other Christian denominations, with Anglican House regularly filling requests for hard-to-find books and adding to its inventory a growing selection of DVDs, CDs, greeting cards and books. But for the most part, nearby parishes were Anglican House’s main clientele, who turned to it as a source for bulletins, candles, wafers, prayer books and more, said Richardson.

“As a result, there was not much that Anglican House could not provide for the Christian community,” he added.

The closure of Anglican House “will be felt both locally and regionally,” since it serves the Anglican diocese of Fredericton-all of New Brunswick-said Richardson.

While diversifying may have helped stave off Anglican House’s closure, time has caught up, and the building itself is in disrepair.

Built in the mid- to late 1880s (existing data offers conflicting dates of 1884 and 1889) after the Great Fire of Saint John in 1877, the property retains two original ornate fireplaces, along with the banister leading to the upper level, and intact geometric-and-floral tiling. Less visible signs of its age are leaky ceilings and a roof in need of replacement.

Today, “mending and gluing and ‘making do’ are no longer options,” said Allan.

Moving to another location was considered, explained Richardson, but without a suitable alternative, the idea was tabled. “The cold reality is that with growing and cheaper Internet stores and shrinking parish needs, it meant that the ministry seems likely to not become viable going forward,” he said.

The more responsible option as a steward would be to pay off debts by selling inventory rather than incurring another year’s worth of losses, he added.

More than just a store fit to stimulate the curiosities of the faithful, Anglican House opened itself up to the community large. From artisans to academics to adult learners, its ministries extended beyond the spiritual.

Its warm staff has welcomed many. Only months ago, it offered a studio space-complete with looms and knotty bits of yarn-where local artisans worked on their craft. And several years back, it hosted Read Saint John, an adult literacy program that has since moved its location.

Further back in time, the rear end of the building was once used as an auditorium for meetings, teas, lectures and discussions, according to a 1980s archival document. “Many a decision affecting the life of the Diocese took place in the back auditorium by the Executive of the Synod,” according to the document.

Around 1986, it was decided that the Anglican synod office would relocate to Fredericton and in turn, the bookstore would be enlarged to accommodate growing displays as demand for resources increased.

Apart from its merchandise, Anglican House also had a lending library known as the Diocesan Resource Centre, with over 1,000 items-DVDs, ministry kits, Sunday school curriculum-available for loan. Richardson said there are ongoing discussions within the diocese about where the resource centre might be located. 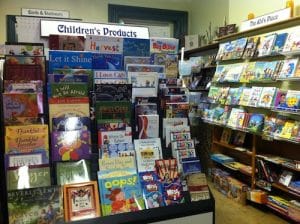 Today, inside Anglican House you’ll find a nook for picking out cards and stationery for any occasion, a substantial selection of children’s literature and devotionals, among other theological resources.

Beside it is Ten Thousand Villages, known for its fair-trade certified, crafted necklaces, purses, home décor items and food. There, the portrait of Rev. Brigstocke, the founder of the Church of England Institute, sits above the slate fireplace-one of the surviving features of the building.

With Anglican House’s closure, the property will be transferred to the diocese to determine the building’s future and function.

Meanwhile, Ten Thousand Villages will continue to have a presence, albeit limited to a festival in Petitcodiac and another in Saint John.

Allan said Anglican House’s values would carry over into the future. “We feel a real sense of loss, but we take the ideals and hopes and the fruit of many of those over the past generations into a new place where God may be leading us.”