Diocese of Niagara bishop calls for rite for same-sex blessing 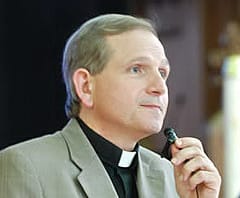 The bishop of the diocese of Niagara, Michael Bird.

The bishop of the diocese of Niagara, Michael Bird, on Nov. 6 said he intends to follow in the footsteps of two other bishops in the Anglican Church of Canada who have informed their synods about their intention to develop a rite that would allow the blessing of same-gender couples who have been civilly married.

“As is the case with our brother and sister Anglicans in the dioceses of Montreal and Ottawa, I believe we are among those who have been called by God to speak with a prophetic voice on this subject,” Bishop Bird said in a letter issued on the eve of the diocesan synod scheduled Nov. 7 to 8 in Hamilton, Ont.

“I, therefore, intend to ask for a rite to be developed for the blessing of same-sex couples who have been civilly married, along with a process to enable these blessings to take place that will at the same time honour the diversity of tradition and theology that exists across Niagara,” he said.

Bishop Bird said it is his hope that the process will “move ahead as expeditiously as possible and that I will be in a position to report back to the diocese within the next few months.” He assured, however, that all clergy and all parishes would be “fully free to follow their own conscience on this matter, as and when we are able to move forward.”

Bishop Bird’s announcement came on the heels of a recent statement issued by the house of bishops that a “large majority” of its members could affirm “a continued commitment to the greatest extent possible” to a two-year moratorium on the blessing of same-sex unions, while recognizing that this would pose difficulty for some dioceses “that in conscience have made decisions on these matters.” They also said they would accept the request made at the recent Lambeth Conference of bishops for moratoriums on the ordination of gay bishops in same-sex relationships and on cross-border interventions.

In an earlier statement, Bishop Bird expressed “profound disappointment” with the statement and the deliberations that took place Oct. 27 to 31. “I want to state clearly that I do not support the moratoria as it has been articulated,” he said. “Even more disappointing is the fact that an opportunity has been missed to find a creative and generous solution to one of the most momentous challenges our church has faced in many years.”

Earlier, on Oct. 24, the bishop of the diocese of Montreal, Barry Clarke, announced his intention to establish a commission that would draft an appropriate rite for same-sex blessings and guidelines for its implementation. That same weekend, the bishop of the diocese of Ottawa, John Chapman, said that the diocese would take steps to develop a rite for same-sex blessings and that one parish would be allowed to offer it as a start.

Archbishop Fred Hiltz, primate of the Anglican Church of Canada, has described the bishops’ statement as “very honest.. from the point of view that it clearly reflects the reality of the Canadian church … that there are some within the house who would not stand within that majority.”

Archbishop Hiltz said he was aware that it would be met with mixed reactions. “There will be those who will be pleased that we devoted so much time to this matter. There will be those who will see this statement as an honest reflection of where we are as a house of bishops, where we are as a Canadian church,” he said. “There will be some who will say, ‘you’ve created space for some dioceses and we’re not comfortable with that; moratorium is moratorium.’ But I think in terms of the communion, most reasonable people will look at this statement and say, ‘they wrestled with it.'”

Archbishop Hiltz said that, “irrespective of my own position,” he had encouraged the bishops in their closed-door discussions to “exercise gracious restraint” as had been requested by Archbishop of Canterbury Rowan Williams, who had also warned that the Anglican Communion would be in “grave peril” if the requests for the three moratoria were ignored.

(Parts of this story, first published Nov. 6, have been revised.)