Home » Climate change an urgent moral issue: ‘We have been called to a revolution’ says bishop

Climate change an urgent moral issue: ‘We have been called to a revolution’ says bishop 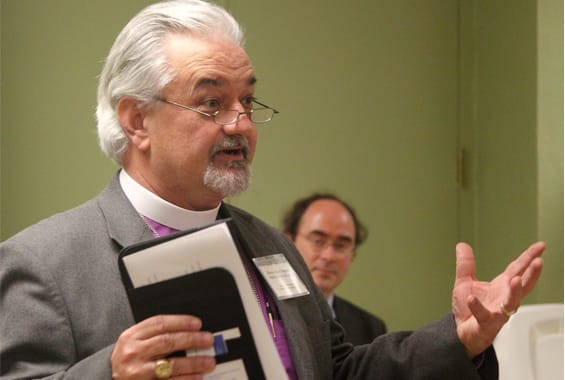 OTTAWA – Action on climate change is becoming so urgently needed that even  scientists trained not to make value judgements see it as a moral  issue.   What’s more, we may be “running out of time,” says Dr. John Stone, adjunct  research professor, geography and environmental studies, at Carleton  University in Ottawa.

“Climate change has now become such a threat  to our society, economy and environment that some of us find it difficult,  if not irresponsible, to remain within our [objective] disciplinary domains,”   he told a Nov. 14 workshop at The Church of St. John the  Evangelist (Anglican) Church here. “We have defined the problem, now we need to put all our efforts  into developing and implementing solutions.”

Dr. Stone is also vice-chair of a working group of the  Intergovernmental Panel on Climate Change. The workshop is part of a series on  environmental decline and climate change moderated by the Rev. Dr. Mishka Lysack, an Anglican priest and assistant professor of social work at the  University of Calgary.

Bishop John Chapman of the Anglican diocese of Ottawa, spoke from  a faith perspective to the over 50 people who attended the workshop,  entitled, Science and Faith: Climate Change as a Moral Issue.  “Through the cross, Christ redeemed the world, not just humanity, he said.  “All has been redeemed.”

It is the theology of the cross that “embraces  covenant rather than domination,” and one that requires a change in the way  many Christians think, said Bishop Chapman.   ”Truly, we have been called to a revolution-and I’m thinking of the  word in terms of how we react to  one another, how we interact with the established norms that we have  inherited generation after generation,” he said. “That’s revolutionary and there’s sacrifice when one engages in a revolution.”

The bishop noted that General Synod 2010 in Halifax in June unanimously adopted  a resolution on climate change that includes joining with other faith  communities and secular groups to press the federal government to adopt a  climate action plan to reduce greenhouse gas emissions by 25-40 per cent  by 2020. In October, in his “charge” to the synod of the diocese of Ottawa, Bishop Chapman said he will ask the diocesan council to form an  environmental working group to provide information  and guidance on environmental issues.

In an interview, Dr.  Lysack said that workshop discussions indicate “people  want to take action and on many different levels.” Further, he feels that the moral-based  social movement seems to be at a “tipping point’ where  people want to take collective action on climate change. What’s needed now, he said, are community structures “that will help us work effectively together, share resources  and develop a clear, prophetic, as well as a moral voice in  the public square.” In some ways, he added,” by doing this we may be  reclaiming the very essence of our faith that perhaps we’ve been out of  touch with for some time.”

The workshop was held the same day as Conservative senators, in what the  NDP called “an ambush,” voted down a climate change bill that had been  passed in the House of Commons. Bill C-311 would have had the government  establish five-year plans to meet greenhouse gas emission targets by 2050.

Joe Gunn, executive director of Citizens for Public Justice and a co-chair  of the climate change series, told the Journal that for the organizers of  the meeting, “This vote represents a major defeat in the efforts of  Canadians to responsibly meet our stated goal to reduce greenhouse gas  emissions.” He called the vote in the Senate “an indication of the  current government’s refusal to abide by commitments Canada has already  made, and shows the profound depths to which this government’s leadership  on environmental issues has sunk.”

Art Babych is the editor of Crosstalk, the newspaper of the diocese of Ottawa.