Home » Churches transform relationships with communities through the arts

Churches transform relationships with communities through the arts

In a largely secular era, the challenge of building relationships beyond church walls has forced many Anglican congregations to rethink their traditional approaches to fostering community.

For an increasing number of churches, the arts have become a major outreach tool in their efforts to revitalize parish life and welcome new members. Faith and art have long been intertwined in the Christian tradition, with icons, paintings, stained glass windows, and choral music historically serving as popular means to spread the gospel.

Today, art forms such as painting, music, and poetry are helping congregations reimagine their spaces while providing an appealing point of entry for local residents into the life of the church.

In Victoria, B.C., two Anglican congregations, St. Matthias and St. Peter’s, Lakehill, provide examples of the different ways in which congregations are using the arts to explore spirituality and providing a welcoming space.

A non-profit arts space, the St. Matthias Chapel Gallery showcases “original artwork of a socially relevant, contemplative, and reflective nature,” according to its website. The gallery is the brainchild of lead curator Nicky Rendell, an artist and nurse who has been a parishioner at St. Matthias for 20 years.

In 2017, Rendell was invited to show some of her art, inspired by St. Matthias bringing in a Syrian refugee family. The work depicted “the destruction of a culture and a civilization” resulting from Syria’s ongoing civil war.

“People really responded to it, and it stimulated all sorts of conversation and reflection,” she recalled. “It facilitated a whole service around grief and loss that was very much needed in the community. So I thought, ‘Well, boy, there is definitely a place for art in our churches.’

“[The arts] have been in the churches for millennia. But this is certainly a new venture bringing art into the churches where you can show some really interesting socially relevant and reflective work, as opposed to iconography and religious works. I realized that it didn’t need to be religious work shown in a church, and that the church was the most wonderful platform for social change and commentary and discussion.”

Rendell made a proposal to transform the chapel space into an art gallery, which was wholeheartedly accepted by the parish council. A grant from the diocesan Vision Fund helped turn the vision into reality, and the gallery opened in September 2018.

Exhibits typically run for five weeks. The chapel gallery is a multi-functional space, with worship taking place amidst the displayed art. Parishioners use the space for everything from Holy Communion to book group meetings.

“We perceive [the chapel gallery] as our gift to the community,” Rendell said. “It’s a gift where we can facilitate community engagement. People can come to a safe place, they can be enriched by their art, they can be informed by the art, they can enjoy company, and basically leave feeling a little bit possibly transformed or enriched at the end of the day.”

“It’s a place where people who are slightly skeptical about going into a church can go,” she added. “A lot of people come in and they’re quite surprised at the sort of symbiotic reaction that you get with art in a sacred space, because it’s something that they haven’t necessarily experienced before.”

‘Meet people where they are’

At St. Peter’s Anglican Church in Lakehill, the spiritual aspects of art have found expression in the Life Spirit Art Studio, a weekly ministry led on a volunteer basis by parishioner Jane Palliser.

Every Wednesday from noon to 3 p.m., Palliser hosts a small group meeting in which participants access their creativity by making art. Participants gather in a circle and find inspiration in a poem, music, or lecture, after which Palliser will introduce a new technique or method that the group can draw upon in free art activity.

With a background in education and human services, Palliser views art as a soundboard for expression and introspection. She believes the visual language of art can serve as a complement to a church in which “the oral tradition is very prevalent.”

“For those of us who learn differently, who experience their spirituality not just through a Sunday church service, but through our everyday life and through especially creative activities, I felt that the diocese, the church, should be open to the fact that we all have experiences and grow in different ways through different activities,” Palliser says.

“There’s such a drive for an experience of spirituality with the world out there that somehow, this has to be acknowledged in the traditional Christian church. And many who are driving this through creativity are women.…With the church dropping in numbers, you’ve got to see what is relevant to the world and meet people where they are.”

Most of the participants in the Life Spirit Art Studio are women. Some are Indigenous people. Some do not attend regular church services.

Resources for running the Life Spirit Art Studio, including advertising and art supplies, come in part from the Vision Fund, which the Diocese of British Columbia had made available after the closure of many churches. A $10 drop-in fee further covers some of the costs.

Though Palliser has organized the studio for more than two years and developed her own curriculum, the work for one person of maintaining the program has proven stressful. She hopes that the diocese might provide more support for the studio—now changing its name to the Creative Community—as a way of reaching new people.

“Jesus walked a path in everyday life, he walked through villages and towns, and he met people exactly where they are…Many people in their 30s and 40s now have no idea about the concept of God, or if they do, they don’t have it in the same way as the way we were brought up in church, through the ritual of a service and the Bible. [The art studio is] a way of accessing God through a creative activity.”

In Ontario, the arts have played a significant role in exposing churches to the wider community, particularly young people.

For the better part of a decade, Christ’s Church Cathedral in Hamilton has been opening its doors as part of the community’s monthly Art Crawl event, which takes place on the second Friday of every month. The Art Crawl is part of a wider transformation of the area around the cathedral, which in recent years has become saturated with artists, studios, and galleries.

During each Art Crawl, the cathedral provides guides to welcome the public and provide information about its historic building, which with its architecture, woodwork and stained glass windows is itself a work of art. For the last four years, the cathedral has also offered space for small art exhibits. Music is another major element, with the cathedral’s organist performing for visitors.

Interacting with the hundreds of visitors who come to the cathedral during each art crawl—or the 11,000 who attend during the weekend-long event known as the Super Crawl—has provided a way for it to connect with residents and artists and discuss their work around social justice, such as outreach to the poor through the St.Matthew’s House program.

Canon Sharyn Hall, associate priest, highlighted the transformative effect that art has had both on the local economy and the cathedral itself.“If you looked at this community…30 years ago or so, it was a very depressed area…Coming back as a retired priest,I’ve just been so inspired by the fact that this area is trying to regenerate itself, and it has been art that has sort of been the spark.”

She added, “We’re situated right in the middle of downtown Hamilton, and we have become very much a part of the whole arts scene that’s taking place, as well as social justice issues.…It’s important to us that we are connected to our neighbours.”

At the church of St. Luke the Evangelist in London, Ont., connecting Anglicans to their neighbourhood through the arts has become the lynchpin of a new form of university ministry. Known as Luke’s Place, the ministry is a response to the university community that has grown up around the property of what once a village church for the village of Broughdale.

With St. Luke’s now located in the heart of the University of Western Ontario, the church partnered with Huron UniversityCollege in September 2018 to launch Luke’s Place, which Canon Adèle Miles describes as “a base or a developing base for fresh expressions in ministry aimed at the university community, the 18–30 population.” The Anglican Foundation recently provided a $15,000 grant for Luke’sPlace to help fund its first year of operation.

The heart of Luke’s Place thus far is a weekly coffee house, which takes place every Thursday night. At the coffee house, the church invites students to come and tell stories, recite poems, play music, and engage in conversations with members of the congregation.

St. Luke’s already has links with the music program at the university, with its director of music and two choral scholars part of the Faculty of Music at Western. Working with the university, the church has brought in music students to help facilitate the coffee house, such as by offering guitar lessons and helping the church produce advertising for the event.

In the case of the coffee house, the arts serve as a gateway for building a sense of community and friendship with the students.

“We wanted to make it a faith welcoming place where students could gather and build relations of trust, where they could have conversations about things that were important to them, and to us, that we might actually begin todo things to work together to make a difference in God’s world,” Miles said.

Through their participation in the coffee house, both students and parishioners have drawn closer together. Carol Gauvreau, a member of the parish council and active lay person at Luke’s Place, said the event often attracts students who sing or play instruments such as keyboards or guitar.

“Sometimes … we’d have people come and they’d written a song and they wanted to see an audience reaction—and in a safe place, because I know everybody felt very safe there,” Gauvreau said.

Julia Buker, a Western student currently doing her master’s degree in vocal performance, attends Luke’s Place regularly. She appreciates the chance to have conversations at the coffee house and “get to know people you wouldn’t necessarily talk to otherwise.”

“I like the people,” Buker said. “I like Adèle, I like the social aspects of it, and I love how they’re reaching out to the community and really getting the community involved.” 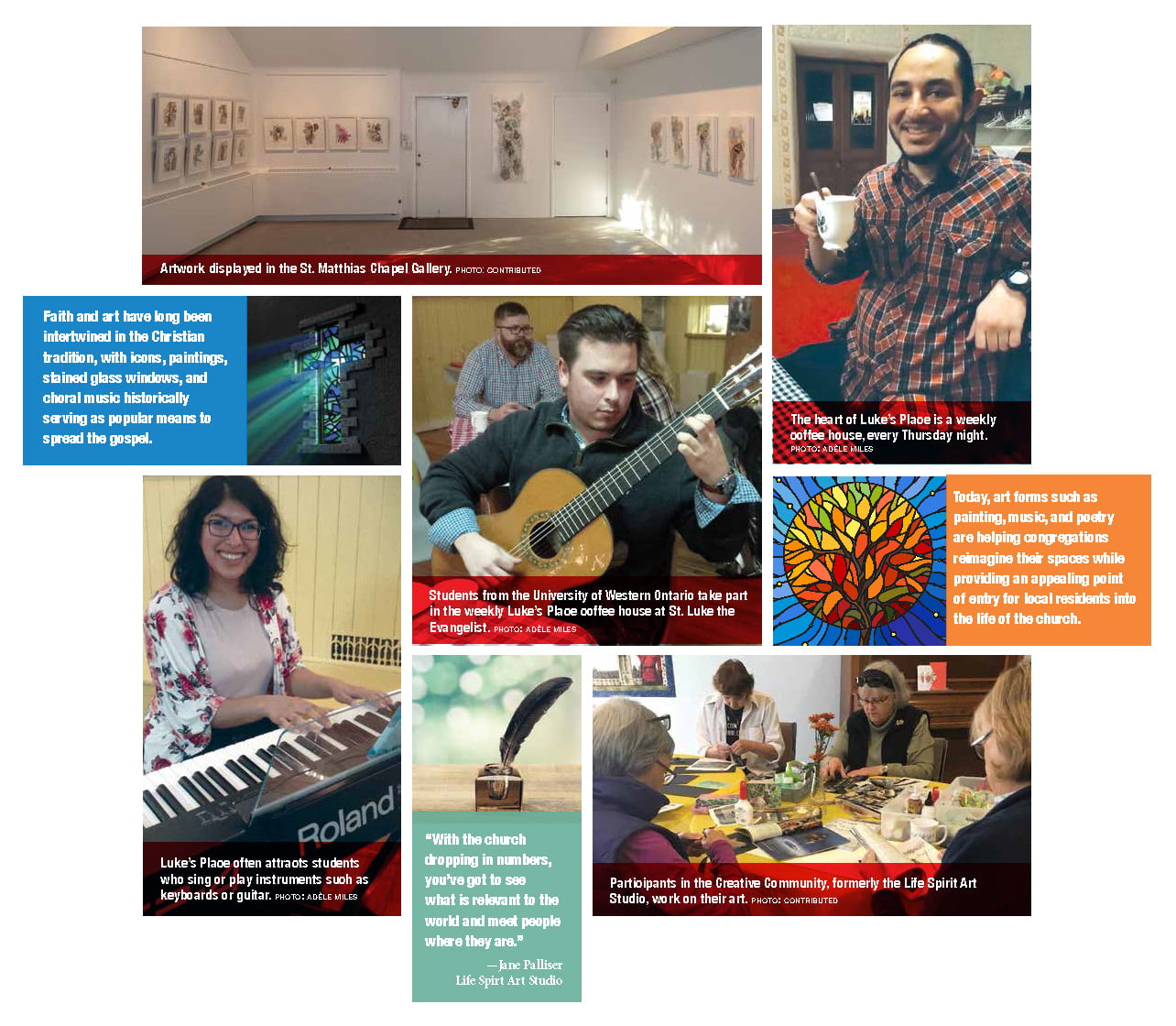