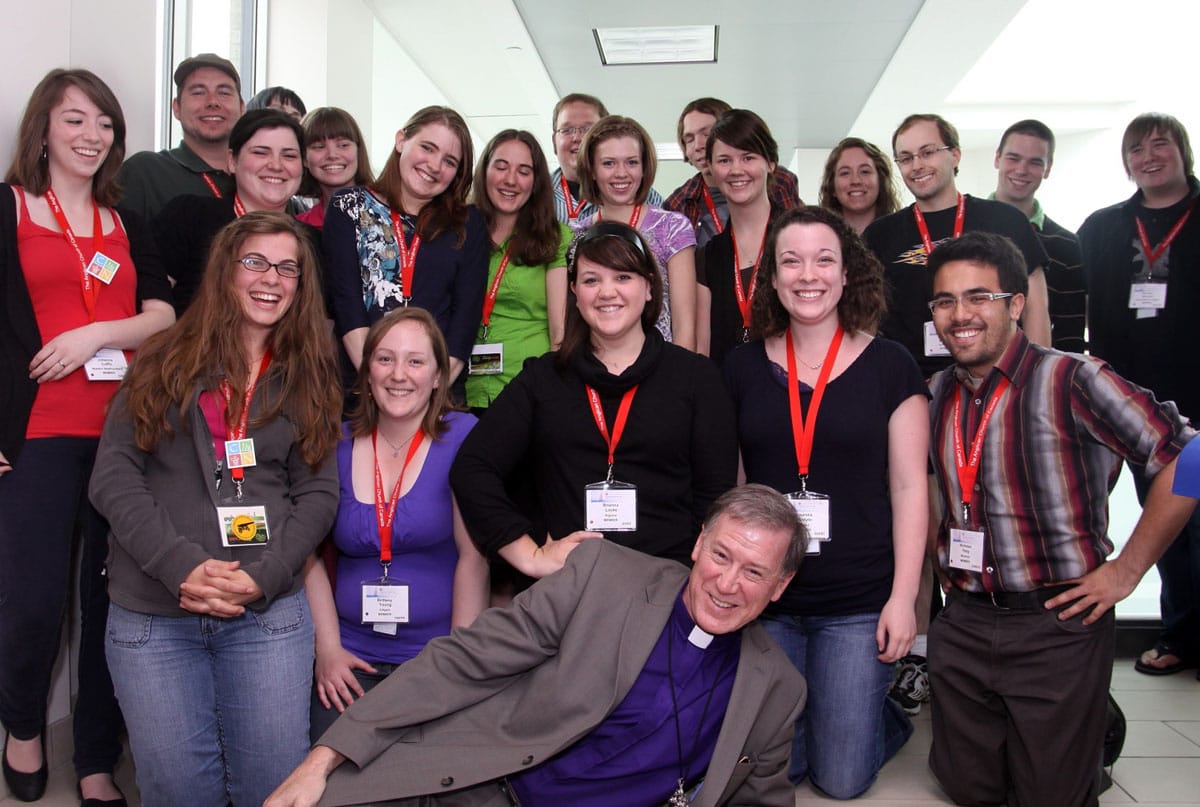 They are youth delegates to General Synod 2010 and 22 of them achieved quick rapport with their primate, Archbishop Fred Hiltz, at an informal lunch Saturday.

“This is a great conversation,” the enthusiastic primate commented about midway through the gathering. “I wish it were something the whole synod could have.”

Archbishop Hiltz left the nature of the discussion pretty much up to the 16 young women and six young men from across Canada, but began with something of an apology for how much of the synod thus far had been taken up with procedure.

That, however, did not seem to be a problem.

The youth delegates picked up the ball quickly and launched into a lively discussion – largely about procedure. Among topics were the relative merits, from a youth delegate’s point of view. Most liked being at a General Synod table with other members of one’s diocese and of being with a cross-section of delegates in the “galley groups” that are something of an innovation at this year’s General Synod.

Some said they appreciate the support of fellow members of their diocese. Among them, Brittany Young said she gets respect from fellow members of her own Calgary diocese but found the attitude of some other older General Synod delegates somewhat patronizing.

Others said they felt awkward about casting a vote that might differ from that of other members of their own diocese at the same table. One youth who had also been a delegate at the 2007 synod in Winnipeg confided that he had figured out a system for voting discreetly: step out of the hall to watch the debate on a video screen and then mosey back into the hall when a vote was called, stand against a wall and vote inconspicuously from there.

Yet another youth delegate flabbergasted her colleagues-and the primate-with an account of a corridor conversation in which someone suggested that she was not a proper youth delegate because she is out of school and has a job.

“You have ability and energy,” Hiltz said. “Claim your place on the floor of the synod.”

Sympathy went in both directions. Several youth suggested Hiltz be firmer about enforcing time limits on speakers. (He said that was already in the cards.)

Breanna Pizzuto of the diocese of Ottawa commented, “Fred, I don’t know how you stay so composed.”

Some of the conversation turned to experiences of being an active young Anglican-often one of a rare breed-in their home dioceses, some of them with few priests.

Brianna Locke of the northern Ontario diocese of Algoma said some young Anglicans with much to offer aren’t getting a chance to show what they can do. But that is not her own case, said the young woman, who is providing interim ministry at a parish for the summer and considering enrolling at Wycliffe College in Toronto.

“Half of us just want to be asked to participate,” she said, adding that she suffers from over-participation. Sometimes, said Locke, she gets so busy that her own spirituality suffers. “I felt lost in my own ministry and forgot what the whole purpose of the church building was.”

The primate also offered a glimpse into his own plans. He said he put a lot of energy in his first three years trying to pull Canadian Anglicans together as a national church. Now, he expects that as the Anglican Church of Canada heads into “troubled waters” in the worldwide Anglican Communion, he may be “spending a bit more time at Church House in Toronto helping the Anglican Communion as a whole see what we as a Canadian church can bring.”

A few hours later, synod delegates had a chance to taste an early fruit of the luncheon gathering. As the synod broke for supper, delegates were invited to join in a “Johnny Appleseed” grace, a favourite of Anglican youth groups. That was something Hiltz and youth delegates cooked up over lunch.