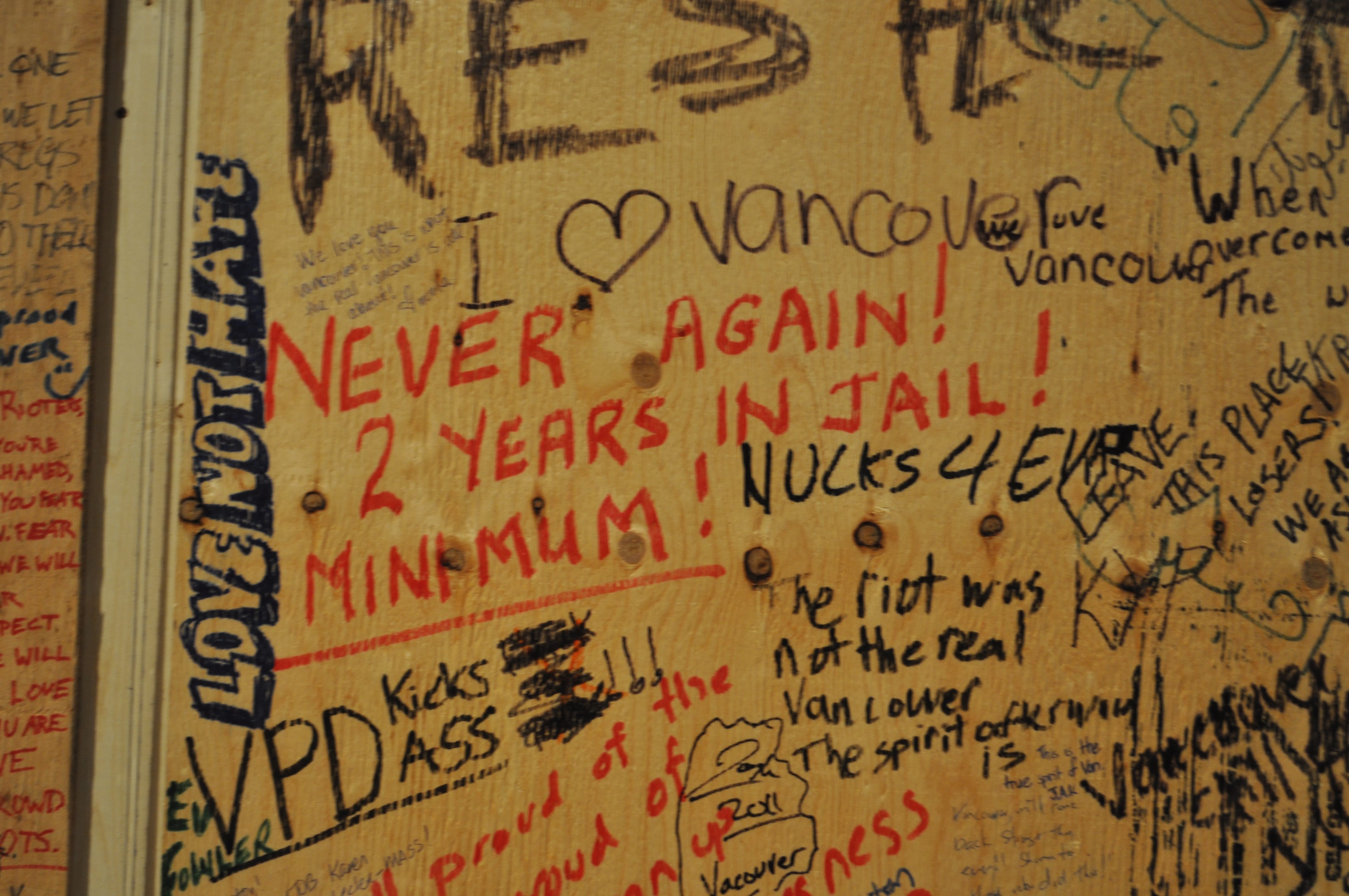 June 15th, 2011: the Vancouver Canucks lost Game 7 of the Stanley Cup final series to the Boston Bruins. Minutes after the game ended, a riot broke out amidst thousands of people gathered in Vancouver’s downtown core. Several hours of violent destruction followed in which dozens of windows belonging to businesses were smashed. In the aftermath, most were boarded up with sheets of plywood.

All through the night, clean-up crews worked to restore the city. The next day, citizens of the lower mainland, many of them hockey fans, gathered to help clean up. As they cleaned, they wrote thousands of messages on the boards. Most were in reference to hockey saying that true hockey fans would never behave in such a way. Others condemned the violence and looting and spoke of deep feelings for the city.

As part of the “restore/reconnect/one year later project,” honouring ongoing dialogue in the community, Dean Peter Elliott, rector of Christ Church Cathedral, in partnership with the Downtown Vancouver Business Improvement Association and the Museum of Vancouver, took delivery of eight of the boards. They were set up in a display case in the cathedral’s chancel and from Jun. 14-17, some 2,000 people viewed them in the context of sacred space on the anniversary of the riot.

On Jun. 15, Christ Church Cathedral hosted a non-denominational community gathering with discussion led by people who had experienced the riot as well as those involved in the restorative justice movement in Vancouver. Speaking at the gathering, Dean Elliot noted that many still needed to share their stories of that night. He quoted Archbishop Desmond Tutu , who said: “Good is stronger than evil; love is stronger than hate; light is stronger than darkness; life is stronger than death…”

Writing in the Vancouver Sun (Jun. 18), Prof. Brenda Morrison, a restorative justice expert at Simon Fraser University, pointed out that “police costs of more than $10 million have resulted in 674 recommended charges against 225 individuals. Of these, the Crown prosecutors have approved 276 charges against 104 individuals. Only two people have been sentenced, receiving 17 months and one month.”

Although most of the cases are now before the courts, there is currently no process in the criminal system “by which offenders are directly accountable to the businesses they rampaged, nor to the city of Vancouver,” said Prof. Morrison.

Adapted from a report by Randy Murray, director of communications for the diocese of New Westminster. The report in its entirety can be viewed online here.