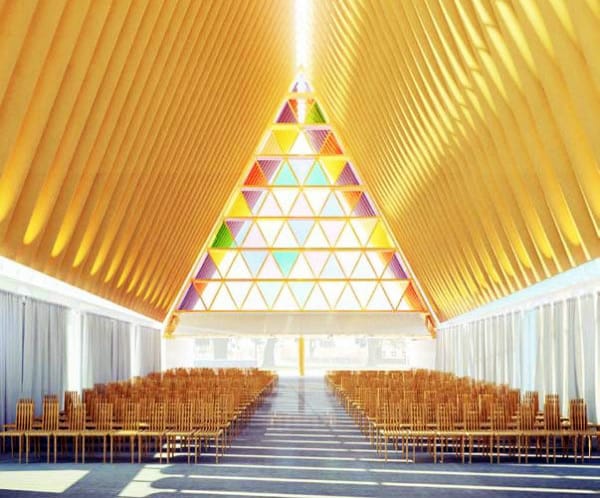 The recyclable $4.1 million structure will seat 700 people and be used for 10 years. Photo: Courtesy of Christchurch Cathedral

Designed by “emergency architect” Shigeru Ban, the transitional 82-ft cathedral is being constructed with 104 tubes of cardboard as well as timber beams, structural steel and a concrete pad. It is expected to be completed by December 2012.

The $4.1 million cathedral, which can seat 700 people, is being built on St. John’s Latimer Square site. The cathedral congregation will use it for 10 years, after which it will become the worship centre for St. John’s parish, whose church properties had to be demolished after the earthquake on Feb. 22, 2011.

The A-frame style cathedral will be weatherproof and fire-resistant; it is expected to last more than 20 years.

Ban, who is Japanese, has used cardboard as a material for other temporary structures, including a “paper church” which has since been used as a community centre after the 1995 earthquake in Kobe, Japan.

The cardboard cathedral will be the largest “emergency structure” designed by Ban and his associate architect, Yoshie Narimatsu. Both have contributed their time free of charge and have given the building’s design as a gift to the cathedral, the diocese of Christchurch and the city.

The transitional cathedral demonstrates that “Christchurch is moving forward,” said a press statement by Richard Gray, chair of the church group spearheading the cathedral’s rebuilding efforts. The cathedral would be recyclable, proving that “people are finding solutions that are not only innovative but environment-friendly,” added Gray.

“I think the building has the potential to be an icon on its own right,” said the church’s spokesperson, the Rev. Craig Dixon.

Diocese of Christchurch Bishop Victoria Matthews said she was “delighted” with the plan.

The structure is also expected to open its doors to local community events, since many concert halls and other venue were damaged by the earthquake.

An annex building made up of two dozen shipping containers will be attached to the cathedral and will provide space for a cafe, shop, kitchen, meeting rooms, offices and storage.