Budget leaves ‘no room for contingency’ 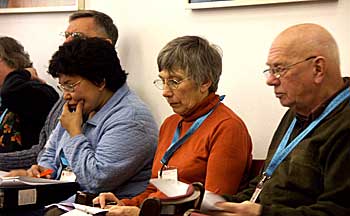 Mississauga, Ont.
Council of General Synod (CoGS) has approved a budget of $9.8 million for the national church in 2006, which is three per cent less than the revised 2005 budget and anticipates decreases in projected revenues from proportional giving by dioceses, investment income, planned giving and net profit from the Anglican Book Centre (ABC).
“The budget for 2006 has been balanced, but leaves no room for contingency,” said General Synod treasurer Peter Blachford in his report to CoGS – the church’s governing body between General Synods.
The 2006 budget forecasts revenues of $9.8 million and expenditures of $9.9 million. The projected deficit of $47,183 will be offset by “recoveries” from the government of $50,000 relating to residential schools expenditures.
CoGS also formed a budget advisory group to work with management team in the event that additional cuts are needed.
To arrive at a balanced budget for 2006, Management Team reduced General Synod expenses by five per cent or $515,000 and laid off six ABC staff members in September.
Mr. Blachford acknowledged that the 2005 budget – initially pegged at $10.5 million and reduced midway last year to $10.1 million to avoid a deficit resulting from lower-than expected donations – had been “unrealistic.” He said balancing the budget by increasing anticipated revenue “wasn’t very clever.”
It was also unrealistic, he said, to expect ABC to produce a $200,000 net profit in 2005, when, according to the report of the financial management and development c ommittee “in each of the two (preceding) years significant losses in excess of $300,000 had been incurred.”
The report continued, “Likewise, based upon the 2004 year-end results from the Anglican Appeal, it was also unrealistic to expect that the Appeal could increase its net results by 33 per cent year over year.” Thus, the finance committee said, the 2006 budget should have revenue and expense projections that are “realistic and substantiated.”
Under the 2006 budget, investment income is expected to go down 11 per cent or $9,000, a result of an erosion of the asset bases of both General Synod and the dioceses. Mr. Blachford said General Synod has a reserve of $7.5 million – a majority of which is owned by parishes and theological colleges; General Synod’s share is less than $2 million, some of which are designated funds (they cannot be used for purposes other than what the donor specified).
It also projects a decrease of three per cent, or $262,300, in proportional giving by dioceses and a 10 per cent reduction in planned giving revenue or $41,400.
The 2006 budget assumes that ABC would break even or produce a net profit.
CoGS members also spent time discussing the implications of a reduced budget on the work of various departments.
Canon John Steele, of the diocese of British Columbia, expressed concern about the impact of a reduced budget for the church’s partnerships department, particularly the loss of a job position that involves international work. (Canon Philip Wadham, mission co-ordinator of the Latin America and the Caribbean division, retires in April and there are no plans to fill his position, Instead, overall international work will be handled by two remaining co-ordinators.)
“Given the state of the Anglican Church of Canada and the importance of building relationships. We can’t just be a cheque-writing partner,” said Mr. Steele.
Ellie Johnson, director of partnerships, said her department was in a “dilemma” about retaining its current staff level or reducing grants given to the church’s international partners. “The other side of the argument is that if we cut the grants the perception is that we’re being spiteful about our non-participation at the ACC (See related story, page 8).
Under the 2006 budget, partnerships, suffered a five per cent cut or $140,027. Its 2006 share is $2.7 million, compared to $2.8 million in 2005.
The Council of the North, a grouping of financially-assisted dioceses, took a five per cent cut or $130,600; its share is $2.3 million.
The primate’s office had its share reduced by $12,500. The reduction, taken from the primate’s discretionary fund was, however, offset by funds raised during a primate’s dinner in October. (See related story, page 14). It has a budget of $374,835. The general secretary’s office received a six per cent increase or $29,700, which was required to reinstate the full-time position, which had been left vacant when Archdeacon Jim Boyles retired last July.
The financial management and development department had its budget reduced by $179,900 or nine per cent, which Mr. Blachford described as an “illusion” since savings were made possible by transferring accounting costs of departments to their own budgets and the layoff of one staff. Its budget for 2006 is $1.9 million.
The faith, worship and ministry department’s budget was reduced by two per cent, or from $471,333 to $461,333.
The Anglican Journal, which is part of the communications and information resources department, received an increase of $33,300 or six per cent, which was required to cover the loss of “significant” Heritage Canada grants, increased postage costs and the full transfer of accounting charges from the finance department. One freelance staff position was lost because of the budget cuts. It received a budget of $584,738.
ABC Publishing, also a part of information resources and development, took a 21 per cent cut or $131,254 which would mean reduced publishing of books and resources and reduced work time and pay for a staff person. The other components of information resources and their budgets: Web site ($139,900), Anglican Video ($158,500), Library Services ($166,192), and Central Services and Administration ($239,428).