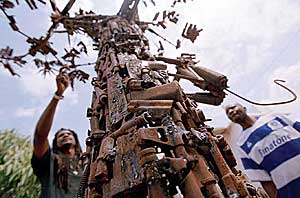 Artists Fiel dos Santos (left) and Kester, admire their work on the Tree of Life. The finished tree, made entirely out of guns such as AK47s, Walther 42s and British 4.85mm pistols, stands three metres high and weighs around half a tonne. It is on display at the British Museum for the next five years.

Bishop Dinis Sengulane of the Anglican diocese of Lebombo, who was involved in negotiations that in 1992 brought an end to the 16-year civil war in Mozambique, has invited Canadian Anglicans to join in peace and disarmament efforts in Africa and around the world.

“We value our fellowship with the Anglican Church of Canada. We would like to strengthen it more and more,” said Bishop Sengulane, citing issues like “the consolidation of peace and disarming the hands and minds of people” that are common concerns for both churches. The message of peace, must be “an integral part of the (church’s) agenda in theological training, catechism, liturgy and finances,” he said.

Bishop Sengulane, who was in Toronto last fall for the Day of Prayer organized by World Vision (of which he is the chair in Mozambique), met with the Canadian primate, Archbishop Andrew Hutchison, and addressed General Synod staff during a visit to the church’s national office Oct. 4.

“I just came to share our gratitude for the support the Anglican Church of Canada has been giving to our program of training clergy and lay people,” said Bishop Sengulane, in an interview with the Anglican Journal. “We have no other way and it’s vital to our Christian witness. I also came to say that we pray for you and we appreciate (your) contribution worldwide.”

He said that his diocese is struggling to keep up with the steady growth of congregations. This year, Lebombo received a grant of $12,500 from the Anglican Church of Canada for lay evangelism training. Past grants were $15,000 annually but have since been reduced due to cuts in the General Synod budget.

Bishop Sengulane said the well-known program of turning “swords into ploughshares” remains active in his diocese. Ten years ago, alarmed by the proliferation of guns, Bishop Sengulane had suggested a weapons amnesty program to encourage people to give up their “instruments of violence and death.”

The project, Transforming Arms into Tools (TAE), which the diocese promotes along with the Christian Council of Mozambique, persuades Mozambicans to hand over their guns in exchange for instruments of production like ploughs, bicycles, sewing machines, and carpentry tools. The weapons are cut into small pieces and sent to artists who transform them into “works of art that do not inspire violence.” Out of these scraps artists have produced chairs, tables, lamps and even a “Tree of Life” that today stands in the British Museum in London. Commissioned by the museum, the Tree of Life depicts intricate details like a monkey climbing the tree and a bird feeding its young.

Bishop Sengulane himself wears a necklace with a cross made out of firing pins. “The bad news is that this was an instrument for killing lives. The good news is that it will never happen again. It has become a message of peace,” he said. Since it began, the program has collected over 600,000 weapons.

Bishop Sengulane said that while he has “no doubts” that “peace is here to stay in Mozambique,” concerns persist that countless loose firearms remain and can still fuel crime in a country where poverty is still a major challenge. About a third of Mozambique’s population of 16 million live on less than $2 a day according to the United Nations. At present, more than half a million are starving because of a prolonged drought. “If we could build and dig some wells in some of the congregations that would help to minimize the problem,” he said.

The diocese is also active in health issues, particularly malaria and HIV-AIDS. “Seven children die every hour in Mozambique, which means that 150 children are dying every day because of malaria,” he said. Meanwhile, at least 500 people are infected daily with HIV-AIDS.

Canadian Anglicans who wish to help, he said, can “contribute to the financial appeals by the Anglican Church of Canada. They have channelled funds in the past.”

Asked to comment on reports that Anglicans in Africa are disassociating themselves from the Anglican Church of Canada because of the thorny issue of sexuality, Bishop Sengulane said his visit to the church’s national office spoke for itself.

“Why am I at Church House today if I came at the invitation of World Vision and I would have come and gone back and I would have fulfilled my obligation?” He added that the two churches have not focused on each other’s theological positions but, rather, have said, “we have a common task, let’s meet the challenge.” In the same vein, he added, “I haven’t had the Anglican Church of Canada ask me, ‘well, we’re going to assist you with your training of catechists or clergy, but we want to check on the content of your syllabus’ … What I’m saying is, we are each other’s keepers.”

He said the Anglican province of Southern Africa, of which Mozambique is part, is ready “to play any role that the Anglican Church of Canada feels we should play in order to bring a healing” to the disunity in the Anglican Communion.