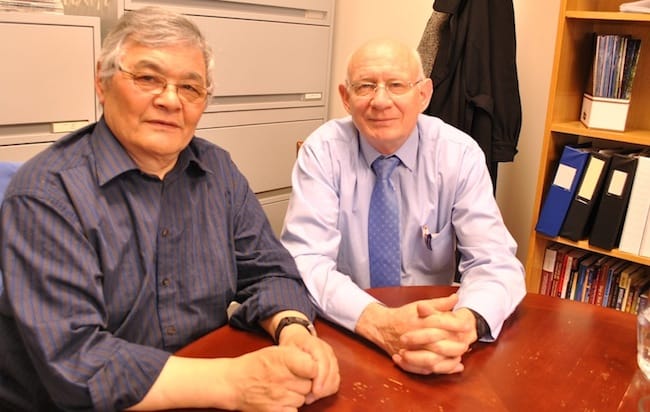 This June, Inuit living in the eastern Arctic and northern Quebec will finally have the opportunity to read the entire Bible in their own language.

After 33 years, a team of clergy from the Anglican diocese of the Arctic has finished the monumental task of translating the Bible into Inuktitut, the language of the Inuit.

The Canadian Bible Society (CBS), which is publishing the Inuktitut Bible, has already sent the final manuscript to its translation offices in Kitchener, Ont. A consecration ceremony is being planned on June 3, coinciding with the dedication service for the new St. Jude’s Cathedral in Iqaluit.

“When I was finishing the last book, I felt like the burden rolled off me,” (ret.) Bishop Benjamin Arreak, translation team coordinator, told the Anglican Journal.

The Bible would be “inspirational” for the 30,000 people who speak Inuktitut in Canada, he said. “People will be able to understand what the Scripture has to say to them. In this way, God will be able to speak personally to them.”

The Inuktitut Bible project was a learning experience for Bishop Arreak and the team. He described the challenge of translating Middle Eastern as well as ancient words and concepts that have no equivalent in the Inuit language and culture. They include words like camel and palm trees. “We had to put footnotes and pick up words that the majority will be able to understand,” he said.

Inuktitut is also a spectrum of dialects that can vary from one community to another, explained Hartmut Wiens, CBS director of translations. “In Nunavik, they speak it a little differently than in Nunavut,” so the team had to adjust the translation so that it can best be understood by many.

The project began in 1978 when then Arctic Bishop John Sperry organized a Scripture translation workshop led by Dr. Eugene Nida, a well-known linguistic translator from the American Bible Society. When it ended, Dr. Nida organized the Bible translation team to include Bishop Arreak, then a newly-ordained priest; Andrew Atagotaaluk (who became the first Inuk bishop of the Arctic in 2002); Canon Jonas Allooloo; and the Rev. James Nashak. The Rev. Joshua Arreak joined the team later.

Bishop Arreak said the project took over three decades to complete because team members worked full time as parish priests and could only set aside time for translation work every six months at a time. Bishop Arreak was able to work full-time on the project when he retired in December 2010.

The team completed the translation of the New Testament into Inuktitut syllabic first and it was published by the CBS in 1992. The King James Version has about 750,000 words and 577,000 of them are in the Old Testament.

Bishop Arreak expressed the hope that every Inuit home will one day have a copy of the Inuktitut Bible. “The word of God is a foundation of our faith. It can support us and it can inspire and strengthen us,” he said.

The Inuktitut Bible will have an initial run of 5,000 and with a subsidy from the Canadian Bible Society, each book is projected to cost about $20 to $25, said Wiens.