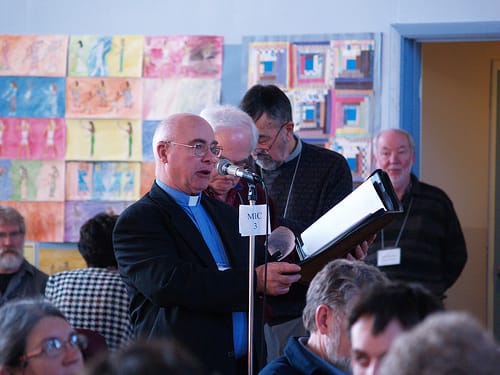 One of many lineups at the microphones. Speaking is the Ven. Dale Huston of St. John, Duncan, whose parish was urged to merge with another.

A dramatic restructuring of the diocese of British Columbia was approved in part by the diocese’s synod in early March. Seven churches-most of them in the Victoria area-are to be closed and sold or leased, and parishioners have been asked to relocate in re-constituted “hub churches.”

But the 190-member synod of clergy and laity refused to go along with the recommendations of the diocese’s transformation team to close another six churches.

The diocese currently has 52 parishes and covers British Columbia’s Vancouver Island and the Gulf Islands.

While Bishop James Cowan urged delegates to avoid “bargaining,” several groups of parishes did just that…and received a few more months or years to grow and liven their ministry. The transformation team insisted, however, that this time be limited. It also advised that recommendations be put into effect should the diocesan council determine change had not taken place.

Although many struggled to save their own parishes and buildings, all delegates seemed to endorse the thrust of the report-that Anglicans must find new ways of to expand their mission, gain new members and balance the books. In his charge to synod, Bishop Cowan praised the work of the diocesan transformation team of four clergy and four lay people for their “thoughtfulness, vision, and courage.” He commended the team’s emphasis on wholesale transformational change, noting that attempts at a gradual or incremental change over the past 40 years had not been effective enough.

Diocesan Treasurer Peter Van Giesen reported that in for the past year, the diocese has run up a $400,000 deficit on a $1.9 million budget. “It would seem to me the financial reality is out there…It’s the money,” John Lindsay, St. Peter, Lakehill, told synod. “This is about the real estate.” Lindsay’s parish was given six months to come up with a new plan.

Diocesan leaders insisted, however, that the reason to reorganize the diocese was ministry not primarily money. “None of the money from any sale or lease will go towards the diocesan budget,” said Bishop Cowan. Instead, these funds will go into a diocesan fund to finance new initiatives.

Dean Logan Menamie asked synod delegates to think “not from a parish point of view but from a diocesan point of view. This is about ministry and doing ministry differently as this diocese and the Anglican Church of Canada,” Menamie said.

Bishop Cowan told synod his own office will not be exempt from cuts and that there will be “a major downsizing and re-alignment” of about 12 diocesan staff positions following synod. He gave no further details.

A standing ovation was given following a presentation by the Rev. Scott McLeod, rector of All Saints View Royal, one of the parishes to be closed. He described “Fresh Expressions,” originally a Church of England program that tries to bring ministry to “where the people are.”

Anglicans can no longer assume people will come to church, said McLeod. He gave several examples of church being “done” in cafes, pubs, parks, though art, dance, and music. “We do not have to be limited by our perceived limitations.”

Primate Fred Hiltz said the whole church was interested in how the diocese’s approach to renewal worked out. “There’s been a flurry of activity in many places,” the Archbishop told synod. The delegates had been able “to really look at realities, to dream dreams, to think about how we might be the church in different ways.”

He added: “…let’s not blame the transition team for what we might think was a lack of deeper consultation, more extensive consultation. Let’s look at it in terms of possibility and call for continuing consultation.”

Churches designated to be sold or leased include:

* St. Martin in the Fields, Saanich

Good Shepherd on South Pender in the Gulf Islands, one point of a three point parish, will be sold.

The synod did not finish its business and agreed to reconvene on a date to be determined by the bishop and diocesan officers.

— Neale Adams is the former editor of Topic, the newspaper for the diocese of New Westminster.