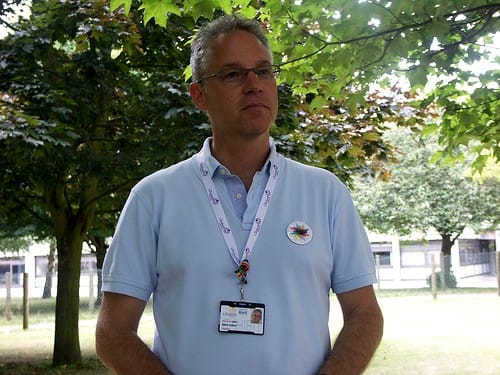 Steve Schuh, of the Vancouver chaper of Integrity, spoke at a self-select session of bishops at the Lambeth Conference in Canterbury, England.

Canterbury, England
The world’s Anglican bishops attending the Lambeth Conference here do not fully grapple with the thorny the issue of human sexuality until Thursday, July 31, but if informal conversations in the last week are an indication, they could be headed for some turbulence.

Steve Schuh, head of the Vancouver chapter of the gay and lesbian Anglican group Integrity, experienced what he called the “awkwardness” and pain of the division among bishops.

He, along with two speakers representing other theological viewpoints, had been invited by the conference to a self-select session on Human Sexuality and the Witness of Scripture that was open only to bishops last July 23.

“I was there to provide an alternative to the traditional viewpoint about what the scripture had to say about homosexuality,” said Mr. Schuh in an interview. “When I was introduced as a gay evangelical I heard a snort and one bishop stood up and left.” (He said he didn’t know who the bishop was; only that he had been from the Episcopal Church of the Sudan. Earlier, the Sudanese house of bishops attending the conference issued a statement asking the Canadian and American churches to stop ordaining homosexual bishops and priests and to end the blessing of same-sex unions. The Sudanese primate, Archbishop Daniel Deng Bul, also called for the resignation of Gene Robinson, the openly gay bishop of New Hampshire.)

Another participant asked, “Why do we need an alternative viewpoint?,” he recalled.

“I can’t interpret it too much but if that person is unwilling to hear from gay and lesbians then that concerns me. We’ve been discussing this (sexuality) issue for 30 years now…Churches are being called to listen. If some are not able to do that, I’m concerned.”

In his presidential address at the start of the conference, the Archbishop of Canterbury Rowan Williams had urged participants to use the so-called self-select sessions as an opportunity to learn and gain new insights, including hearing the voices of gays and lesbians.

“Remember that learning is just that – not necessarily agreeing, but making sure that you have done all that is humanly possible in order to understand. If you have not had the chance to hear directly of the experience of gay and lesbian people in the (Anglican) Communion, the opportunity is there,” Archbishop Williams said. ” If you do not grasp why many traditionalist believers in various provinces feel harassed and marginalized, go and listen. If you need some time and space to think through the Covenant proposals outside the opportunities in the main timetable, including hearing strong arguments for and against, the doors are open.”

Archbishop Williams added that “no-one’s interests are best served by avoiding the hard encounters and the fresh insights. Bear in mind that in this conference we are committed to common prayer and mutual care so that the hard encounters can be endured and made fruitful.”

Mr. Schuh said as “awkward” and as “difficult” as the situation might have been, he was still grateful for the opportunity to make a presentation on behalf of gays and lesbians, noting that Bishop Robinson has not been invited to the conference and has not had, therefore, an opportunity to meet his fellow bishops or have his voice heard. He said that about six bishops also approached him after the session, apologizing for the “offensive” behaviour of some of those present, including the bishop who walked out.

“I’ve talked with a couple of Canadian bishops who have been wanting to meet him (Bishop Robinson). Some of them haven’t been at the forefront of our issues and have purposely wanted to meet him,” said Mr. Schuh. He said Bishop Robinson’s presence would have given other bishops, who have denied the existence of homosexuals in their provinces, the opportunity to meet and speak to one, face-to-face. “As we heard from the primate of Sudan, many of them don’t have the opportunity in their home countries to meet gay and lesbian people,” he said. They don’t even know if they exist and, of course, that speaks to what societies they come from as to whether or not it’s safe for gay and lesbian people to be out.”

Meanwhile, some bishops have expressed frustration that the issue of sexuality, the so-called “elephant in the room”, isn’t being discussed until Thursday, or three days before the conference ends Aug. 3.

Others have said they are concerned about whether indaba — the Zulu concept of resolving conflicts and discussing issues in smaller groups and where solutions are not rushed — is the best way of approaching the contentious issue of homosexuality. There is also tension as to what action the conference would take to address the issues of unity and the place of homosexuals in the church since it is not organized to meet as a plenary where resolutions are debated and voted upon.

“We’re a family in crisis and I think we need to deal with the crisis head on but that’s not what we’re doing,” said Bishop Bob Duncan of the U.S. diocese of Pittsburgh, who, along with a group of conservatives in the American and Canadian churches, have announced the formation of their own conservative province. (Bishop Duncan is under threat of deposition by The Episcopal Church in the U.S.)

He said that the indaba was a process where “groups meets in cells and in larger groups, and the larger groups discuss something and it’s digested down and it’s reported out; the tendency tends to be that what’s reported out becomes some statement but you don’t actually deal with the problems that you’re facing.”

“Many Christians – including a growing number of evangelicals – are finding that a close, conservative reading of the biblical texts, aided by the best evangelical scholarship, suggests that the popular, disapproving summary of ‘what the Bible says’ about homosexuality is not supported by the Bible itself.”

Mr. Schuh, who studied theology at Regent College, said that his essay “addresses the dozen or so Bible passages often cited as referring to homosexuality, highlighting their original, biblical contexts and how the texts were understood within the Bible itself. It then outlines how the original ‘then and there’ of the texts and the contemporary ‘here and now’ of same-sex relationships compare, which suggests how these biblical texts might properly inform the current debate.”

(Editor’s Note: The headline of this story has been corrected.)