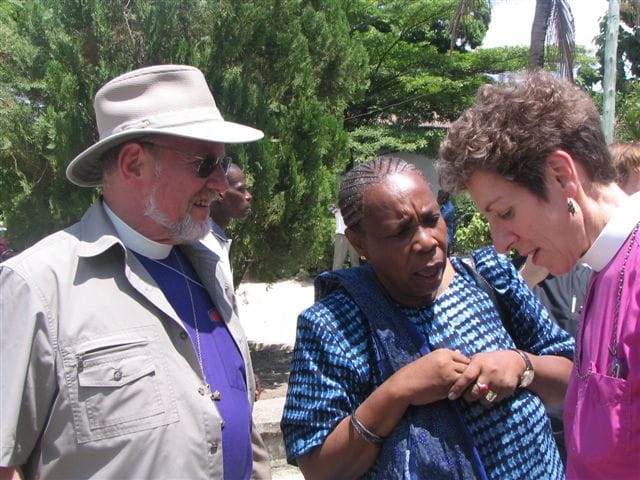 Archbishop Andrew Hutchison, primate of the Anglican Church of Canada, said that he had been “profoundly discouraged” by the communique issued by Anglican leaders warning the U.S. church of consequences if it did not abandon its liberal stance on sexuality, and had found it “tempting” not to sign it.

Archbishop Hutchison acknowledged that some Canadian Anglicans are “angry” that he signed the communique, but explained that he had taken his lead from U.S. Presiding Bishop Katharine Jefferts Schori. “I told her (Bishop Jefferts Schori), ‘It’s all about you. If you decide not to sign, I won’t sign. I’ll be there with you.'” He added that Bishop Jefferts Schori had told him that not signing the communique would send a message to the church and to the world “that at great expense and effort, we have accomplished nothing and we have nothing to say.”

The communique had “virtually not one encouraging word for gay and lesbian people who have felt so far on the margins,” Archbishop Hutchison told a staff briefing at the national church office in Toronto shortly after his return from the primates’ meeting held Feb. 15-19 in Dar es Salaam, Tanzania.

The communique demonstrated “a great struggle to try and preserve some kind of unity within the Anglican family, but the question is, at what price?” said Archbishop Hutchison. He said this was something that Anglicans in Canada would have to consider when they decide on issues around sexuality in their General Synod in Winnipeg this June.

He described the communique as a “hard-won agreement” and said that while it doesn’t directly address the Canadian church, it “does suggest things to come for Canada if we proceed in a certain direction.”

In an earlier interview with the Anglican Journal, Archbishop Hutchison said the primates’ directive for the U.S. church to unequivocally bar same-sex blessings and gay bishops is something that the Canadian church “will have to look at seriously.” He said that while the Canadian church has not ordained a gay bishop nor decided at the national level to allow same-sex blessings, it could face the same consequences “if it were to follow the same path” as The Episcopal Church. The U.S. church’s decision in 2003 to approve the election of Bishop Gene Robinson of New Hampshire, who is gay, has triggered near-schism in the Anglican Communion, which is composed of 38 provinces worldwide with a membership totaling 77 million.

Archbishop Hutchison said primates had also struggled with what he called “a chicken and egg situation” involving the American church and conservative primates who have overstepped their boundaries by providing Episcopal oversight to dissenting churches and congregations. “The presiding bishop has said that until all these foreign primates get out of the U.S. we are not going to be able to sort our problems. The interfering primates say, ‘once you have everything cleaned up and in order, we will leave.’ She said the tighter you wind this thing, the more difficult it is to take back to the house of bishops in the U.S.,” he said. “So, it’s a standoff that remains to be seen.”

Some Episcopalian bishops have already stated that if it came down to choosing between the Anglican Communion and continuing their ministry to gays and lesbians, that the U.S. church should throw its support to the latter. “Being part of the Anglican Communion is very important to me,” Bishop Mark Sisk of New York told U.S. media. “But if the price of that is I have to turn my back on the gay and lesbian people who are part of this church and part of me, I won’t do that.”
Questions have likewise been raised on whether heeding the ultimatum was a decision that could simply be taken by the house of bishops or if it needs the consent of General Convention, which is composed of bishops, clergy and laity. The U.S. house of bishops will meet March 16-21 in Camp Allen, Tex.

Archbishop Hutchison said the primates did not discuss in specific terms what the consequences would be if The Episcopal Church chose not to follow the primates’ directives. “The consequence wasn’t articulated, but the implication was that the Archbishop of Canterbury would have to look long and hard at the invitation list for the next Lambeth Conference,” he said.

The Archbishop of Canterbury, Rowan Williams, has indicated the same. However, the primate of the Church of Nigeria, Peter Akinola, has stated otherwise, telling journalists in Nairobi that the U.S. church would be asked to leave the Communion if it refuses to pledge not to consecrate a gay bishop and bless same-sex couples. “If they agree to stop, there will be a huge celebration of the Communion,” he said. “But if they chose to continue with this way of life, then they will be told to walk away from the communion.”

Archbishop Hutchison also said that the Anglican Church of Canada, which has been similarly divided over the issue of homosexuality following a decision made in 2002 by the diocese of New Westminster to bless same-sex unions, was hardly mentioned in the meeting. “To my relief and astonishment, there was no discussion of Canada; they were so eager to jump on the American case,” he said, adding that “Canada has done everything asked of it at Dromantine.” (In April 2005, the Canadian house of bishops agreed not to make any new moves toward blessing same-sex unions at least until General Synod 2007. A month later, the diocese of New Westminster voted to impose a moratorium on allowing any new parishes to permit same-sex blessings, but to continue to permit the ceremonies in those that have already received approval from the bishop. The moratorium lasts until General Synod revisits the issue in June.)

Archbishop Hutchison said that when some primates were needling the U.S. church over same-sex blessings, which have been taking place in some of its dioceses, he had pointed out that it was similarly happening in other parts of the Communion, including the Church of England. “It was an elephant in the room that needed to be named,” he said.

The Canadian primate was also asked about how primates “can dictate” policies when it was only traditionally intended to be nothing more than a collegial body for heads of Anglican provinces. “It’s so un-Anglican,” a staff member commented, to which the primate responded, “the primates’ meeting was formed in 1978 for deep sharing and consultation and the ground is shifting now.” He acknowledged that not all primates are comfortable with the change, which will be enshrined in a covenant that Anglican provinces are being asked to look at and accede to as a way of healing their division over homosexuality. “How dare we do this?” he quoted one primate as having said.

He added: “You need to recognize that there is a small core of primates who, with all sincerity and integrity in the world, believe that this is a salvation issue. (That) it is perverse, disobedient and leading the church to hell … I’m not saying everyone believes that, but there is a core.”