Home » Anglican women unite at the U.N. to call for equality

Anglican women unite at the U.N. to call for equality 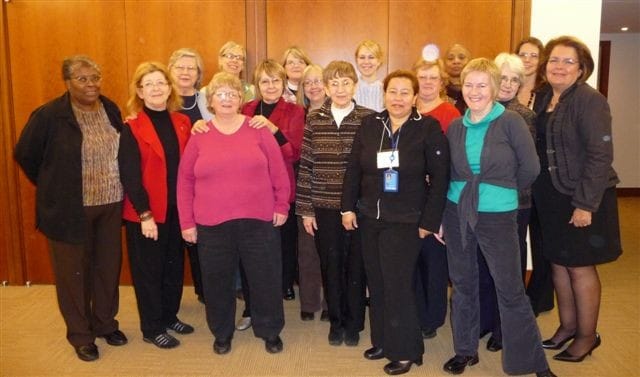 Seventeen women from Anglican parishes across Canada have returned from the 53rd annual meeting of the United Nations Commission on the Status of Women (UNCSW), which took place from March 2 to 13 in New York City.

Archdeacon Ellen Clark-King, priest associate at Christ Church Cathedral in Vancouver, said the delegates, who were part of a group of more than 100 Anglican and Episcopal women from every continent attending, were inspired to work for change. “Always at the UNCSW there is a sense of renewed energy, commitment and urgency to the work of equality for women and a renewed sense that the church should be leading the way in this rather than lagging behind,” she said.

The theme of this year’s gathering was “the equal sharing of responsibilities between men and women, including caregiving in the context of HIV/AIDS.” About 2,000 women from around the world attended events at the U.N. and parallel events organized to coincide with the conference, and about 100 Anglican and Episcopal women were among them.

Archdeacon Clark-King said unity of purpose in the group was stronger than divisions among them over such things as same-sex blessings. “We had a group of Anglicans there from all over – Rwandans, diocese of New Westminster, and our focus was entirely on looking outside at what we could do for women in our different societies,” she said. “It was a real sense that the priority is the child-led households, 90% of which are led by girls [who have been orphaned by AIDS], changing the fact that 80% of the world’s dispossessed are women and children, and so beside those facts, our theological differences tended to disappear into the background.”

She noted that some of the best presentations were on the theme of gender stereotyping, “talking about how we need to encourage men to look at new definitions of masculinity as well as looking at changing the way women are viewed. So it was very much a sense that this needs to be both men and women working together to change something so deep rooted in many societies,” she said.

Archdeacon Clark-King said that she was most angered by a report she heard at an ecumenical event; a woman from Swaziland recounted how the church had been telling women that if they contracted HIV/AIDS from their husbands, theirs would be a good death because they had submitted to their husbands. “The church should be an agent for positive change rather than, in some cases, an agent for continuing oppression,” Archdeacon King said.

Canon Alice Medcof, who is a member of the steering group for the International Anglican Women’s Network, is a veteran of these U.N. conferences. She has been working with bishops across the country to encourage more Canadian Anglican women to attend, but it is a challenge, especially because attendees must pay their own way, though some fundraise or receive grants from their parishes. Last year, 13 Canadian women attended. “For me, the fact that there were 17 of us who went this year, and the fact that we were able to have a private interview with deputy ambassador about furthering women’s empowerment was a great satisfaction,” said Ms. Medcoff, referring to a meeting that she and a few of the Anglican delegates and other Canadian delgates had with Henri-Paul Normandin, Canada’s deputy permanent representative to the United Nations,

Lynne Samways Hiltz, who is married to Archbishop Fred Hiltz, primate of the Anglican Church of Canada, attended the conference for the first time this year, helping to write reports and contributing to a statement from the delegates that will be given to the Anglican Consultative Council, which is meeting in Jamaica in May. She said the experience, learning about the way the UNCSW and the U.N. itself works, was worth the personal expense of the trip. “Hellen Wangusa, who is the Anglican Observer to the United Nations, is very good at helping people direct to what they might lobby about when they return home,” she said. “We’ve been talking about violence against women for a long time, but it is still a huge issue, especially in war. Rape is still used as a tool of war,” she said. “And, she added, “we still have to worry about violence against women and girls here too.”

Archdeacon King mentioned a particular issue of concern for Canadians. “In Vancouver, one of the things that is particularly on our mind is human sexual trafficking because of the Olympics coming up,” she said. “It’s one of the things that is expected when you get a large group of sports fans, who tend to be predominantly male. And being a port city as well, we already have trafficking here but the concern is that it will rise exponentially with the Olympics.”