Home » An absolute joy to behold’

An absolute joy to behold’ 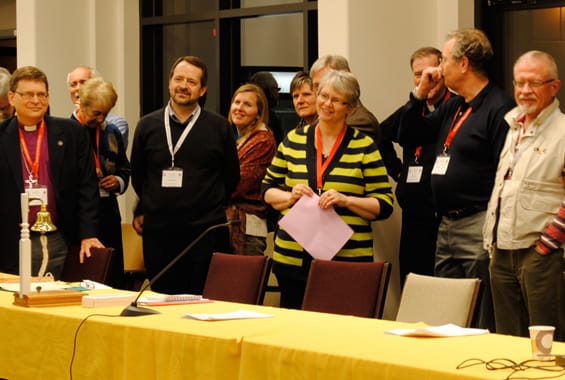 Members of the executive councils of the Anglican Church of Canada and the Evangelical Lutheran Church in Canada at their first joint meeting. Photo: Marites N. Sison

The executive councils of the Anglican Church of Canada and the Evangelical Lutheran Church in Canada (ELCIC) began their first joint meeting here, from Mar. 31-Apr.3, with the Anglican primate, Archbishop Fred Hiltz, calling the gathering “an absolute joy to behold.

“This is an exciting time, an historic moment and it’s just tremendous that we’re here together,” said Archbishop Hiltz in his opening address. “We’re here to give thanks for what has been accomplished, and we’re here to till some new ground…”
The meeting “marks an important step in deepening the full communion relationship between the two churches” that started with the signing of the Waterloo Declaration in 2001, said a joint press statement issued by the two churches.

For the next three days, the councils will spend time to look at progress and imagine the future. “What’s the next big step that these two churches will take together?” asked Archbishop Hiltz.

ELCIC National Bishop Susan Johnson said that in addition to deepening its “most effective partnership” with the Anglican Church in Canada, the ELCIC is forging an “increasingly close partnership” with its sister church in the U.S.–the Evangelical Lutheran Church in America, particularly in the area of global mission.

The ELCIC also intends to “participate fully” in the Truth and Reconciliation Commission of Canada, whose mandate is to document the legacy of the Indian residential schools in Canada.

She sought prayers for the ELCIC as it develops a “social statement on human sexuality,” an issue which has triggered “a certain amount of anxiety” among its faithful.

Archbishop Hiltz also discussed matters ranging from the church’s finances to its commitment to the Anglican Communion and indigenous ministries. He said:

* The Anglican Church of Canada is playing an even more significant role in the life of the Anglican Communion. At least 15 Canadian Anglicans have been invited to participate in various international bodies.

* Although “under scrutiny” by the Anglican Communion around issues of sexuality, the Canadian church is now being seen “as people who respond to the requests of the Communion, people who have a way of working through difficult issues and people who are finding ways to live together with some difference and to do that with grace.”
* General Synod, the governing body of the Anglican Church of Canada, is now “on path of sustainable budget equilibrium.”

* The Resources for Mission department (formerly the department of Philanthropy) is now launching a national and diocesan fundraising campaign, following consultations with every bishop of the church.