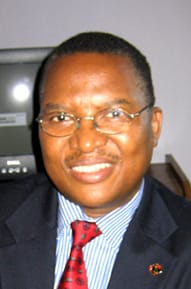 Bishop Mvume Dandala says corruption has made some Canadians critical of granting an unconditional cancellation of the developing world’s debts owed to international governments and financial institutions. He called on Canadians to work with African churches in condemning the role of developed nations in perpetuating corruption in the developing world.

Bishop Mvume Dandala, general secretary of the All Africa Conference of Churches (AACC), has urged Canadians to join African churches in condemning the role of developed nations in perpetuating corruption in Africa and the rest of the developing world.

“The matter of corruption is a matter that requires all churches to act together because there are two aspects of corruption,” said Bishop Dandala, who visited Toronto in September, in an interview with the Anglican Journal. “First, it is challenging our own people to actually confront this problem head on. There’s another problem and that is the fact that even the international world has developed values of wanting to deal corruptly when it cuts deals with people from the developing world,”

The bishop argued that others besides African churches need to speak out because “we’re not just speaking to the African people. It becomes the worldwide community that needs to speak to all the structures that deal with the people of the developing world, holding them responsible for their actions.”

Bad governance, which includes corruption, has made some Canadians critical of granting an unconditional cancellation of the developing world’s debts owed to international governments and financial institutions.

But Bishop Dandala, a South African Methodist who assumed the AACC’s top post in 2003, said, “It is totally wrong for people to feel that corruption is an African phenomenon. Greed is a phenomenon that affects the whole of humanity.”

During his meetings with church leaders in Toronto, including the Anglican Church of Canada’s acting general secretary, Ellie Johnson, Bishop Dandala had a simple message: “We need each other if we are going to overcome the problems of the world, a globalized world, a world that’s putting markets first. We, as the ecumenical family, should more and more say that God’s creation comes first, relationships with people and with our environment come first.” (The AACC is an ecumenical partner of the Anglican Church of Canada. The Anglican church provided a 2005 grant of $4,000 to cover administrative costs and work on Conflict Resolution and Human Rights.)

He also discussed how the AACC — established in 1963 as a fellowship of 168 national churches in 39 African countries — has been working jointly with the secular society in pushing for democratic reforms. “It’s crucial for the church to play a role in the expansion of civil society participation in issues of the continent. It’s easy for those who want to ignore (civil society) to say, ‘Do you have a constituency that is large enough for us to take you seriously?’ But they can’t say that about the church because the church is down there, it’s with the people,” he said.

Bishop Dandala said after the liberation of South Africa from apartheid, there was a “lull” in church advocacy of social justice. “There was even a tendency in the ecumenical movement for churches to want to retract back to their denominationalism,” he said. “And of course they realized quickly that you do not sustain an impact as church if you just want to act denominationally.” He said the HIV/AIDS pandemic in Africa galvanized churches to act together.

Bishop Dandala also urged Canadian churches to become part of an ecumenical movement that will ensure that Christianity — which is growing exponentially in Africa — “does not break down the social bonds that have made the African people withstand so much of the socio-political and economic bonds that have been perpetuated against the continent of Africa.”

He said that Africa is fast becoming an “epicentre” of Christianity, but there is growing concern about churches that only concern themselves with individual needs, perpetuating “an extreme form of individualism” in the life of the church. “People talking only about private sin, private salvation, private hope, private life,” he said.

“The temptation is always there for the church to just celebrate the growth of their numbers without worrying about what kind of impact they have on the communal life of our people,” he said.