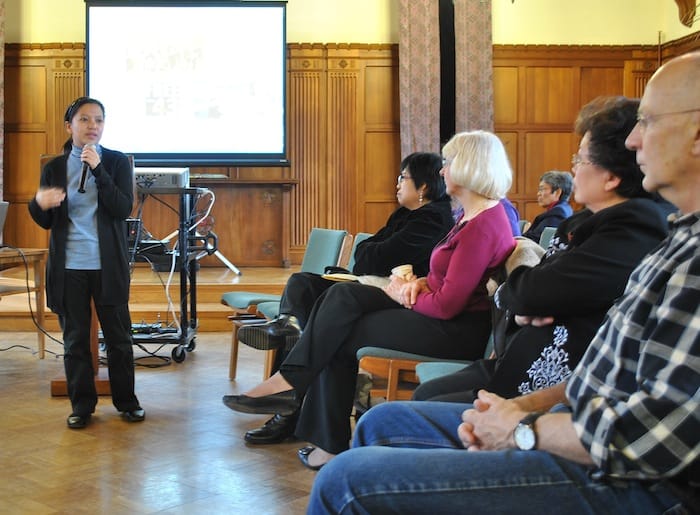 Three Filipino human rights advocates are asking Canadians to set the record straight about human rights violations in the Philippines.

Contrary to the Philippine government’s claim that “there are no political prisoners,” 347 people remain in custody, said Angelina Bisuna Ipong, coordinator of Ex-detainees Against Detention and Arrest.

Ms. Ipong, a former political detainee who was released last year after spending six years in jail, spoke at the Emmanuel College in Toronto on March 29. Her talk was part of a March 28 to April 16 tour organized by Kairos, the Canadian ecumenical justice organization (of which the Anglican Church of Canada is a member). The tour is co-sponsored by Stop the Killings Network-Canada, which includes churches, human rights and development organizations, and Filipino community groups “campaigning to end political killings of human rights defenders in the Philippines.”

Joining Ipong was Bishop Reuel Norman Marigza, General Secretary of the United Church in the Philippines (UCP), and Dr. Merry Mia-Clamor, coordinator of the Council on Health and Development and a former political detainee. All three will also speak in Ottawa, Montreal, Winnipeg and Vancouver as part of the cross-Canada tour.

“The climate of impunity still goes on,” said Ms. Ipong, referring to the government of Benigno Aquino III, who assumed office in June 2010. There have been 68 extra-judicial killings, 55 cases of torture and 81 cases of political detention since that time, according to Ipong, a community health worker who was arrested in 2005. While in jail, said Ms. Ipong, she was subjected to sexual assault and torture. “I thought to myself, ‘How could they do this to a 60-year-old woman?’ ” The government eventually dismissed all charges against her for lack of evidence.

His own church-which has been at the forefront of advocacy since the Phillipines was under martial law in the 1970s-has been labeled by the military as a “communist front,” he said.

Dr. Clamor, who was subjected to physical and psychological torture after being arrested with 42 other medical workers on suspicion of being communist rebels, credits pressure from international governments, as well as global and local human rights groups, for their release. Noting the importance of global solidarity, Bishop Marigza urged the Canadian government to raise the issue of human rights when discussing trade and aid with the Philippine government. In the meantime, said Ipong, Canadian citizens can help by sending letters to both the Philippine and Canadian governments seeking the release of all political prisoners and urging respect for human rights in the Philippines.

A review of the situation will be made by the United Nations Human Rights Council in May.