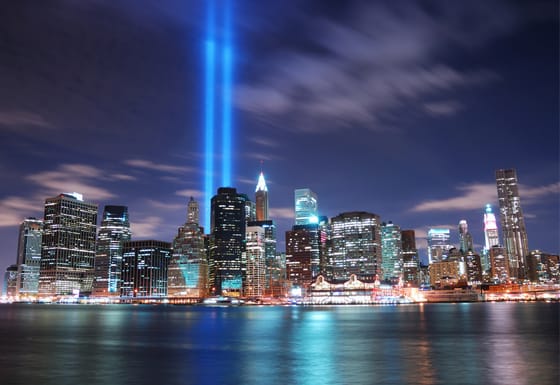 Just as the meaning of 9/11 is still being forged so do we make history by our own choices. Photo: Songquan Deng

This is a day of mixed emotion for churchgoers in North America. On the one hand, many parishes are celebrating some form of “Round Up Sunday” – when the congregation comes together after the summer hiatus. Sunday school registration takes place, a parish luncheon is served and ministries rev up again.

And yet, today happens to be September 11 – and ten years ago on a bright, sunny Tuesday morning the worst attack on any country in the western hemisphere happened in New York City, in Washington, D.C. and in the skies over Shanksville, Pennsylvania.

Many of us know where we were and what we were doing when we heard the news of the first attack. It was about 6:00 am in San Diego and I was in the bathroom shaving when Heather called out about a plane crashing into the World Trade Center. I immediately thought it was the pilot error of a small aircraft. Only when I saw the images on the television did I realize something far more terrible was happening.

The horrors of hell – how else do you describe that day? The 9/11 attack was an act of unmitigated evil designed to inflict the maximum number of casualties possible in the most shocking way possible.

When I practiced law in New York, my law firm would often have dinner parties at Windows on the World – the restaurant at the top of the first tower. So many happy occasions, so many joyful memories of people eating fine food in a beautiful atmosphere. When the first plane struck the tower, there was a breakfast being held at Windows on the World. Everyone in the restaurant was killed that day. No one had any chance to escape.

Buildings burning so intensely that people chose to jump out windows rather than face the fiery inferno. That is a picture of hell.

And yet, in the midst of hell was grace, amazing grace. If you have ever wondered what God is like, on 9/11 we got the answer: God is like the firefighters who ascended the steps of burning buildings to save those who could not save themselves, even as office workers were descending those same steps to flee the carnage. So many firefighters and police died that day-more than 400 of them-so many profiles in courage, heroism and sacrifice.

And who could forget the stories of airline passengers and workers at the Twin Towers, knowing they would die, who called others to say, “I love you.”

And how about all the rescue workers who ploughed through the rubble in the coming days, desperately trying to find survivors or at least body parts-so many of these rescue workers have since died or now suffer from debilitating or terminal diseases as a result of breathing the noxious fumes and poison air in the days after the attack.

And what about those survivors who are still haunted by that day, unable even to live in New York anymore? “Too many memories, too much pain” is how one New Yorker put it who is now living in South Carolina. A woman who moved to Arizona said that she knew she had to leave the city when every time she saw or heard a plane that seemed too low or too fast or too close, she shivered that this was another attack. Or the rescue worker who admitted that for months after the attack, loud noises-anything from thunderstorms to slammed doors to sirens on his own truck-were enough to make him cower with anguish.

I still remember a woman whose husband died in the Twin Towers. One year after the attack, she was asked how she was coping with her loss. She said, “I can’t forgive them. I can’t forget what they did to my husband and to all the others. I break down in tears when I think about it.” Here was a person who hurt too much to forgive. Who could blame her?

This morning, in light of our gospel, I want to ask the question: Is it possible to forgive the unforgivable and move beyond the hurt that mars our life?

In our gospel, Peter puts a question to Jesus. “Lord, if someone sins against me, how often should I forgive?” Jesus responds by telling a story about a king who decided to collect the money owed him. The first man he contacted owed an enormous sum: 10,000 talents. In today’s terms, the man owed the king somewhere in the neighborhood of 30to 50 million dollars. There was no way the man could possibly come up with such a huge sum of money. At the daily wage at the time, it would take one hundred million years to pay off such a sum. Nonetheless, the king took pity on the man and forgave the entire debt.

The man had been given a new life, but he still acted like his old self. He promptly went to a friend who owed him about 17 dollars and demanded to be paid in full, immediately. When the friend asked for a little time to get the money together, the man roughed him up and had him thrown in jail.

The king discovered how this man treated his own debtor. He was outraged! Could not this man have shown the same forgiveness that the king showed him?

Jesus is saying that once we have experienced grace in our own lives that experience becomes the norm in our relationships with other people. Forgiveness is a choice to give priority to healing and not to hurting. Forgiveness means surrendering our rights for the sake of reconciliation- building on love rather than destroying in hate. We act generously and magnanimously to others because God acts that way to us. We forego the desire for revenge which only sets in motion endless cycles of violence. After all, “eye for eye and tooth for tooth” only leads to a blind and toothless world.

I’ll never forget one banner that hung prominently near the ruins of the World Trade Center after the attack. In big bold letters, the banner read, “NEW YORKERS WANT JUSTICE, NOT REVENGE.”

The pursuit of justice is always appropriate; revenge never is. How do we know if we are acting out of justice or revenge?

We know by our willingness to forgive others as God has forgiven us. The truth is: if we refuse to forgive those who hurt us, we not only suffer hurt, we suffer hate. And what could be worse in life than to go about hating others? If we are not prepared to forgive each other in this life, we will surely condemn each other to hell in the next life. C.S. Lewis is right. “We must forgive our enemies or be damned.”

Robert E. Lee was the greatest Southern general of the American Civil War. In his book, Lee: the Last Years, Charles Bracelen Flood reports that after the war, Robert E. Lee visited a Kentucky lady who took him to the remains of a grand old tree in front of her house. There she bitterly cried that its limbs and trunk had been destroyed by Northern Artillery fire. She looked to Lee for a word condemning the North or at least sympathizing with her loss. After a brief silence, Lee said, “Cut it down, my dear Madam, and forget it.”

That may be difficult for the survivors of 9/11, and even more so for a proud nation. After all, we should never forget those who suffered, sacrificed and died in the tragedy of that awful day.

And yet, Lee’s advice remains valid: “Cut it down.” Cut down the anger. Cut down the desire for retaliation. Cut down the drive for revenge. Cut down the petulance that destroys us as much as the enemy. These are the real killers: for they kill our souls, our sense of self and our peace of mind.

Yes, the 9/11 attack was an act of incredible evil that cries out for justice. Every nation has a right to protect itself from aggression and to seek to defeat those enemies who seek to destroy it. Sometimes, force is the only appropriate response to violence, because peace needs to be protected and not just maintained. Edmund Burke’s well-known maxim remains true: “The only thing necessary for evil to triumph is for good people to do nothing.” In a civilized world, the pursuit of justice is imperative: to insure that the guilty are held accountable for their crimes.

Yet even so, Christians can still forgive by refusing to let hate have the last word in our lives. “Unbelievable” you say. And it is! God enables us to do the miraculous in the face of the impossible. We can forgive others because God forgives us. We can make peace with our past through the Christ who gives us the peace that passes all understanding. We can choose to build a better world rather than to remain a bitter people. We can refuse to give in to despair and affirm our hope that tomorrow can be better than today because God’s love is without end and God’s mercy is new every morning.

I would remind you: history is not made by somebody else in some other time and place. No, we ourselves make history by our own choices. The meaning of 9/11 is still being forged. It is in our hands and hearts.

The Rev. Dr. Gary Nicolosi is the rector at St. James Westminster Anglican Church in London, Ont. , where he gave this sermon on Sun. Sept. 11, 2011.